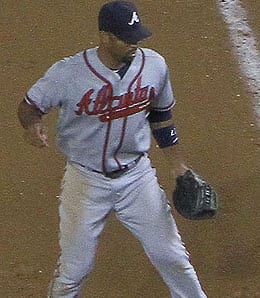 Troy Glaus, a player that enjoyed a fine first half batting cleanup for the Braves — but lost most of his value when Derrek Lee came to town — is looking for work.

He’s a big dude and is massively strong, but is also massively injury prone, and missed time down the stretch because of a knee injury.

The big problem with Glaus is that he’s a DH that was stuck in the National League in 2010. Let’s face it – he can’t really field any more, and that was painfully obvious as the Braves waited until it was too late to relieve a struggling Brooks Conrad of his duties at second base in the NLDS, finally putting Glaus in at third and shifting Omar Infante over to the keystone corner. Unfortunately, it was too late to save Atlanta’s season, and the fact that Glaus was riding the pine for most of the series speaks more to his fielding deficiencies than his lack of hitting. Like I said, this is a DH in waiting here. I mean, if Atlanta really thought he could still handle the hot corner, why didn’t he see action there after Chipper Jones went down?

As discussed, Glaus had a productive first half, driving in 56 runs by the end of June. Unfortunately, he only managed 15 more ribbies from July on thanks to spending most of his time as a highly paid pinch hitter (when he wasn’t hurt, of course).

Somehow, he managed to strike out 100 times despite receiving less than 500 plate appearances, and that helped pull his BA down to its lowest level in a full season since 1999. Injuries sapped him of his once-modest speed years ago, but it was the decline in Glaus’s power that was most alarming – a .400 slugging percentage?

Glaus will only qualify at first base in 2011, and that hurts his Fantasy value even more, but can’t we expect his power to bounce back at least somewhat? Health will be the key here – will his back and legs be strong enough for him to generate enough long balls to compensate for his middling to weak batting average and complete lack of speed?

If Glaus still qualified at third, he’d be a decent Fantasy option, but stacked up against the boatload of high producing first basemen, he’s a weak alternative.

We know the Braves won’t want him back, as they’re going to let fellow free agent Lee also walk and hand the job to top prospect Freddie Freeman. But that’s fine, because as we mentioned, Glaus would be best served landing a job on an AL club where he can spend most of his time DHing.

One possibility is that the White Sox will give him a shot. They went with a DH by committee in 2010, and that didn’t work out so well. They will badly need another power bat if Paul Konerko is lured elsewhere.

It’s hard to accurately gauge what Glaus’s value will be next season until we know how big a role he’ll play wherever he lands, but assuming he gets 500 plate appearances and isn’t asked to tax his body in the field, he should produce 25 homers, 85 RBI and a BA of around .260.

Lohse isn’t a free agent this offseason, thanks to what is now looking like an ill-advised four-year, $41-million extension the Cards gave him after his fine 2008 campaign, but man, I bet they wish that contract was coming off the books.

But the mere fact that St. Louis has this much money tied up in Lohse guarantees that he’ll be part of its rotation next season. We ranked Lohse 109th among starting pitchers at the beginning of 2010, but he didn’t even produce top 300 results in one of the worst seasons of his career, one marred by a forearm injury that required surgery and cost him a couple of months.

Even his normally good control wasn’t as sharp and he was beaten like a stepchild during the time he was healthy enough to take the mound. Dave Duncan helped revive Lohse’s career once before, so there’s always hope, but going into 2011, he is undraftable in all formats. If he shows you something, fine, use him as a streaming option, but don’t even bother putting him on your cheat sheet.