Dear RotoRob: Is Reynolds for Real? 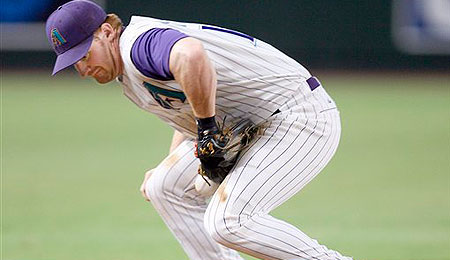 An injury to Chad Tracy (seen here playing with the ball like a bag of toys) has opened the door for Mark Reynolds to make a huge impact in ‘Zona.

A couple of thoughts — Chad Tracy went on DL. I picked up Mark Reynolds. Is this guy the real thing?’
‘
I had an interesting conversation with another guy in my league. Do you ever root against your real life team vs. your fantasy team? It’s hard to admit, but when my beloved Mets went against my Braves’ closer, I was rooting for the save. Rationale: the Mets would still be in first place and, besides, the season is young. My friend said he would never root against his real life team. If it was a do or die game, I agreed. Believe me, this was not easy to admit.’Your thoughts?

Thanks, man’..up here in Canada, we don’t actually celebrate Memorial Day (we had our equivalent last weekend), but Happy M-Day to you!

Reynolds, as I wrote in the last Wire Troll column, is a great short-term pickup. I think he’s making a great statement to stick around once Tracy returns, but as far how much PT he’ll get, it will be limited. Still, he’s certainly put himself on the map.

As for your problem of rooting against your home team, this is an ongoing issue for fantasy owners. In fact, I covered this very topic in the first column I ever wrote on Creativesports on May 24, 2004. I think it summarizes my thoughts on the matter perfectly. Enjoy:

Not to get all Carrie Bradshaw on you, but I’ll ask anyhow: Can playing fantasy baseball make us lose our love of the actual game of baseball?

Picture this: a few weeks ago my girlfriend and I were at the Red Sox-Jays game to watch what turned into a brilliant pitching performance between Pedro Martinez and Roy Halladay. I mean, who couldn’t get into that? Well, for starters, the two roto geeks sitting behind us.

From the moment they sat down these two engaged in a non-stop rant about the beating that Halladay’s WHIP was taking with all his walks, how many fantasy points Jason Varitek was racking up for them or who had just homered in an out-of-town game.

Now don’t get me wrong. I’m a long-time numbers hound who has misspent many an hour pouring over stats sheets. And I can certainly appreciate the desire to see our fantasy players excel when we’re at the game.

But I have to ask, is it possible that fantasy ball has created a certain single-mindedness among its players where we become more concerned with our roto team’s performance than our favorite MLB team’s performance? Are we more worried about OPS than the quirky intricacies of the game, the same game that assumedly got us interested in playing fantasy ball in the first place?

While those two behind us were moaning about Eric Hinske’s plummeting batting average and Bill Mueller’s lack of production this season, they were missing one of the finest pitching performances I have seen in the past few offensively dominated years.

The pure beauty of two bulldog pitchers going at each other, neither willing to give an inch to their opponents, each man getting on base becoming an event as the teams desperately tried to do anything to scratch out a run ‘ this is the essence of the game that we have all grown to love. And that pair behind us were missing it all in their blind need to have their individual players succeed, independent of whatever was happening in the specific game situations.

In the eighth inning, with the Jays mounting one of the precious few offensive rallies the game would witness, I turned to my girlfriend and wondered aloud to her why Red Sox manager Terry Francona didn’t remove an obviously tiring Pedro for lefty Alan Embree to face a hot left-handed hitting Carlos Delgado. She shrugged her shoulders and gave me her best ‘Yes-I-like-baseball-but-don’t-analyze-it-to-the-freakish-extent-you-do’ look.

Seeking more complete answers, I turned to the roto geek behind me and asked him ‘Why wouldn’t Francona bring in Embree to pitch to Delgado?’ In response, I got a blank, dazed look. I think I interrupted him while he was calculating how his fantasy team’s ERA was being affected by Mark Buehrle’s performance that day.

It seems (according to the out-of-town scoreboard, which was dominating his attention more than the gem being pitched on the field) the Yanks had jumped on Buehrle and the Chisox for seven runs in the top of the first inning and the game was now in a rain delay. Every time the score for that game was shown on the board, he kept praying for the rain to continue so the game might be cancelled, thereby taking Buehrle off the hook. I didn’t have the heart to tell him that it might make more sense for his team if the rain stopped sooner rather than later so Buehrle could return to the mound. Because it was a day game, and it wasn’t getaway day, I reasoned, the umps would wait quite a while before calling the game. So if Buehrle was able to return after a short enough delay, he might actually get to pitch some shutout innings and have a chance to work off that bad inning.

I never bothered to mention any of this to him. Not only did I imagine he probably wouldn’t be able to see the bigger picture of my logic, but I also figured it would take too much time to explain it to him and I was otherwise engrossed in a fantastic ballgame. Too bad he missed it.