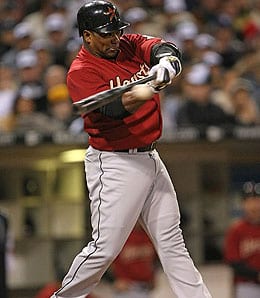 You know you’re hard up for cash when Wes Helms is your highest paid player. (Reuters) We’ve been remiss on keeping up to pace with our baseball off-season coverage, focusing lately on basketball, hockey, and, of course, the NFL playoffs. But don’t worry, we’re already planning the 2009 RotoRob Fantasy Baseball Draft Kit, so before […]

We’ve taken a bit of a breather from the report, as we focus on football season, our now-rolling NBA Draft Kit, and the kick off our hockey coverage. But we’re back, baby, to once again examine the aftermath of George Mitchell’s legendary report, nearly a year later. Here is the rest of the series: Parts […]

Todd Pratt, who reportedly juiced up in the early part of this decade, last appeared in The Show in 2006 as a Brave. The report rages on! You can find previous parts here: Part I, II, III, IV, V, VI, VII and VIII. Todd Pratt Kirk Radomski said he first met Pratt after he joined […]

After a breather of a few days, we’re back with our never ending series on the Mitchell Report. Missed our series so far? Catch up with Parts I, II, III, IV, V, VI and VII. Get yourself a tall latte first. As an aside, let’s give a tip of the hat to dearly departed Paul […]