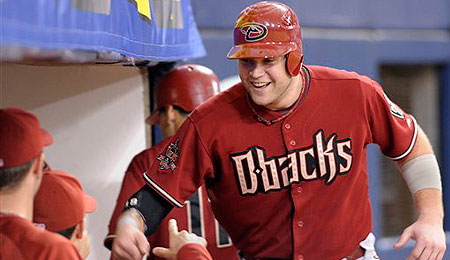 Chris Snyder’s pop was sweet, but his inability to hit his weight hurt Zona.

Well, the American League is done, so we now turn our attention to the Senior Circuit’s free agency scene. For those of you (shame on you) who missed our exhaustive AL series, you can find it here:

Expectations were sky high for this young, up and coming team after its surprise 90-win campaign and playoff appearance in 2007. And after blazing out of the gates with a 19-7 start, the Snakes sure looked like they were headed for greater things in 2008. And then the wheels fell off. An offense that overachieved early on came back to earth and the bullpen imploded. The team enjoyed only one winning month after April, going 63-73 over the remainder of the season. Needless to say, they were unable to return to the playoffs for a second straight season, and it’s clear this team needs work to get back into contention in the NL West.

Certainly the rotation was not the problem. Anchored by staff ace Brandon Webb, the D-Backs led the NL in quality starts. But the lineup left something to be desired, finishing 14th in batting average and stolen bases. Chris Snyder showed improved power, but his average has been slipping for a couple of seasons. And while Justin Upton enjoyed a strong season, he doesn’t exactly have his older brother’s speed (although he did show moderate speed when he was a minor leaguer).

A healthy Eric Byrnes could make a big difference to the D-Back attack. After a lost season, he’ll need to work hard to regain his starting spot – something the team says he won’t be handed – but given that he’s the highest paid position player on the squad, I can’t seem them paying him big bucks to sit on the bench.

Orlando Hudson is all but gone, and the team has turned to Felipe Lopez as his replacement; unfortunately, this represents a downgrade offensively, so Arizona will need to address that disparity elsewhere in the lineup. The D-Backs had their sights set on Mark Loretta to act as part of a second base platoon, but they lost out on that free agent.

The bullpen situation was addressed to an extent with the acquisition of Scott Schoeneweis from the Mets. Better yet, the Mets will pick up a big portion of Schoeneweis’s salary and all is cost Zona was underwhelming minor league reliever Connor Robertson, who was unimpressive in Triple-A last season.

The rotation will likely lose the ancient Randy Johnson to free agency, but with Max Scherzer ready to take the hill every fifth day, that won’t be a huge issue.

Unfortunately, the cost-conscious Diamondbacks have seven free agents to deal with, including several key components of its lineup, bullpen and rotation. So unless this team gets quite creative with its moves this offseason, it could find itself unable to turn in a third straight winning season, never mind making any progress to get back into the postseason.

Tony Clark, 1B: After spending three years in the desert, Clark left the D-Backs last season, taking much less money from the Padres than Arizona was supposedly offering. He spent the first half of the season in an extremely limited role in San Diego, doing next to nothing, before being dealt back to Zona, a move that didn’t exactly revitalize the aging switch hitter. He must have done something right, however; the Diamondbacks are talking about bringing him back to reprise his role as the backup at first base and a key bat off the bench. The word is they are close to an agreement, but I think Clark’s most valuable asset now is as a veteran presence on a young team. Unfortunately, that’s not exactly a fantasy category.

Juan Cruz, RHP: Cruz was one of the bright spots in a beleaguered D-Back pen last season, cutting his home run rate and enjoying a career year, so he’s bound to be pursued by many teams this offseason. Detroit definitely could use some bullpen help, especially since it has swung and missed at a top-notch closer so far. The Dodgers are also looking at Cruz, and Texas may make a run at him and use him as its closer, something that would likely help lure him.

Adam Dunn, OF: While 40 homers (five straight years) and 100 RBI (four of last five) is pretty much a guarantee with Dunn, he wasn’t having a banner season in Cincy, and didn’t improve after landing in Arizona as a rent-a-player in a move that didn’t help shake the Diamondbacks out of their doldrums. He remains one of the NL’s most dangerous left-handed bats, but I don’t think he’s going to get the mega deal he seems to think is a given. I also don’t think anything will happen with Dunn until next month. Apparently, Toronto has looked at him, but I think that might be a joke given Dunn’s legendary slagging by Jay GM J.P. Ricciardi. There’s plenty of top-notch corner men on the market, so that will restrict his value to an extent, but one team that has been rumoured to be interested is Atlanta. The Yanks may also be players here and the offensively-challenged Giants may even make a run for him. Could Tampa Bay try to make a splash? It’s not inconceivable. Also, the Halos have reportedly had preliminary conversations with Dunn’s agent.

David Eckstein, SS: In a half season, Eckstein might have done more to render the Toronto offense toothless than any other player. Not only did he accumulate 260 at bats in which he failed to properly set the table – 141 of which were at the lead-off spot, where he particularly was rancid – but he was also the man who collided with Aaron Hill, knocking one of the most important hitters in the Jay lineup out for the season with a concussion. Finally, Eckstein was dealt to Arizona, where he was even worse down the stretch. Atlanta, having struck out with Rafael Furcal, may turn to Eckstein as a poor substitute. Apparently the Pirates, never strangers to signing mediocre players, are also interested.

Orlando Hudson, 2B: Although Hudson’s season ending early because of injury really helped expedite the Arizona swoon, he was excellent while he was in there. After setting a career high with 70 walks in 2007, the O-Dog did not show as much patience last season, but he still hit for a career best .305 with good pop for a middle infielder. Also a stellar defensive player, Hudson was one of the few bright spots in an otherwise moribund Diamondback offense, but he is virtually out the door – especially since the club has brought in Lopez to take his place. Might Toronto look to bring back the player it developed in its system? Ricciardi mentioned his name recently as someone who is still available.

Randy Johnson, LHP: After flaming out with the Yankees in 2006, Johnson’s career has been somewhat revitalized since heading back to the desert. But let’s face it, even though he stayed healthy last year, he’s just a six-inning starter these days whose days of domination are long gone. The Big Unit has become more hittable now, but he remains a solid starter that can help a staff despite a record last season (11-10) that didn’t make anyone swoon. The sure-fire Hall of Famer is within shouting distance of his 5,000th career strikeout, and I’m sure he’d like to reach that plateau (not to mention the five wins he needs to hit 300) before calling it a day.

Brandon Lyon, RHP: Lyon encapsulated the D-Back bullpen woes, as he was way too hittable, struggling in the closer role before finally being replaced. The Tigers are still trying to claw their way to a better bullpen, so may peg him as their 2009 closer after failing to land bigger targets.

Next: We head east to Atlanta, to check in on a Braves’ team in serious need of retooling.

By RotoRob
This entry was posted on Sunday, December 21st, 2008 at 1:12 pm and is filed under BASEBALL, Free agents, RotoRob, Rumours. You can follow any responses to this entry through the RSS 2.0 feed. You can skip to the end and leave a response. Pinging is currently not allowed.