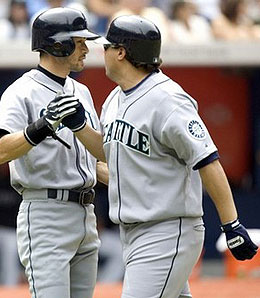 While Ichiro’s offseason was partially to blame for the demise of the Mariners’ offense in 2008, Jose Vidro (right) was absolutely pathetic, finally getting ditched by the team in August. (Reuters)

We continue our tour around the bigs, examining the free agents for each club, with another segment today. Previous parts can be found here: Part I, II, III, IV, V, VI and VII.

After winning 88 games in 2007, expectations were high that the Mariners could compete for the AL West title and get back to the postseason for the first time since 2000. Instead, the offense completely tanked, and this team hit rock bottom, winning a mere 61 games — its worst showing since 1983.

If you’re looking for a bright spot in Seattle’s 2008 season, the club did finish sixth in the AL in stolen bases thanks to a nice comeback year (running wise, at least) from Ichiro Suzuki.

However, with just one AL team scoring less runs and having a worse on-base percentage, slugging percentage and OPS, it was pretty clear where the Mariners’ problems lay. There were culprits aplenty, but to pick on a few, I’d target Jose Vidro, who was so unproductive that the team finally DFAed him in August; Kenji Johjima, who’s extra base power last showed up on a milk carton; Yuniesky Betancourt, who simply doesn’t get on base enough to be a legitimate fantasy option; hell, even Ichiro struggled, relatively speaking, especially as far as his extra-base pop went.

With four last place finishes in the past five seasons, the Mariners really need to do some serious retooling. On the plus side, they have just three free agents to deal with, and just one of those was an integral part of the team.

Willie Bloomquist, OF: Bloomquist’s role has been on decline for the past couple of seasons, and the fact the he managed just one extra-base hit all year long negated his improved patience and decent SB numbers. The Mariners have plenty of prospects on the way, so there’s no need for them to re-sign this veteran utility man, hence they did not offer him arbitration.

Miguel Cairo, IF: Believe it not, Cairo is 34, not 44. He actually enjoyed a decent year off the Mariner bench, recording his highest hit total since 2005. However, Cairo’s speed has deteriorated and he never had much pop to lose. The Mariners have not offered him salary arbitration, and like Bloomquist, he’ll be replaceable. The fact that Seattle signed Russell Branyan probably is the final nail in the coffin on Cairo’s chances of returning to Em City.

Raul Ibanez, OF: Ibanez enjoyed another strong season, setting a new personal high in at bats, scoring a surprising amount of runs considering how crappy this offense was and pacing the team in OPS for a third straight year. The fact that he was as productive as he was on this team, despite a slight uptick in his strikeout rate, is a testament to Ibanez turning into a legitimate fantasy stud in recent years. Put this bat in a better lineup, and how many runs would he drive in? We may find out, as Ibanez is expected to decline the Mariners’ arbitration offer. Tampa Bay is seeking a left-handed DH, and Ibanez could fit the bill. Or Philly might target him as a replacement for Pat Burrell in left field. The Mariners will also be players here, hoping to re-sign the veteran. Apparently, the Jays are also looking at Ibanez, and the Cubs and Mets are possibilities, too.

The Rays were the story of the year in 2008, finally breaking through in Season 11 of their existence and not only busting their playoff cherry, but coming within three wins of a World Series title.

While they had showed some modest improvements in 2007, the team absolutely exploded last season, winning 97 games (they had never topped 70 victories before) to take home the AL East crown.

Speed was the calling card of this club, as it paced the AL in thefts in no small part thanks to B.J. Upton doubling his career high with 44 swipes. Where this team could use a boost is in hitting, however. Only one AL team had a worst batting average than the club’s .260 mark. A good place to start working on that would be finding an upgrade over Gabe Gross in right field; at the very least, he can’t be allowed to have a single at bat against a lefty.

The Rays will probably also be seeking some bullpen insurance, especially with closer Troy Percival undergoing back surgery this offseason and one of their relievers having already bolted from town.

Any way you look at it, though, the Rays have arrived and aren’t going anywhere except up for the foreseeable future. With four free agents to deal with (a couple of which were key cogs of the team) and some tweaking necessary in others areas, they do have some work to do this offseason as they take aim at the ultimate prize in 2009.

Rocco Baldelli, OF: Injuries continues to decimate Baldelli’s career, limiting him to 80 at bats in 2008. However, once he returned, he showed some nice gap power. I don’t like the fact that he’s striking out more and that his speed seems to have gone AWOL. He probably fits in nicely as a platoon partner for Gross in RF, considering Baldelli hits lefties very well, while he struggles (just .219) against righties. However, that would leave him on the weak side of a platoon, rendering him useless from a fantasy perspective. So if someone offers him a larger role (Philly, seeking a cheaper option to replace Burrell, or Boston, hoping to bring in a local boy?), I’d guess Baldelli would jump at the chance. However, given his condition (mitochondrial disorder), I’m not sure anyone is going to hand him a full-time gig – at least not without have a serious insurance policy on the bench. At this stage, Baldelli is most likely a role player until he proves he can handle more.

Cliff Floyd, DH: Injuries – the story of his career – reared their ugly head once again, relagating Floyd to strictly DH duty in 2008. His speed has long since been decimated, but he remains an impressive power bat off the bench. There’s a real possibility that Floyd racks ‘em up this offseason, and if Tampa Bay decides he no longer fits on the team as it’s constructed, I wouldn’t be surprised if this is the end of the line for him.

Eric Hinske, OF: Despite his second-half woes, Hinske was a very pleasant surprise for the Rays in 2008, rediscovering his power and reaching 20 homers for the first time since he was a rookie. He was quite productive in his role, and even flashed some speed for the first time in many years. The Rays may bring him back if it makes sense based on their other moves, or he could wind up a DH somewhere, such as with the Yankees.

Trever Miller, LHP: Miller improved his control somewhat, and that helped him bounce back after an off year in 2007. He’s a situational lefty who will need to be replaced in Tampa Bay, as he’s already gone, having signed with the Cardinals for one year.

Next: we’ll head west again, checking in on the Texas Rangers.

By RotoRob
Tags: Free agents
This entry was posted on Sunday, December 7th, 2008 at 3:46 pm and is filed under BASEBALL, Free agents, RotoRob, Rumours. You can follow any responses to this entry through the RSS 2.0 feed. Both comments and pings are currently closed.