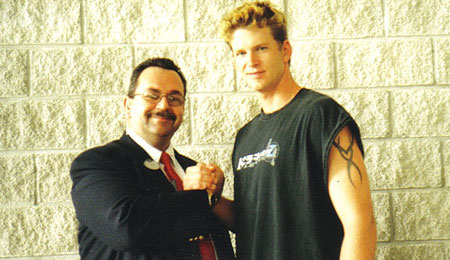 A.J. Burnett, lured out of the Great White North by the overpaying Yankees, is seen here with his bodyguard. No, I’m not kidding.

This is it — the final installment of our Free Agency Report on the American League. Today, we check in on the situation in Toronto, and then we’ll launch into the National League in the coming days. You can find the previous sections of this tome here: Part I, II, III, IV, V, VI, VII, VIII and IX.

Despite the improvements, mostly led by the AL’s top pitching staff, this team finished a disappointing fourth in the AL East behind perennial contenders Boston and New York and the AL’s newest superpower – Tampa Bay. Toronto’s stretch of meaningless Octobers has now been in effect since its last World Series title in 1993.

How the hell is Toronto ever supposed to compete with three teams that are sure to be dominant for years to come? This challenge seems especially insurmountable now with the Canadian dollar currently suffering, meaning the Jays will be watching their loonies closely this winter. A.J. Burnett is already gone; could Roy Halladay be next? Don’t scoff – the idea that Toronto may deal its ace isn’t so far fetched. B.J. Ryan could also be out the door, perhaps headed to Detroit to help solve the Tiger bullpen woes.

Stripping the club of its pitching depth will hurt considering this is what led the team to another winning season with Toronto pacing the AL in ERA, BAA, OPS against and WHIP. Scott Downs enjoyed a career year in a set-up role, while Jesse Carlson excelled in a similar role. Halladay turned in another Cy Young type of year, while Shaun Marcum enjoyed a breakout year (but will unfortunately miss the 2009 season after Tommy John surgery).

Offense was the Achilles’ Heel of this squad, as the Jays ranked a woeful 11th in the AL in runs, slugging percentage and OPS. Matt Stairs couldn’t come close to duplicating his fine 2007 season and then was dealt to eventual World Champion Philadelphia; Marcos Scutaro wasn’t bad considering how low the expectations were, but giving over 500 at bats to a sub-700 OPS dude with no power? Uh, yeah…; and Rod Barajas proved once and for all that he is not a legitimate starting big league catcher (of course his lack of offense wouldn’t stick out nearly as much in a lineup that was capable of scoring more runs).

Toronto will have to be very creative this offseason if it hopes to improve its squad, especially given that the team can’t add any more payroll. Unfortunately, the Jays have four free agents to deal with, and while only one made a huge contribution in 2008 – this team will need to do some retooling this winter. The club seems further away from its glory years than ever, somewhat ironic given that the team it beat in the ’93 Series finally made it back this year and won it all.

A.J. Burnett, RHP: Burnett finally stayed healthy, setting career highs in games, innings, strikeouts and wins. And although his peripherals were actually somewhat stronger in 2007, Burnett picked a perfect time to win 18 games and then opt out of his contract and trigger free agency; he’s agreed to a preliminary deal with the Yanks for five years and $82.5 million. Ka-ching! The Braves were also very interested in Burnett, although many believe the Yanks spent way too much on an overrated arm. It will be very interesting to see how he does pitching for the first time in a pressure-packed situation. Sure, he’s got post-season experience from his Marlin days, but pitching in the Bronx Zoo is a whole different kettle of fish. Does Burnett have the right makeup to succeed there?

John Parrish, LHP: Parrish pitched extremely well in Triple-A, earning some time in both the rotation and the bullpen for the Jays. He surrendered too many homers, but offset that with his improved control, thereby managing to revitalize his career somewhat. The Tigers, hoping to shape up the black hole that was their bullpen in 2008, have been showing interest in the veteran southpaw.

Brad Wilkerson, OF: Hmm, let’s see….now he’s a bad hitter as well as a poor fielder. Yikes. Patience – once one of Wilkerson’s strengths – disappeared last season, taking his BA even further into the abyss. I’m sorry, I’m just not seeing a recovery any more. Wilkerson will probably have to sign a minor league deal and earn his way back to the majors.

Gregg Zaun, C: An elbow injury helped expedite a diminished role for Zaun in 2008, and with his gap power shrinking for the past couple of years, he’s just not a productive bat any longer. His decent on-base skills have also been in decline. Still, there are teams making inquiries about the vet backstop, including the Tigers, the ‘Stros and the Orioles, who would love a veteran presence to help usher in the Matt Wieters era in B-More.

Next: We’ll head over to the Senior Circuit and start making the rounds.

By RotoRob
This entry was posted on Sunday, December 14th, 2008 at 3:30 pm and is filed under BASEBALL, Free agents, RotoRob, Rumours. You can follow any responses to this entry through the RSS 2.0 feed. You can skip to the end and leave a response. Pinging is currently not allowed.