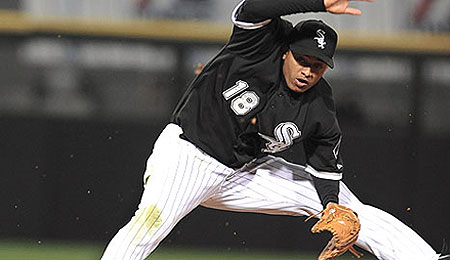 Orlando Cabrera is one of the top shortstops on the market this offseason.

We continue our look at major league free agents, discussing rumours and possible outcomes. Part I can be found here.

The White Sox completely erased the memories of an awful 2007 season by turning around all facets of their game and winning 89 times en route to the AL Central title. Although they lost to eventual AL Champion Tampa Bay in four games in the ALDS, it was a great season for the South Siders. And, for the most part, they will return in 2009 intact, with just six free agents on the books. However, there are some key players among them, so the ChiSox may definitely have some work to do this offseason as they look to build a team capable of contending for the American League Championship.

Orlando Cabrera, SS: Although Cabrera slipped somewhat both offensively and defensively, he remains a durable, steady shortstop. As we discussed in Part I, there are plenty of shortstops hitting the market this winter, but few are great options, with Rafael Furcal, Cabrera and Edgar Renteria heading the list. There are several teams that could be seeking someone like Cabrera, but the White Sox aren’t expected to make an effort to retain him. The Angels feel like they were let down by their shortstop play against Boston, and plenty of people would love to see Cabrera back in Anaheim, but the team has so many middle infield options, that that scenario seems unlikely barring a major trade. Detroit is another team that will be seeking a shortstop, assuming Renteria bolts, but with Cabrera probably seeking at least a three-year deal, Motown is not a likely destination. Cleveland is a possibility, as the team could sign Cabrera and shift Jhonny Peralta to third, and St. Louis is another potential destination.

Joe Crede, 3B: After combining for just over 500 at bats the last two years, Crede needs to prove his back is sound. But when he was in the lineup last year, there was a lot of things to get excited about: he certainly hit much better than he did in 2007, showing a more productive bat, drawing walks at his highest rate ever and striking out less often. The power bounced back too, although not quite to the levels from his breakout 2006 season. Although the third base market is weak (with Casey Blake being the only other decent option), Crede is surely all but gone from the White Sox with Josh Fields expected to take over. However, Crede could stay in the division if Cleveland opts to plug its third base hole with him. Milwaukee could use a solution at the hot corner and there’s talk that even Texas could make a play for him, moving Chris Davis over to first base and shifting Hank Blalock to DH. Then again, what if Fields isn’t ready for the full-time job in Chicago? It’s not as if he hit the cover off the ball in his limited big league action this season (in fact, he sucked). Well, there’s talk that the White Sox are eyeing another Cuban defector and hoping lightning strikes twice after the wonderful success enjoyed by Alexei Ramirez last season. The White Sox apparently have the inside track on 19-year-old third baseman Dayan Viciedo, cleared for free agency by MLB on Friday. He would offer a great long-term solution at the hot corner in Chicago, but given his tender age, might not be ready for the job right away.

Ken Griffey, Jr., OF: After rebounding in 2007, The Kid suffered through his worst offensive season since…well, since he was a kid. He still has gap power, but no speed to speak of any more and he’s no longer capable of making more than the occasional token appearance in centrefield, once his full-time domain. Could Griffey be headed back to Seattle for his last hurrah? It’s a possibility. We do know that after the Sox declined his option, the future Hall of Famer is not likely to return to Chicago, but where he will emerge – and if he’ll have a full-time role there – is still very much up in the air.

Toby Hall, C: Hall hit better than he did in his first year in Chicago, but that’s not saying much. Considering he hasn’t even had 130 at bats in either of his seasons for the White Sox, he’s probably itching to get out, and after they declined his option, Hall is likely headed elsewhere, even if some suggest he may return.

Horacio Ramirez, LHP: Ramirez looked like he was back on track last season until, that is, a mid-season deal landed him in Chicago. After that, he was beaten worse than a stepchild, thereby sealing his fate in the Windy City. It’s possible the Tribe will take a look at him, but at this point Ramirez is a fringe major league reliever, and it wouldn’t shock me to see him wind up in Independent ball or something like that.

Juan Uribe, 3B: Uribe might have had one of the most profound effects on Chicago’s title hopes when his hamstring injury in May allowed Alexei Ramirez to take over the second baseman job, a turning point for the Sox. Reduced to a part-time player, Uribe hit a bit better than he did in 2007, and he proved he can be somewhat productive given enough PT, but that’s not going to happen with the White Sox. There’s a chance Pittsburgh might look at Uribe at shortstop if Jack Wilson is dealt, otherwise he may have to settle for another utility gig.

For a team built to compete for the World Series, the Indians were an awful disappointment in 2008. In fact, it took a strong finish (35-21 after July 30) just to scramble to the .500 mark by season’s end. The offense has been sliding since 2006, but the recoveries made by the pitching staff in 2007 all when for naught, as the staff backlid again last year.

The starting rotation showed some promise (and Cliff Lee was a wonderful surprise), but was obviously weakened after C.C. Sabathia was dealt away. Meanwhile, the bullpen – especially the revolving door that was the closer spot – was a mess, finishing with the second worst ERA in the majors. That will need to be addressed in a big way this offseason if this team has designs on competing for the AL Central crown in 2009.

Fortunately, the Indians have very few free agents, and really none that matter in the grand scheme of things.

Brendan Donnelly, RHP: The Indians hoped to catch lightning in a bottle with Donnelly, signed for a song as he was coming off an injury that cost him most of 2007. However, it didn’t work out. After spending most of 2008 rehabbing in the minors, he got shelled shocked in Cleveland, and his control was simply abysmal. There’s a chance the Tribe may have another look at him, but if so, any deal would probably be done much closer to Spring Training after the team has exhausted other options to improve the pen.

Scott Elarton, RHP: Elarton pitched well in the minors as a middle reliever, and surprisingly kept up the strong work when Cleveland promoted him. However, he wound up on the restricted list for non-baseball medical reasons and never pitched again after June. He’s in all likelihood done as an Indian, but it would nice for him to get another chance somewhere considering he actually looked decent last season.

Sal Fasano, C: While he hit well, the dude got into 15 games last season, so does it really matter where he winds up? Frankly, I still think he’s best suited to work in a biker bar.

Juan Rincon, RHP: He sucked with the Twins and was only slightly better with the Indians, so although he’d like to return to Cleveland, I’m not sure the Tribe wants him back. Rincon’s already declining K rate slipped even further in Cleveland, so I’m finding it hard to envision that he’ll regain the (pre-juicing) form that made him one of the AL’s top set-up men.

Next up, we’ll continue our tour around the AL free agency scene with stops in Detroit and Kansas City.

By RotoRob
Tags: Free agents
This entry was posted on Monday, November 10th, 2008 at 5:59 pm and is filed under BASEBALL, RotoRob, Rumours. You can follow any responses to this entry through the RSS 2.0 feed. Both comments and pings are currently closed.