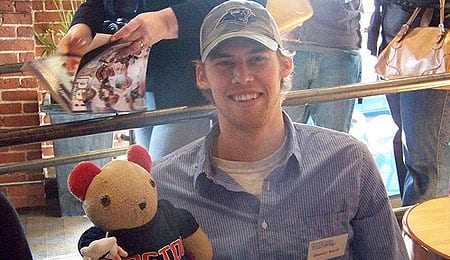 Daniel Bard and his little friend have been terrorizing AL hitters all season.

In this week’s edition of Saving Grace, we turn our attention to the Junior Circuit.

The clear closer in this organization is Kevin Gregg, especially since the trade of Koji Uehara. He only sports 17 saves on the season and his command has been spotty at best, but since July 16 he has continuously lowered his ERA from 4.00 to his current 3.40. July was Gregg’s worst month of the season as he gave up six runs in 9 2/3 IP. However, he’s thrown six straight hitless outings (the last three of which have been perfect) and could even bag a save early next week when the woeful O’s travel to Oakland. After blowing the save on Monday, eighth-inning man Jim Johnson is stuck on 15 holds.

Despite a rough stretch in June, closer Jonathan Papelbon’s game is improved from last year. His ERA is down to 3.14, he only has one blown save this season, and he has a one-hit August going so far with two wins and two saves in five appearances. He has yet to lose and his WHIP is at 0.99, its lowest since 2008. So much for those predictions that Papelbon was in danger of losing his job this year. Next in line is set-up man Daniel Bard who has been filthy good with 26 holds. Both Papelbon and Bard have been worked hard recently, no neither was available Wednesday. However, Boston has a much-needed off-day Thursday, so both of them should be good to go when the Sox travel to Seattle this weekend.

Closer Sergio Santos is rolling again, having held opponents scoreless in his last 11 appearances overal and in his last 29 on the road. He has converted six straight saves including two this week. This season, opponents are hitting a lousy .161 against Santos. With Chicago only four games behind first place Detroit in the Central, the White Sox should rely heavily on Santos to close out each close game.

Chris Perez has been falling apart since the All-Star break. His first half stats included 21 saves, one blown save, and an ERA of 2.43. Since then his ERA has climbed to 3.46, with only two saves and two blown saves. In his last 9 1/3 IP, Perez has given up eight earned runs. Unless he picks it up soon, the Indians will look at Vinnie Pestano, Tony Sipp or even Frank Herrmann to take over the closer role as they push for the playoffs.

Having bagged saves in each of his last seven appearances, Jose Valverde now leads the AL with 32 against zero blown saves. He has converted 13 straight and is a big part of the reason Detroit now leads the AL Central. Valverde, who is fresh now having had five days off, has saved at least 25 games in each of the last five seasons. With Valverde looking flawless this year, set-up man Joaquin Benoit (who already has more losses than last year in 16 less appearances) has no chance to earn saves.

At the beginning of June, Joakim Soria’s ERA was up to 6.55. He had seven saves and five blown saves, including three straight blown saves and losses to end May. Soria’s job was in jeopardy and he even lost some save opportunities because of his struggles. He got on a roll, lowering his ERA below 4.00 and topping 21 saves before hitting a major snag on Wednesday when he was shelled for three runs (two earned) in two-thirds of an inning as he tied for the MLB lead with his seventh blown save. Soria has probably bought himself a bit of goodwill with his otherwise strong pitching lately, so he shouldn’t have to worry about Aaron Crow or Greg Holland (who both allowed runs on Wednesday) taking his spot.

Rookie Jordan Walden took over as the Angels’ closer very early this season, and recorded his 26th save on Tuesday against the Yankees after Bobby Abreu hit a two-run homer off Mariano Rivera in the top of the ninth. Walden has put himself in the AL ROY conversation by being consistently solid since May with an overall ERA of 2.74. Scott Downs has 19 holds (good for a share of third in the AL), but got his sixth win Tuesday.

Matt Capps has struggled this year, and his 15 saves and 4.47 ERA wasn’t enough to hold off Joe Nathan from coming off the DL and reclaiming the closer job shortly after the All-Star break. Nathan had problems before he went on the DL in June, however after returning in July he recorded an ERA of 0.79 ERA with five holds and six saves. He’s endured some tough outings so far in August, but he bagged the save Wednesday night, his 255th as a Twin to set the new franchise record. Not bad for a dude that was a middling middle reliever before coming to Minny in 2004. If Nathan keeps scuffling, however, Capps could very well overtake him again.

What baseball fan doesn’t know this closer’s name? Mariano Rivera, the 41-year-old veteran, has helped the Yankees win multiple World Series. His next save with give him a ninth straight season of at least 30. The Yankees paid big bucks for Rafael Soriano to improve their bullpen, but he was not what they paid for with a 6.23 ERA on May 6 and an injury taking him out almost two months. Since returning July 30, he has been perfect in four innings and is now up to 12 holds on the season, however, Soriano is still a health risk, so the Yanks have to watch his workload closely. With Soriano healthy and Rivera’s backup, All-Star David Robertson pitching well, Rivera should be set up well after he blew Sunday’s save and lost Tuesday’s game against the Angels.

If I had to pick one closer as the bust of the year, it would be Brian Fuentes. After a solid 2010, Fuentes fell way off the board after his four straight losses in May. He’s pitched better recently, but hasn’t recorded a save since bagging his 12th on June 19 and has recently been placed on trade waivers. Shortly after that, Andrew Bailey reclaimed his old job, and has racked up six straight save opportunities including two this week. Grant Balfour is the other option, but he is better for holds, recording his 19th in Tuesday’s win over Toronto and the sign-stealing Blue Jays.

Brandon League has been a great closer for the Mariners and one of the most pleasant surprises in Fantasy baseball this year. It didn’t help when the Mariners lost 17 straight games, but League has 27 saves in 31 tries this season and is slowly pushing his ERA down, currently at 2.98. He has converted all three his save opportunities in August. Jamey Wright, who earned his 13th hold on Wednesday, would be next in line, but with League’s performance since May, I don’t see the closer job changing anytime soon in Seattle.

Kyle Farnsworth has quietly been excellent as the closer for the Rays this year, earning 20 saves with a 2.00 ERA. In fact, in a recent Baseball America survey, major league managers picked him as the second best reliever in the AL behind only Rivera. He has blown three of his last seven save opportunities, but averages about five saves a month. Joel Peralta, who has done a great job of putting out fires, is the other pitcher used in Tampa during late innings, but he only has one save. Farnsworth is clearly the best option for the Rays, but gets limited save opportunities compared to other closers in the league.

After his 40-save season last year, Neftali Feliz has managed just 22 saves with a 3.48 ERA so far this season. His overall performance hasn’t been nearly as elite as last season, and despite two wins and a save so far in August, he’s struggling right now. Both Texas backups were acquired in trades before the deadline, Mike Adams from San Diego, and Uehara from Baltimore. With his microscopic 1.16 ERA, Adams will work well setting up Feliz, and Japanese hurler Uehara has generally been very strong, but didn’t look sharp Wednesday.

Toronto’s closer job has been a toss-up between Jon Rauch and Frank Francisco. Rauch is the normal closer for Toronto, getting his 11th save last week. However, after Rauch blew the save on August 4, giving up three earned runs in extra innings, Francisco could be in store for a save soon. Acquired from Texas in the offseason, Francisco has not recorded a save since getting his 10th on July 4. This back and forth duel between Francisco and Rauch makes both of them risky pitchers to own in mixed leagues.