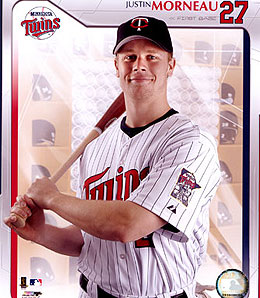 With Justin Morneau as a key cog in the attack, there was nothing wrong with the Minnesota offense in 2008.

We had to take a few more days off from the report, inundated by the work week. Stupid work week! Anyways, we’re back with our look at the free agency scene. Seeking previous parts of the report? Of course you are! And you may find them here: Parts I, II, III and IV.

After 2007 saw a streak of winning seasons that dated back to 2000 snapped, the Twins rebounded much quicker than anyone expected, winning 88 games last season and taking the White Sox to a one-game playoff before finally conceding the AL Central title.

Minny was driven by its offense, a lineup led by its JMs — no, not Schneider (although he does make tasty and versatile bacon), but rather Joe Mauer and Justin Morneau — that finished third in the American League in both batting average and runs. The pitching staff, however, was a bit too hittable, ranking 11th in BAA.

Whether that’s something the team will address through free agency or trade or simply organic growth remains to be seen at this point. The rotation certainly has plenty of room for growth – Francisco Liriano should be that much better in 2009 another year removed from Tommy John surgery and Nick Blackburn should improve his hit rates in his second season. However, despite his 12 wins last season, I’m not sold on Glen Perkins as the fifth starter, although I suppose you could do worse. The Twins will also need to address the loss of reliever Pat Neshek, who will probably miss the entire 2009 season after undergoing Tommy John surgery earlier this week, and with two of their free agents being southpaw relievers, that’s another area they’ll need to improve this offseason (although lefties Craig Breslow and Jose Mijares both impressed last season and Mijares in particular could be ready for a larger role).

It’s possible the Twinkies could parlay one of their glut of outfielders into some bullpen help or another starting pitcher.

Either way, this team made an impressive recovery from 2007, and with a mere four free agents this offseason – only a couple of which played key roles in 2008 – the Twins are in good shape heading into the final season of the Metrodome. That’s right, come Opening Day 2010, the Twins will finally be able to throw those Glad Bag walls into the trash where they belong as they open a new facility.

Adam Everett, SS: It was a lost season for Everett, as he endured two stints on the DL, the second of which was very lengthy. However, he was fairly productive while healthy and managed to cut his strikeout rate. But what happened to his speed, one of the few things that made him fantasy worthy? The Tigers are looking for a cheap option to replace Edgar Renteria, so Everett could be a good short-term fit there. The fact is, however, that I’m not sure Everett can hit enough to warrant a full-time job. Yes, he’s among the top defensive shortstops in the game, but his limited offense has been in decline since 2004. He sure as hell didn’t work out in Minny, but a team like Baltimore – which struggled all season long to find a shortstop who could stick – could be enticed to take a chance that Everett can bounce back – not that his offensive upside offers much room to bounce back to, mind you.

Eddie Guardado, LHP: Guardado looked reborn in Texas, but after a late-season deal, his homecoming in Minnesota was downright nightmarish. Still, he enjoyed a great season overall, really reducing his hit rates and settling in nicely as a solid set-up man. There are plenty of relievers with closing experience on the market, so Guardado will have competition to land a closing job and I really don’t see him getting another chance to save games at this stage of his career. But in the right situation, anything is possible. After he pitched so well for the Rangers last season, there’s a chance they’ll want him back. Tampa Bay may also be seeking an inexpensive late-inning man, especially if Troy Percival undergoes surgery and is not ready for the start of 2009. Colorado will be targeting a late-inning southpaw reliever to pitch in a set-up role, so you can be sure Everyday Eddie will be on its list.

Nick Punto, SS: Punto had a rough season, with two separate stints on the DL, but he when he played, he never played better, and because of his speed, he was a solid asset in AL-only leagues and deeper mixed leagues. With Chase Utley likely out to start 2009, the Phillies could look to plug the hole with an inexpensive, short-term option like Punto, who toiled in Philly from 2001 to 2003. However, note that Punto would revert to a utility role once Utley was declared fit enough to return from his hip surgery.

Dennys Reyes, LHP: Reyes turned things around after a rather pedestrian showing in 2007, becoming a very steady LOOGY last season. He set a new career high in appearances, showed strong hit rates, improved control and sharper command. In fact, despite his limited innings, Reyes pitched well enough to offer some value in AL-only leagues, a rarity for someone with his role. With so many teams seeking left-handed bullpen help, Reyes won’t have any problem finding a job. After losing Jeremy Affeldt to free agency, Cincy will be seeking a replacement, but you can expect the Reds to have plenty of competition in the bidding for Reyes’ services.

Next: Well, we had planned to tackle the Yankees in this part as well, but we wrote a bit long (how novel for us!), so next up, we’ll check out the Yankees’ free agent situation.