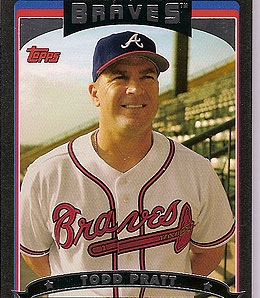 Todd Pratt, who reportedly juiced up in the early part of this decade, last appeared in The Show in 2006 as a Brave.

The report rages on! You can find previous parts here: Part I, II, III, IV, V, VI, VII and VIII.

Kirk Radomski said he first met Pratt after he joined the Mets in 1997. He says Pratt told him that he had previously acquired ‘roids from another source, and then, in 2000 or 2001, Radomski supplied Pratt with steroids once or twice. Like he did for all players mentioned in the report, George Mitchell gave Pratt the chance to set the record straight, but like most, Pratt declined. Pratt’s best season was in 2002 when, as a back-up catcher with the Phils, he hit .311 with an OPS of 949 in 39 games and 106 at bats. His final big league season was in 2006. Pratt tried to make the Yankees the following spring, but was released just before the season. In 14 seasons as a backup, he hit .251 with 49 homers.

Radomski reported that he first met Young in the Big Apple during the 2000-01 offseason, and that shortly after that meeting Young called him. Further, Radomski said he couldn’t remember who hooked Young and him up, but he says he was told to bring two HGH kits to that initial meeting. They had lunch and then Radomski sold him the kits in Young’s hotel room. Young called Radomski again in 2003 and bought another five or six kits at that time, according to Radomski. Young’s name and numbers were in the little black book the feds seized from Radomski. Given the chance to set the record straight for the report, Young declined. Young created excitement during his first call up to the bigs, going 4-for-7 with four RBI in 10 games for the Pirates in 1992. His best full season was in 1999, when he smacked 26 homers and drove in 106 runs while recording an OPS of 909 in 156 games and 584 at bats. His numbers dropped substantially over the next four years, and he was done after 2003. For his career, Young hit 144 homers in 1,205 games.

Lansing was introduced to Radomski by noted ‘roid pimp David Segui when those two were toiling for the Expos. According to Radomski, he had about four or five small transactions with Lansing involving testosterone and HGH. Copies of money orders from Lansing to Radomski are reproduced in the appendix of the report. When the feds searched Radomski’s home, they found an undated, partial shipping label with Lansing’s name and a Colorado address that has since been confirmed as where Lansing lived when he was with the Rox. Additionally, Lansing’s contact information was in Radomski’s address book. Lansing did not respond to requests to be interviewed for the report. His best season was 1997, his final year in Montreal, when he hit .281 with 20 homers and an OPS of 810 in 144 games. He played another few years, winding up briefly in the Indians’ Triple-A team in 2002, but never playing in the bigs after 2001. In nine big league seasons, Lansing played 1,110 games and had 4,150 at bats, smacking 84 homers, stealing 119 bases and hitting .271 with an OPS of 725 for his career.

McKay’s name and address were also found in Radomski’s little black book, but Radomski can’t recall for certain who referred McKay to him. However, he said he made two transactions with McKay, the second of which was in 2002. McKay declined to be interviewed for the report. This Canadian kid spent most of his career as a Triple-A catcher, but he made his MLB debut for the A’s in 2002, going 2-for-3 with two RBI in two games. He never hit a major league home run in 37 career games. He broke his arm early in the 2005 season while playing for Triple-A Memphis, and hasn’t played since.

Radomski said he sold journeyman pitcher Mercker one kit of HGH in October 2002. The cheque from Mercker to Radomski was reproduced in the report. Reproduced as well is a copy of an Express Mail receipt indicating a shipment to Mercker, who did not respond to Mitchell’s request for an interview. Mercker’s best season was 2003, when he recorded a 2.35 ERA in the Reds pen before a trade to Atlanta, and he was even better with the Braves, sporting a 1.06 ERA. Still kicking around the bigs with Cincy, he’s missed most of this season with a back injury, so could be done, but who knows? Mercker has overcome more serious issues in his lengthy big league career.

One cheque from Christiansen to Radomski is reproduced in the appendix. It’s dated July 2, 2002, and according to Radomski, it was for HGH and was the only transaction between him and Christiansen, who never responded to an interview request from Mitchell. Christiansen’s finest season was back in 1998 with the Pirates when he recorded 15 holds, six saves and a 2.51 ERA in 60 games and 64 2/3 IP. The Giants bought him out after the 2005 season, and he’s never pitched in the bigs since. In 11 seasons in the majors strictly as a reliever, Christiansen had a lifetime 4.29 ERA with 384 strikeouts in 434 innings. He saved 16 games in his career.

Former All-Star Stanton originally met Radomski around 2001, when Stanton was a Yankee. According to Radomski, he made two sales of HGH to Stanton, the first in 2003 when Stanton was with the Mets. Stanton declined the opportunity to talk to Mitchell about these allegations. His best season was probably his rookie year back in 1989 with the Braves when he recorded a 1.50 ERA with seven saves in 20 games and 24 IP. Stanton was released by the Reds this April, so appears to be done, but in 19 big league seasons, he pitched 1,114 innings (making just one start in his career), striking out 895 with 84 saves and 266 holds.

Next up, we’ll look at Stephen Randolph, Jerry Hairston, Jr., Adam Riggs and others.

By RotoRob
Tags: The Mitchell Report
This entry was posted on Sunday, September 28th, 2008 at 5:36 pm and is filed under BASEBALL, Performance enhancing drugs, RotoRob. You can follow any responses to this entry through the RSS 2.0 feed. Both comments and pings are currently closed.