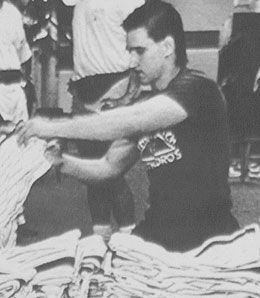 Before Kirk Radomski was pumped up by the steroid scandal, he was just another skinny, mullet-wearing clubhouse attendant.

Our comprehensive series recapping the Mitchell Report, nearly a year later, continues. You can find the previous portions of this series here: Part I, II, III, IV, V and VI.

Zaun is yet another player connected to the steroid scandal by Kirk Radomski. According to Radomski, it was Jason Grimsley – another figure made legendary by this report – who referred Zaun to him when both Grimsley and Zaun were teammates on the Royals in 2001. Radomski recalls that someone (whom he can’t remember) called him and placed an order for steroids on behalf of Zaun. While Zaun never spoke directly to Radomski, he did send him a cheque for Deca-Durabolin and Winstrol, and a copy of that cheque is reproduced in the report. Further, Radomski says he sent the drugs to Zaun at the Royals clubhouse. Luis Perez, the Expo bullpen catcher who was nabbed for possessing one pound of marijuana, in 2003 told investigators from the Commissioner’s Office that he had personally supplied steroids to Zaun and seven other players. Former KC manager Tony Muser said he once had a talk with Zaun about the dangers of steroids, but he never accused him of taking them, and Zaun denied ever using them. Further, Zaun declined to be interviewed by George Mitchell for the report. Zaun was a backup back in 2001, but he flashed more pop than ever back then, smacking six homers in just 39 games and 125 at bats. In 2006, he recorded an OPS of 825 in 99 games and 290 at bats for the Jays. He’s been slipping since, and looks near the end of the line now. Apparently, the Jays plan to decline his option for 2009, but he will likely wind up somewhere else as a backup.

According to Radomski, he was referred to Santangelo by David Segui – the king of ‘roid pimping – sometime between 1995 and 1997, when those two were teammates with the Expos. One cheque from Santangelo to Radomski from 2000 is reproduced in the report. Further, Radomski said he remembered selling Deca-Durabolin and testosterone to Santangelo once or twice in 2001. Santangelo declined the chance to respond to these allegations for the report. His best season was in 1999, when he hit .260 in 254 at bats for the Giants. He was a lifetime .245 hitter with 21 homers in 665 games and 1,691 at bats.

Piatt was quite helpful in supplying information for the Mitchell Report, as he was one of the few players implicated who actually agreed to be interviewed. In fact, Piatt, represented by his lawyer, was interviewed twice. Piatt was first hooked up with Radomski by Santangelo. Piatt, the A’s Minor League Player of the Year in 1999, had his lawyer contact Mitchell after Radomski pleaded guilty, and Piatt at that time admitted his use of PEDs, which he took during the 2002-03 offseason, acquired from Radomski. Further to his own admission, Piatt was instrumental in providing evidence that Miguel Tejada, his teammate in 2003, had purchased steroids. In fact, Piatt obtained them for Tejada, but he couldn’t say for sure whether Tejada ever actually used them. Copies of two cheques that Tejada gave to Piatt are reproduced in the report. Piatt’s best season was his rookie year in 2000, when he hit .299 with five homers in 60 games. He was in camp with the Indians, but retired prior to after the 2004 season, having produced an OPS of 745 and 16 homers in 521 games over four seasons played.

According to Radomski, he met Hill at a social function in 2000 at which Hill told him he had been taking HGH, but “not feeling anything.” Shortly thereafter, Radomski – ever the humanitarian – sent Hill a sample bottle of HGH free of charge and told him to give it a shot, so to speak. Hill was thrilled, and promptly bought two kits from Radomski, according to Radomski. One cheque from Hill to Radomski is reproduced in the report. Also, Hill’s name, address and phone number are listed in Radomski’s little black book, seized by federal authorities. Because Hill was employed by the Rockies as a coach in 2007, he had to cooperate for the report. His version of the events was a bit different than that of Radomski, however. Hill said he got Radomski’s contact info from someone he called “David,” a player he met in 1998 who admitted taking steroids and was very knowledgeable about their use (Segui, perhaps?). In late 2000, Hill said he contacted “David” and got Radomski’s contact info, and subsequently had about five telephone conversations with Radomski about the effects of steroids. Ultimately, Hill says Radomski sold him some Sustanton in either late 2000 or early 2001, but he said he never used the ‘roids he bought from Radomski. Hill was asked why he purchased them but never took them and he said at the time he was going through “marital stress,” whatever that means. Uh, my wife was nagging me, so it made me buy some ‘roids. Okay. Hill said he didn’t even know he still had them until he found them during a move in 2007. Further, he said this was the only time he ever bought PEDs and has never taken any. Hill also said he was advised by his lawyers not to name names as it would hurt his chances of advancing in his baseball career. Finally, according to Radomski, Hill referred Mo Vaughn to Radomski. Hill’s best season was probably in 1999, when he mashed 20 homers and hit .300 in just 99 games with the Cubs. Two years later, he was out of the bigs, having racked up a lifetime BA of .271 with 186 homers in 3,715 career at bats.

In Part VIII of the series, we’ll look at Denny Neagle, Ron Villone, Ryan Franklin and others.

By RotoRob
This entry was posted on Wednesday, September 24th, 2008 at 9:57 pm and is filed under BASEBALL, Performance enhancing drugs, RotoRob. You can follow any responses to this entry through the RSS 2.0 feed. You can skip to the end and leave a response. Pinging is currently not allowed.