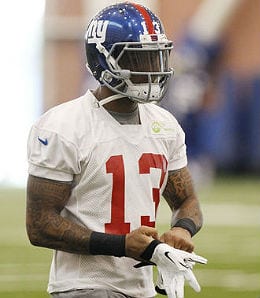 As most leagues are at or nearing their halfway point, there is less and less room for mistakes and these picks should help you avoid making one. Here are your Week Seven Start ‘em and Sit ‘em picks.

Odell Beckham Jr., WR, New York Giants @ DAL: Beckham was already a star on the rise (see his first TD in video below), but with the recent loss of primary wide out Victor Cruz he now has the opportunity to become Eli Manning’s go-to guy. We think Beckham will take advantage, so give him the start.

DeSean Jackson, WR, Washington Redskins vs. TEN: There may not be many top tier talent receivers that are more frustrating than Jackson in terms of Fantasy consistency, but as of late he seems to have finally developed a rhythm and we think you should ride it out.

Derek Carr, QB, Oakland Raiders @ ARI: After Oakland has started out 0-5, no one really expects much from the Raiders, but luckily for Carr owners, low expectations are a young quarterback’s best friend. The Cardinals are not as good against the pass as some might think, so Carr should be good for at least a QB2 performance.

Ryan Tannenhill, QB, Miami Dolphins @ CHI: Simply put, the Bears’ secondary is dinged up. While they held their own at Atlanta last weekend, they still have holes. Tannenhill is maturing into an efficient passer with many options in Mike Wallace, Brian Hartline and an emerging Jarvis Landry. We believe the Bears will lead early and ultimately win this game but all that means a heavy air attack from Tannenhill.

Drew Brees, QB, New Orleans Saints @ DET: Brees, on the road with no Jimmy Graham? No thanks! Not to mention the Lions’ defense is brutally tough right now.

Bishop Sankey, RB, Tennessee Titans @ WSH: It looks as if Sankey will enjoy another week as the feature back for the Titans. Unfortunately for him it will be against the increasingly stingy Washington defense. Most agree that Sankey will soon emerge as a premier back, but it won’t be in Week Seven.

Owen Daniels, TE, Baltimore Ravens vs. ATL: After the air assault that the Ravens dropped on the Tampa Bay Buccaneers last weekend, it would seem like Daniels would be a safe start, except he didn’t really participate with only three targets. Going against a Falcons’ d that’s great against tight ends, expect that trend to continue.

Andre Holmes, WR, Oakland Raiders vs. ARI: In Week Six, Holmes showed up big time with four catches for 121 yards and two TDs. That made him a hot waiver wire pickup, so he could make many debuts for owners this weekend. Might we ask why? The ‘Zona defensive backs are all hawks, led by a surging Rashad Johnson and the dominant  Patrick Peterson. Also, Holmes only had 11 receptions for 148 yards and one TD the entire season going into Week Six. The Cardinals did give up 350 yards to Kirk Cousins and company last weekend but a third of those yards came to the speedy DeSean Jackson and Holmes is no burner (4.53 40-time at the Combine).

Win, lose, or draw somehow someway the Dallas Cowboys will find a way to give up a huge stat line to someone on the opposing team and this week, we predict that person will be Jennings. He has been running great lately and, Fantasy-football wise, Dallas is the league’s worst at stopping the run. Josh Johnson should love this.

So, Ingram rattled off some impressive runs on Sunday night and he even found the end zone for the first time since Week 16 of last season. We also must remind you that the Saints were leading by three scores and Dallas was missing its top two middle linebackers. Ingram did see some touches early but his emotions were clearly distracting him, perhaps because this was only the fourth game he’s appeared in this season. The running back position is so desperately thin this season that many will bid high for Ingram. He does, after all, wear Russell Athletic (see video below).

The highlight of the week was definitely seeing the Cowboys choke away another December game. It brings me great pleasure that the Cowboys have not won a playoff game since Monica Lewinsky’s oral endeavours brought the nation to a standstill. As much as I think Tony Romo is a franchise type quarterback, he has still […]