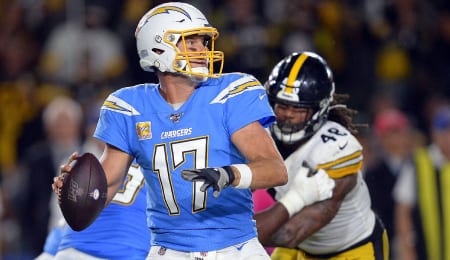 Philip Rivers gets to feast on a weak Raiders’ secondary on Thursday. (Gary A. Vasquez-USA Today Sports)

Clearly, the Chargers (4-5) are not dead yet this season, as evidenced by a convincing win over the Packers on Sunday. On Thursday, they try the winning going in Oakland in a huge AFC West rivalry match up against the Raiders (4-4), led by QB Derek Carr, who has been on fire the last three games.

Following their monumental upset over Green Bay, the Chargers travel to the Bay to face the Raiders. Baby-factory Philip Rivers has done admirably so far, sporting a line of 333-2,609-12 with seven interceptions despite his rubbish O-line. With OT Russell Okung back in the fray, L.A. stifled Chicago and the Packers (who sounded ready for Rivers, as you can see in the video below) to one combined sack despite leaking 1.6 sacks per game prior.

The skies will be friendly as the Raiders are coughing up 297.5 yards per game, a 114.8 passer rating and 8.4 yards per attempt. Even if Rivers doesn’t have a career day, his elevated floor renders him a high variance, low-end QB1 against this pass funnel defense.

Running backs Melvin Gordon and Austin Eckler are in an established committee. Since Gordon’s return, he’s averaged 20 touches in games against weaker, rush funnelling defenses but only averaged 11.5 touches against teams dedicated to stopping the run. Against the Raiders’ top-ranked run defense, expect Gordon to muster a meager 12-to-15 touches and no touchdowns as this week’s most likely bust.

Facing a defense leaky to passes to the backs, Eckler will outscore Gordon in this contest. With the Raiders giving up an average of 7.8 targets and 48.9 yards per game to backs, Eckler should feast on short dump-offs. He’s a high floor, low-end RB2.

Fantasy owners must be aware of Allen’s surprise hamstring complications that cropped up mid-week before the contest against the Bears. Regardless, he has premium matchups against CB Daryl Worley on the perimeter, and against untested SS Erik Harris in the slot. Worley is allowing 5.9 targets per game and a passer rating of 132.5. This is a get right spot for Allen. Owners should panic if he fails to deliver this week.

Williams has been a resident in Josh Hermseyer‘s Buy-Low model and has fallen short every week. Primed for another “breakout,” Williams will face off against perimeter CBs Trayvon Mullens and the aforementioned Worley. Following Gareon Conley‘s departure, Mullen was promoted and coughed up 14 targets and a passer rating of 131.5, so consider Williams a mixed bag WR2 in a great matchup.

Since his return, Henry has been the overall TE3 in Fantasy; first in air yards and fourth in targets. HH could sneakily end up as the TE1 as he faces a defense conceding the third most points to tight ends.

Quietly, the Raiders have built themselves into one of NFL’s most efficient offenses, according to DVOA. Completing 71.2 per cent of his passes, Derek Carr has produced a line of 250-1,984-13 with just four interceptions. San Diego’s overvalued passing defense is allowing 72.16 per cent completion, 7.4 yards per attempt, and a 100.7 pass rating to opposing quarterbacks. Despite the golden matchup, Head Coach Jon Gruden is more likely to lean heavier on the run game, so expect Carr to produce serviceable low-end QB1 numbers.

Questionable-scratch RB Josh Jacobs has cemented his bell-cow role, averaging 23.8 looks since Week Four. As the team’s engine, he’s racked up 92.5 rushing yards per game and six touchdowns while sprinkling in 2-to-3 catches per game. The Raiders’ elite rush O-line ranks fourth in adjusted line yards and records 71 per cent success on power runs. Against the Chargers’ middling run defense, Jacobs should have no problem matching his average of 4.9 yards per carry. Lock him in as a high-end RB2 with an astronomical ceiling.

Backup running backs DeAndre Washington and Jalen Richard average 5.47 and 4.27 Fantasy points per week, respectively. In the event Jacobs can’t suit up or aggravates his injury, Washington will take over as the rusher and Richard the third-down back in a 2:1 committee split.

Renfrow has emerged as a YAC monster following the Raiders bye and now faces slot CB Desmond King. Playing on 56.9 per cent snap count and allowing just 2.9 targets and 27.3 yards per game, but a 141.7 passer rating thanks to two touchdowns, King is an enigma. Expect Renfrow to be stifled anywhere on the field except for the red zone. He’s good for a WR3 flyer this week.

Working the perimeter, Williams faces a rotation of fading star CB Casey Hayward and untested sophomore CB Michael Davis. Dinged up in past weeks, Williams’ extraordinary 19.7 ADoT, but low volume creates an imminent blow-up opportunity. Lock him in as your WR2 but expect WR1 production. Waller has been nothing short of amazing. Second on the team in air yards but first in targets, he should have himself a nice day against a middle of the pack defense allowing 3.4 targets and 41.1 yards per game to opposing tight ends.

Oakland funkster The Perfect Circle were around from 1975 to 1979, but unfortunately only released one, self-titled album in 1977. From that effort comes “The Hands of Time.”

Now it’s your turn. Let us know in the comments below who you’re targeting in Thursday night’s matchup.

Unbeknownst to the Cleveland faithful, Carr is the leading rookie passer in almost every positive category. Obviously it’s too early to tell but he appears to be a steal as the fourth QB taken (second round) at least comparatively so. If you nabbed Carr this season, he was probably nothing but bye week material and his future ceiling is very weapons dependent. As for this season he was just a QB2 with upside. Solid performances versus San Diego and San Francisco were the highlights for the promising sliver and black signal caller. Even with a B-Squad of WRs, Carr managed 3,100 yards passing as well as 20 TDs to 14 total turnovers. Rookie numbers have and will be in the future much harsher.

Even if Bridgewater is able to play through his sprained ankle he will still be seeing his first action in a hostile environment, and on a short week. Therefore we prefer Bortles in Week Five at home against a suspect Steelers defense.