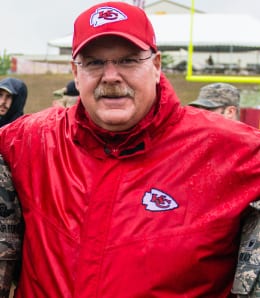 Miami will host the Super Bowl, featuring the Kansas City Chiefs and the San Francisco 49ers, two of the youngest and most polarizing teams in the history of football. Head Coach Andy Reid (who comes full circle with this battle against San Francisco, see video below) and the Chiefs proved capable of stopping heavy locomotive Derrick Henry, by smashing the Titans in the AFC championships.

Damien Williams slopped up 29-92-2 on his way to the Super Bowl and there’s very little hope against a stouter run defense. The saving grace is that 49ers have grown leaky to runs over 10 yards, allowing 104.7 yards per game and 4.4 yards per carry to opposing runners. Reid has always game planned well for RBs and it wouldn’t be a surprise if Williams manages to hit feast over famine simply because of the Mahomes’ effect.

In past years, premium defenses have stuck their CB1 on Kelce as a solution for the rest of the field. Loud mouth CB Richard Sherman will carry that distinction on Super Bowl Sunday. Kelce is 6’5″ and 260 pounds, and runs a 4.66s 40-yard dash. Sherman is 6’3″ and 195 pounds and runs a 4.6 40-yard dash. Size is at a premium for the Chiefs and it will show in the red zone. For the most part, expect Sherman to blanket Kelce save for a few dink and dunks.

Expect Head Coach Kyle Shanahan to deploy more Tampa 2 in order pressure the sidelines with his safeties and spy the middle of the field with his hot linebacker, likely Fred Warner. However, there is a chance Kwon Alexander can make it back for the Super Bowl.

Jimmy Garoppolo will need to throw more than 27 passes (his postseason total) on Sunday if he wants his third ring. Sacked three times on his way to the Super Bowl, the young QB needs to do a better job reading pressures if he wants to survive Reid’s onslaught. Throwing for 17-209-1 and one interception, Jimmy G is exactly what we think he is: a safer and stronger-armed Alex Smith. If there is one thing the KC pass defense excels at, it would be rushing the passer.

From the late-’70s through to the late-’80s, Azymuth had several releases on Milestone Records, the jazz label that also featured on its roster Sonny Rollins and McCoy Tyner. In 1980, Azymuth released Outubro; here’s the dreamy title track.

Now it’s your turn. Let us know in the comments how you think the Super Bowl will go, and which players will shine from a Fantasy standpoint.