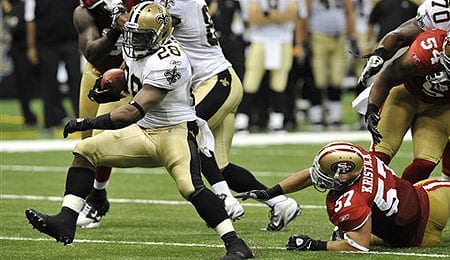 Each and every week of the NFL season some random players emerge from depth charts and make an impact. When this happens, fodder is produced for Fantasy owners to debate over. As such, we present to you The Wire Troll for Week 11.

Mark Ingram, New Orleans Saints: So, Ingram rattled off some impressive runs on Sunday night and he even found the end zone for the first time since Week 16 of last season. We also must remind you that the Saints were leading by three scores and Dallas was missing its top two middle linebackers. Ingram did see some touches early but his emotions were clearly distracting him, perhaps because this was only the fourth game he’s appeared in this season. The running back position is so desperately thin this season that many will bid high for Ingram. He does, after all, wear Russell Athletic (see video below). If you really think you need him don’t break the bank because Darren Sproles and Pierre Thomas are the two at the heads of the Saints stagecoach.

Dennis Johnson, Houston Texans: Johnson is a total scrap heap claim. Who is this guy? Well, he is a former Arkansas Razorback who gained just over 2,500 yards from scrimmage and scored 17 TDs on 408 touches in his college career. Johnson was an effective college player, averaging 5.9 yards per rush. Now he is now garnering suitors because former Fantasy stud Arian Foster has fallen victim to the injury bug again while Foster’s understudy, Ben Tate, is currently trying to play through four broken ribs. The Texans claim Tate is getting healthy, however, we can’t image what he feels like on Monday mornings. For now, Johnson is a hot name but at 2-7 the Texans might consider looking to next year and having Tate eat some ribs instead of nursing his own. Sure, Johnson only had four carries for seven yards In Week 10 at Arizona, but Houston faces the Raiders in Week 11, a slightly better matchup.

Rashard Mendenhall, Arizona Cardinals: Mendenhall is certainly another desperation add. It does appear Andre Ellington has been given a key yet neither he nor Mendenhall has the master. A time-share looms like an awkward lunge for a kiss on a first date.

Tyler Eifert, Cincinnati Bengals: With Jermaine Gresham being held out in Week 10, there was hope that Eifert might finally bloom. Eifert was targeted 10 times, but he only hauled down three receptions. Still, he gained 55 yards, so the Bengals obviously believe he is more than a dump off option. With guys like Kyle Rudolph and Jermichael Finley out, Eifert should be considered. If Gresham stays in street clothes, Eifert can start for you in Week 11.

Rob Housler, Arizona Cardinals: Housler finally found the end zone in Week 10. Here’s hoping his niche has finally been carved in the ‘Zona scheme. Housler has sneaky speed and a guy named Larry Fitzgerald opening things up for him, so he has the potential to be a very solid play down the stretch. It took Housler a while to get fully healthy but he’s good to go now.

Ryan Fitzpatrick, Tennessee Titans: We were very high on Jake Locker for the second half of the season, and while Fitzpatrick’s physical attributes may be very different from Locker’s, there is one thing they do share — a very favourable schedule. The Titans face the Colts (who just gave up 38 points to the Kellen Clemens-led Rams!) two of the next three weeks. Fitz also gets to play Oakland, Jacksonville again, and Denver (garbage time points!), with Arizona being the only questionable Fantasy matchup. If you’ve suffered with, say, Matt Ryan as your quarterback, do yourself a favour and pick up Harvard graduate Fitzgerald to be your new starter (especially if your league rewards IQ).

Scott Tolzien, Green Bay Packers: How lucky do you feel? The 26-year old Wisconsin product played reasonably well in his first NFL action Sunday, throwing for 280 yards and a score in relief of Seneca Wallace. It’s usually tough to recommend an unsung kid going into his second game, but you should take notice anytime there’s a new quarterback in an offense that allowed Matt Flynn to break records. Tolzien epitomizes a high risk-high reward pick.

Rishard Matthews, Miami Dolphins: In order to be successful as a deep threat guy like Mike Wallace, you need your quarterback to have enough time to allow big plays to develop. Unfortunately this has not been the case in Miami this year as Ryan Tannehill has been sacked a league high 37 times. This has definitely been a factor in Wallace only having two 100-yard games and one touchdown so far, hence his ongoing frustration as we discussed a couple of weeks ago. Wallace’s numbers could conceivably get worse now with the Dolphins down two starting linemen thanks to “Bullygate.” However, Wallace’s loss could end up being Matthews’ gain. Unless you live in Florida and actually watched Monday night’s game you may have never heard of this second year pro out of Nevada who’s taken over the slot receiver duties since Brandon Gibson’s year was cut short in late October. Matthews came into Week 10 with only 10 catches on the year, then exploded to the tune of 11 catches for 120 yards and two touchdowns. As per usual with young receivers coming off their first big game, we don’t recommend starting him quite yet. Matthews is definitely worth a roster spot though, especially since Tannehill could be forced into throwing mostly underneath passes the rest of the year.

Riley Cooper, Philadelphia Eagles: We’ve discussed Cooper before (just last week advising you to start him), but on many sites he is owned in only 30-to-50 per cent of leagues. This seems insane to us, as we now view Cooper as an every week starter as long as Nick Foles is under centre. Cooper may be low on your list of guys you want to have a beer with (perhaps tied with the drama queens on Miami’s O-line?), but the chemistry he’s established with is undeniable. In the last two weeks, Cooper has 241 yards and a crazy five touchdowns. If he’s out there then claim him and immediately start him versus the Redskins for Week 11.

Now it’s your turn. Let us know in the comments below who your favourite Fantasy football waiver wire claim of the week is.

By Josh Johnson
Tags: Dallas Cowboys
This entry was posted on Tuesday, November 12th, 2013 at 2:46 pm and is filed under FOOTBALL, Josh Johnson, Nick Wagner, The Wire Troll. You can follow any responses to this entry through the RSS 2.0 feed. Both comments and pings are currently closed.