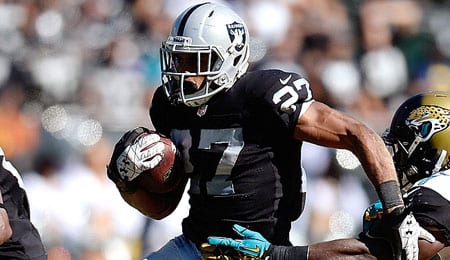 Rashad Jennings is poised to explode against the Cowboys. (M.si.com)

No more trades, no more byes, no more excuses. In most leagues you are either in the playoffs or this is your last chance to get in, so this is where we separate the men from the boys. This is by far one of our favourite times of year: food, football, and your Fantasy football hopes on the line. What more could you want? (Oh, and of course, there’s family too.) Here is your Week 13 Start ’em or Sit ’em recommendations.

Rashad Jennings, RB, Oakland Raiders @ DAL: Win, lose, or draw somehow someway the Dallas Cowboys will find a way to give up a huge stat line to someone on the opposing team and this week, we predict that person will be Jennings. He has been running great lately and, Fantasy-football wise, Dallas is the league’s worst at stopping the run. Josh Johnson should love this.

Andre Brown, RB, New York Giants @ WAS: Hmmm, how can we put this… well, let’s just say the Washington Redskins are our new Atlanta Falcons and that’s not a good thing. Definitely go with Mr. Brown, who has had to overcome so much (see video below) before arriving at what he calls “my time.”

Michael Floyd, WR, Arizona Cardinals @ PHI: Aside from the fact that the Philadelphia Eagles are dead last in Fantasy football against the pass, there also has been an awakening with the Cardinals true star receiver Larry Fitzgerald, which should free up Floyd to get a healthy dose of one-on-one match-ups.

Jordy Nelson, WR, Green Bay Packers @ DET: The Detroit Lions are almost as bad as the Philadelphia Eagles as far as the pass is concerned. When you couple that with the fact that newly acquired back up Matt Flynn has had even more time to sync up with a receiving corps that he’s already familiar with, that spells trouble for the Lions’ secondary.

New York Giants Defense @ WAS: Let’s see here, no teamwork, lack of production, and a deep affection for sound bites… we swear they remind us of something else in Washington. Go with the Giants’ D, because we would bet against the Redskins water boy at this point.

T.Y. Hilton, WR, Indianapolis Colts vs. TEN: The season of the sophomore slump is upon us and Andrew Luck is right smack in the middle of it — not to mention the Tennessee Titans have put the clamps on most of the receivers they’ve faced this year. We’re putting Hilton on hiatus for this one.

Jets Receivers vs. MIA: Wow, the Miami Dolphins are good at defending receivers… wow, Geno Smith has been bad at throwing to them. That was easy.

Tony Gonzalez, TE, Atlanta Falcons @ BUF: Poor Gonzalez has been a class act his whole career and didn’t deserve to come back to a team like this, but for him it won’t get any better this week when the Atlanta Falcons travel to the Buffalo Bills’ home away from home and the stomping grounds of the world’s kookiest mayor (look him up) — Toronto.

Lamar Miller, RB, Miami Dolphins @ NYJ: They may be saddled with a crappy QB as we discussed above, but the Jets defense is the real deal and, boy, do they take stopping the run seriously. The only problem is we don’t think the Dolphins take their commitment to running the ball nearly as seriously. So find a place for Miller on your bench.

Green Bay Defense @ DET: The Packers haven’t been great on defense for some time, and at home when the lights are on you can almost always depend on Calvin Johnson, AKA Megatron (said in our Transformers’ voice), to put up video game numbers and who’s going to stop him? …Don’t worry, I’ll wait.

Now it’s your turn. Let us know in the comments below who your favourite sit and start of the week is.

By Vaney Hariri
Tags: Dallas Cowboys, Oakland Raiders, Rashad Jennings
This entry was posted on Wednesday, November 27th, 2013 at 4:45 pm and is filed under FOOTBALL, Start 'em Sit 'em, Vaney Hariri. You can follow any responses to this entry through the RSS 2.0 feed. Both comments and pings are currently closed.