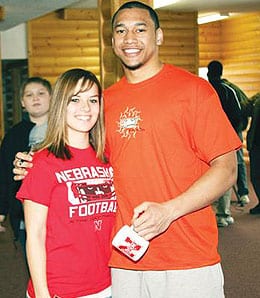 Let’s hope Roy Helu doesn’t let the hotties — or his Fantasy owners — down in Week 10.

Welcome to the Week 10 edition of the Wire Troll. It’s another short one this week, as the Troll has just returned from First Pitch Arizona. I saw some good baseball out there, and got a very early look at how the Fantasy baseball landscape may take shape in 2012. Fear not, there’s a report coming soon.

Reminder: There is a Thursday night game — Oakland at San Diego — so get your lineups in on time.

There’s nothing outstanding this week and the Troll is still stinging from the beat down Matt Cassel laid on me last week. Thanks to all of you who took the time to remind me how far wrong I was on that one (and a few others); the suggestion that RotoRob hire an Alabama placekicker to sub for me this week was hurtful and wrong, though. Count me out for this month’s pancake social.

Roy Helu, Washington Redskins: The rookie grabbed an unbelievable 14 receptions Sunday, while rushing for 41 yards. He has climbed atop the lead horse in the Washing backfield carousel, but be forewarned that newly acquired Tashard Choice is lurking in the background. We don’t need to remind you how fickle head coach Mike Shanahan can be with his running backs, but for now, Helu looks like the guy.

Reggie Bush, Miami Dolphins: Bush posted his second straight strong effort in Week Nine, piling up 142 yards from scrimmage and scoring his first rushing touchdown of the season. Bush cannot hold up to the pounding associated with being a feature back, but it looks as though the Dolphins have figured out how to deploy him on the edges and as a receiver out of the backfield. Grab Bush; wait… make that acquire Bush, immediately in all PPR formats, and he’s worth adding in deeper standard leagues as well.

Laurent Robinson, Dallas Cowboys: With top wideout Miles Austin sidelined by yet another hamstring injury, Robinson will once again draw the starting nod in Week 10. He has posted a 10-135-2 line over his past two games, and has become an integral part of the Cowboys’ aerial attack. Grab Robinson in all formats; he’s a viable WR3 while Austin is on the shelf.

Earl Bennett, Chicago Bears: Bennett returned to action in Week Nine after missing five games with a chest injury, and racked up 95 receiving yards and a touchdown against the Eagles. Bennett was a college teammate of quarterback Jay Cutler, so the two have a natural rapport. Devin Hester is questionable with an ankle injury for Week 10, and Roy Williams is still Roy Williams, so the opportunity is there for Bennett to take a lead role in the receiving game. Add the wideout in deeper leagues, but be prepared to cut bait if Cutler turns his attention elsewhere.

Dan Carpenter, Miami Dolphins: The ‘Fins offense is lethargic at best, but Carpenter has still managed to knock home seven field goals in his last four outings. In Week 10, Miami plays host to the Redskins, who have surrendered the most points to opposing kickers this year. Don’t count on Carpenter to be a season-long option, but he’s definitely worth rolling out there against the ‘Skins.

Cleveland Browns: The Rams are second-to-last in scoring offense, and quarterback Sam Bradford is still less than 100 per cent. Cleveland, meanwhile, is a very respectable sixth in total defense and No. 1 against the pass. Not only are the Browns a fine play in Week 10, they are worth adding outright in many Fantasy formats.

Karlos Dansby, LB, Miami Dolphins: Dansby was once an IDP stud, but he has suffered through a couple of sub par seasons and was no more than an afterthought in most Fantasy drafts this year. Think again, though, as the veteran has piled up 30 total tackles over his last three games… and has once again become a viable IDP option in deeper Fantasy leagues.

Jordan Babineaux, S, Tennessee Titans: Babineaux has 40 total tackles over the past four games, and he should continue to produce big numbers in that category given the ineptitude of the Tennessee offense. He has yet to produce a sack, but his lone interception was a 97-yard pick six. Add Babineaux if you’re hurting for secondary depth, but don’t look for him to be a game changer in the turnovers department.

After being hampered by a toe injury throughout much of 2008, Gates rebounded last year to post a career-high 1,157 receiving yards. He also added eight touchdowns, marking the sixth straight season he’s tallied at least that many.