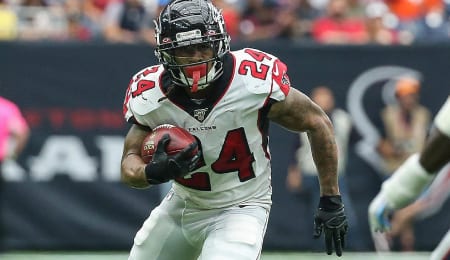 Could Devonta Freeman wind up in Philly? (AP Photo/John Bazemore)

With the world of sports still generally stalled by the pandemic, the 2020 NFL season inches closer — especially now that the draft is complete.

Before long, football fanatics should be able to wager on their favourite teams, and for those of you that are already feeling the wagering itch, here’s a look at the first week of NFL odds.

Quarterback Cam Newton is perhaps the biggest name out there. After all, we are talking about a former NFL MVP here, one that had the Panthers very much in contention not long ago. However, last year was a real writeoff for Newton as a foot woe limited him to two games.

Carolina tried to deal him, but couldn’t find any takers so released him in March. Newton is apparently healthy now, and has been posting workout videos to prove this much to the rest of the league.

Given the perception that he’s clearly in decline now, the likely best case scenario at this time is a backup gig, but depending on where he lands, he could have a shot to start again in time. The Patriots have long been rumoured as a team that could sign Newton, and Washington also seems like it would be a good landing spot given that Redskins Head Coach Ron Rivera used to be a Panthers’ coach.

At this point, Newton is not even a top 35 option at quarterback.

Running back Devonta Freeman is another free agent that’s been burned by injuries in recent years after looking like a dominant player in the middle of last decade. After Atlanta cut him loose in March, it was reported he wanted some serious bucks and was willing to sit out the season or even call it quits if no one ponied up the cash.

Now that Carlos Hyde has signed in Seattle (after Freeman rejected the Seahawks’ offer), interest in Freeman may heat up, and reportedly Philadelphia is looking at him and LeSean McCoy. Two-time Pro Bowler Freeman may wind up having to take what he can get, retirement rumours notwithstanding.

The Falcons gave him a massive contract after the 2016 Super Bowl appearance, and it’s kind of been downhill since (but that hasn’t stopped the fan base from recognizing how great he once was — see video below). Freeman missed two games in 2017 and was limited to 865 yards rushing. The following season he managed to suit up in just two games, and last year, he again missed two games, putting up just 656 yards on a career-worst 3.6 YPC.

If Freeman doesn’t land in Philly, perhaps he’ll wind up in New York, where the Jets are reportedly also interested. Even so, at this stage, he’s barely a top 75 running back for Fantasy purposes.

Finally, quarterback Blake Bortles is still looking for work, too. The third overall pick in the 2014 draft, he looked like a franchise QB in the making for Jacksonville after throwing 35 touchdown passes in 2015, but he hasn’t approached that level since and last year wound up as a backup for the Rams.

The Jaguars have been playing musical chairs at quarterback since, but Bortles is no one’s idea as a starting option anymore. His best chance for Fantasy value could come if a team loses its starting QB to injury in training camp and he’s brought in to be a stopgap solution. Bortles was never a Fantasy darling, but it’s hard to overlook the fact he finished fourth in QB Fantasy points in 2015 and ninth the following year. So completely ignoring him isn’t advisable.

British singer Cat Stevens (now known as Yusuf Islam) got his start in 1965, performing until 1980. After a 15-year gap, he returned under his new moniker and has been at it since. In 1970, he released his fourth album, Tea For the Tillerman, which was his height of brilliance. From this album comes “Where Do the Children Play,” one of Stevens’ best known pieces.

Now it’s your turn. Let us know in the comments below where you think these players will land and what kind of Fantasy value they will offer in 2020.

By Oscar Hall
Tags: NFL
Posted in FOOTBALL | Comments Off on Biggest Winners and Losers in the NFL International Series

How about his career game Sunday with four touchdown passes and 311 yards passing? A couple of long TD passes helped really jack up his YPA. Since getting picked twice by Seattle in Week Five, Goff has looked better and better each game. The 2016 first overall pick has now topped 2,000 yards passing — halfway through his second season. He looked lost last year, but now, his arrival as a legitimate quarterback has coincided with the Rams’ coming of age. No wonder so many NFL teams are beating the bushes for a franchise QB. This is Exhibit A on the rewards of finding one.