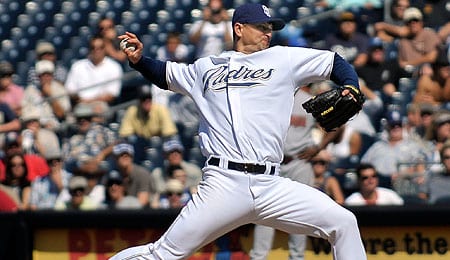 So what if Trevor Hoffman looked like a pinata at the All-Star Game?

Are you a Trevor Hoffman owner worried about his All-Star game meltdown? Well, don’t sweat it. Contrary to Fox’s omnipresent blathering that “this one counts,” the fact is that the blown save and loss don’t count for squat. Hoffman is enjoying perhaps the finest season of his long and distinguished career and will probably add the all-time saves record to his wonderful 2006 showing. Currently ranked second in the league in saves, Hoffman is headed for his highest total since 1998 and his already fine control is even sharper this season.

Hell, he’s even healthier than he’s been in some time, as evidenced by the fact he’s headed for his most work since 2000. Enjoy the ride, and expect — if possible — even greater success in the second half. Over the past three years, Hoffman’s ERA is three-quarters of a run lower after the break. Now, that counts.

By RotoRob
Tags: MLB All-Star Game, Trevor Hoffman
This entry was posted on Thursday, July 13th, 2006 at 1:12 am and is filed under BASEBALL, Fantasy Notes, RotoRob. You can follow any responses to this entry through the RSS 2.0 feed. Both comments and pings are currently closed.