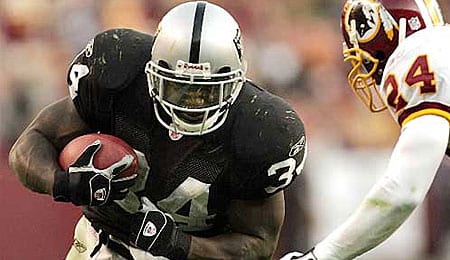 Buck is back, with the final portion of our look at 2009 NFL free agency signing period. Previous reports:

The Skinny – You might have caught an occasional news blip, oh, roughly every 30 seconds or so, about the supposed friction between Bronco head coach Josh McDaniels and starting quarterback Cutler. That rift became about 1,050 miles wide after Cutler was dealt to Chicago – with former Bear signal-caller Orton landing in Denver. You might remember Orton and his neck-beard from his various Internet photo appearances in both on and off the field genre – nudge, nudge, wink, wink.

Orton’s thankfully lost the neckie, and he’s not as bad as you might think: Three so-so December games at frigid Soldier Field dragged his 2008 numbers southward. That being said, Denver isn’t known for balmy winter weather, and Orton doesn’t figure to be anything more than a decent NFL quarterback and occasional Fantasy starter; the skills (football skills, anyway) just aren’t there.

Dawkins should help shore up what was an awful Denver D last season, but whatever sleeper potential Jordan and Buckhalter might have had went out the window when the Broncs tabbed Georgia running back Knowshon Moreno as their first-round draft pick. Moreno is a great fit for the Denver offense, and could have a monster season if his body holds up to the pounding.

The Skinny – The Chiefs are hoping that Cassel’s big year in ‘08 wasn’t just a product of the system in New England, but they didn’t do him any favours by trading Gonzalez to Atlanta for a mere 2010 second round draft pick. Gonzo snagged 96 catches for 1,058 yards and 10 TDs a year ago, and his hands and athleticism will be sorely missed.

If he can stay healthy, Engram could occasionally contribute some meaningful numbers working underneath the coverage, but his fantasy value will be limited by his advancing years and the presence of big Dwayne Bowe on the opposite side. The same age caveats apply to Thomas, whose glory days in Miami are nothing more than distant memories. Don’t draft Vrabel for your IDP league based on his strong years in Foxboro, but his playmaking ability might win him some favour as a spot starter in deeper formats.

The Skinny – The second-most famous Garcia to ply his trade in the Bay Area returns to town, but he’ll likely only be an insurance policy in case JaMarcus Russell stumbles. Now, when Russell does stumble, Garcia should give the Silver and Black some serviceable play whilst dinking the ball underneath and trying the patience of Al Davis, who never met a 60-yard bomb he didn’t love.

Those bombs will likely be pointed in the direction of Raiders’ shocking no. 1 draft pick, mercurial wideout Darrius Heyward-Bey. DHB is big and fast, and if Russell keeps his game together, the combination could be lethal for years to come. We’re not sold on Russell just yet, but both he and Heyward-Bey are great speculative Fantasy picks – so long as you don’t bet too heavily on either one.

The running game figures to be improved by the bruising presence of fullback Neal, who is one of the game’s premier blocking backs. While his Fantasy worth is nil (except in formats that reward pancake blocks), Neal should boost the value of whomever lines up at tailback for the Raiders this season.

The Skinny – The Bolts pretty much played a pat hand in the offseason, though the departure of Goff leaves a sizable hole on the right side of the O-line. The signing of running back Darren Sproles to a hefty franchise tender should signal that the Chargers are not completely sold on the potential longevity of starting tailback LaDainian Tomlinson, who has battled injuries each of the past two seasons and is about to hit the big three-oh. All those touches begin to wear an NFL back’s body down, and LT is showing signs of hitting the wall. Needless to say, (but we’ll say it anyway) Sproles is a must-grab if you draft LT in your Fantasy league this season.

The Chargers defense garnered only 28 sacks last season – largely due to the absence of rush monster linebacker Shawne Merriman (knee) – and they addressed that need by nabbing ‘tweener linebacker and D-end Larry English with their first-round draft pick. The 6-foot-2, 274-pounder racked up 31.5 sacks and 63 tackles for loss during his career at Northern Illinois, but there are some questions as to his pass coverage skills. Merriman looks to be ready to come back, but in case he can’t, English may be asked to shoulder a big load early on.

By Buck Davidson
Tags: AFC, Denver Broncos, Oakland Raiders, San Diego Chargers, West
This entry was posted on Sunday, May 10th, 2009 at 6:02 pm and is filed under Buck Davidson, FOOTBALL, Free agents. You can follow any responses to this entry through the RSS 2.0 feed. You can skip to the end and leave a response. Pinging is currently not allowed.