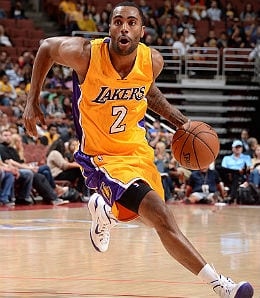 Wayne Ellington is thriving in a starting role for the Lake Show. (Blacksportsonline.com)

Kobe Bryant (shoulder) has been ruled out for the season; Damian Lillard was left out of the All-Star selections; and DeMarcus Cousins did not get arrested for five years. The Kings, who got off to an 11-13 start, have now lost 16 of 21 since Ty Corbin was named interim coach. The Hawks’ streak is at 18 and they now have the best record in the NBA as the Bulls ended the Warriors’ 19-game home winning streak.

Wayne Ellington, SG, Los Angeles Lakers (ESPN: 15.2 per cent; CBS: 40 per cent): As mentioned above, Bryant is done this season and Ellington has moved into a starting role and has turned into a decent scorer. Ellington is averaging 14 points over his last seven games, including a whopping 51 points over the last two. Assuming he holds on to the starting job, he could be a nice under the radar pickup for the stretch run, and he’s shown he’s not just a deep threat — driving to the hoop with some success (see video below).

Brian Roberts, PG, Charlotte Hornets (ESPN: 7.8 per cent; CBS: 42 per cent): Back for a second time in The Wire Troll this season, Roberts is here for a different reason this time. Kemba Walker will be out close to six weeks in the wake of knee surgery, so Roberts has picked up a starting role. Roberts is off to a good start with that role, so it would be worth it to keep an eye on him for the short term.

Joe Ingles, SF/PF/SG, Utah Jazz (ESPN: 2.8 per cent; CBS: 13 per cent): Remember how the Jazz had a super hyped mystery rookie from Australia, however he wasn’t the right age? Well this isn’t Dante Exum, this is 27-year-old freshman Ingles who is now starting for Utah. Ingles is a dude that quietly fills up the stat sheet and is earning more minutes because of it. For example he had a game recently in which he appeared to do nothing and when you looked at the final stats he had eight points, nine rebounds and seven assists. Ingles is not a must-own yet, but as he gets more and more comfortable in the NBA he could be worth something in all formats.

Brandon Bass, PF, Boston Celtics (ESPN: 5.7 per cent; CBS: 45 per cent): Bass has taken over for Kelly Olynyk, who will we be sidelined by an ankle injury for roughly four weeks. Bass, who has started the past six games, has really stepped up in that role, averaging 12 points and eight rebounds in that stretch and emerging as a real double-double threat.

Kris Humphries, Milwaukee Bucks (ESPN: 12.5 per cent; CBS: 47 per cent): Humphries is on fire right now with 40 points and 40 rebounds in his last three games combined. The downside is he isn’t offering any help in steals, assists or blocks, so we’re talking about a two-category player (outside of percentage leagues).

Henry Sims, Philadelphia 76ers (ESPN: 3.2 per cent; CBS: 17 per cent): We recommended Sims early on this season, but his PT has waned since November as he failed to deliver on his chances. Still, when you look at some of the numbers he’s put up in limited minutes, it’s hard not to get excited about the possibilities. Sims got a start earlier this week (scoring 14 points in 19 minutes), but is back to coming off the pine the last two games. However, despite playing less than 20 minutes in each of the last five games, he’s reached double digit points three times. Should an injury in the 76ers frontcourt open up more PT for Sims, get ready to pounce. As things stand, we think he can help you now in leagues with 14 teams or more.

By McCade Pearson
Tags: Damian Lillard, DeMarcus Cousins, Kobe Bryant, NBA All-Star Game, Sacramento Kings, Ty Corbin
This entry was posted on Saturday, January 31st, 2015 at 2:50 pm and is filed under BASKETBALL, McCade Pearson, The Wire Troll. You can follow any responses to this entry through the RSS 2.0 feed. Both comments and pings are currently closed.