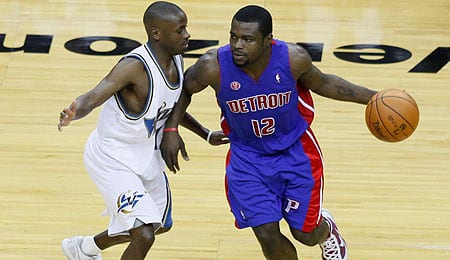 Will Bynum has taken over as the Sixth Man in Motown.

As we experience the NBA dog days of March with multiple teams out of playoff contention and vying for draft lottery position, it’s important to keep a close eye on playing rotations. This is a time when players can emerge as coaches and general managers evaluate their talent in preparation for the the upcoming draft and the 2014-15 NBA season. You will find a few such players in our Wire Troll recommendations below:

Marcus Thornton, SG, Brooklyn Nets: Thornton was acquired at the trade deadline from Sacramento for Jason Terry and Reggie Evans. In need of a true scorer off the bench, the Nets have seen Thornton record games of 25 and 20 points, respectively over the past week. He is very adept at shooting the three-ball and going to the foul line with success. If your Fantasy team needs offensive firepower for the stretch drive, don’t hesitate to add Thornton.

Xavier Henry, SG, Los Angeles Lakers: Henry recently returned after missing several weeks with a knee ailment. He is just beginning to round into form as evidenced by his solid game (31 minutes of playing time) on Friday versus Denver. We expect Henry to see consistent playing time given that the Lakers are in total disarray right now.

Will Bynum, PG, Detroit Pistons: Interim coach John Loyer is fond of Bynum and has anointed him the Pistons “sixth man” as of late. Over his last seven outings, Bynum is averaging 13 points and five assists and is certainly worthy for those in need of point guard help. He still has some mad skills as evidenced by the video below.

Ramon Sessions, PG, Milwaukee Bucks: Another player very similar to Bynum is Sessions. Coming to Milwaukee from Charlotte at the trade deadline has allowed Sessions to experience solid bench minutes behind both Brandon Knight and Nate Wolters. Sessions will give your team scoring, assists and a nice boost from the free throw line.

Caron Butler, SF, Oklahoma City Thunder: After having his contract bought out by the Bucks, Butler chose to join Kevin Durant and company in hopes of winning an NBA championship. With starting shooting guard Thabo Sefolosha (calf) sidelined four-to-six weeks, the Thunder can certainly benefit from the talents of Butler. Expect him to be the starter at shooting guard and play plenty of minutes through the stretch drive.

Maurice Harkless, SF, Orlando Magic: With the release of Glen Davis (now with the Los Angeles Clippers) and minor injuries to Jameer Nelson and Victor Oladipo, Harkless is being provided the opportunity to develop. The Magic has always been high on this second year player and the results have been promising of late. During his last five contests, Harkless is averaging 14.8 points, two steals, two three-balls and over one block.

James Anderson, SF/SG, Philadelphia 76ers: Anderson is not known for his offensive consistency, but when he’s on, watch out. The Thunder saw Anderson register 20 points on six three pointers earlier this week. With the 76ers officially in tanking mode, Anderson will see plenty of court time and shots moving forward.

Corey Brewer, SF/SG, Minnesota Timberwolves: From a Fantasy standpoint, there is nothing overwhelming about Brewer. However, he’s the type of player that scores while contributing threes and steals. Brewer is a quality depth player for your Fantasy bench.

Kyle O’Quinn, C/PF, Orlando Magic: Like the aforementioned Harkless, O’Quinn is another Magic player being afforded additional opportunity. Recently O’Quinn has looked very good as the main backup for both centre Nikola Vucevic and power forward Tobias Harris. If your team needs assistance with some scoring, rebounding and blocks from the centre position, O’Quinn is your man.

Pero Antic, C/PF, Atlanta Hawks: Antic was sidelined several weeks with an ankle malady but has recently rejoined the Hawks lineup. With Elton Brand being asked to play too many minutes for his aging body, Antic will assume a key role. Prior to the injury, Antic was a productive big man and he can even shoot the three-ball.

Amar’e Stoudemire, C/PF, New York Knicks: Recently promoted to the Knicks starting lineup, Stoudemire has registered games of 22 and 18 points with ample rebounds and blocks. There’s no guarantee that his balky knees will hold up, but feel free to take the chance while the going is good.

By Bob Raymond
Tags: Brooklyn Nets, Marcus Thornton, Sacramento Kings
This entry was posted on Saturday, March 8th, 2014 at 3:18 pm and is filed under BASKETBALL, Bob Raymond, The Wire Troll. You can follow any responses to this entry through the RSS 2.0 feed. You can skip to the end and leave a response. Pinging is currently not allowed.