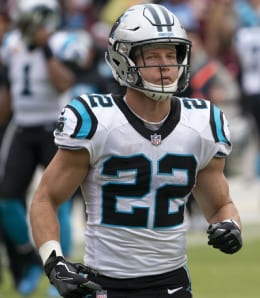 Christian McCaffrey will be hard-pressed to repeat his 2019 success. (Keith Allison)

Welcome back to 2020 RotoRob NFL Draft Kit. With our cheat sheets done, we’re shifting to busts, perhaps the only list JaMarcus Russell isn’t too heavy for. For now, we’ll leave him and Kelvin Benjamin at the buffet table as we present 2020’s Top 10 Fantasy busts.

Believe it or not, the most frequent and league changing busts occur in the first round. We suggest drafting with the mentality of “not losing” rather than winning. Particularly in season-long leagues, taking a consistent week-to-week player provides better expected value than someone who scores the same amount of points in peak-and-valley style. Below are some players we believe you should avoid drafting at their current ADP. The players are listed in order of their current ADP.

1. Christian McCaffrey, RB, Carolina Panthers (ADP: 1, RB1): The back-to-back 1,000-yard/100-reception seasons netted McCaffrey a four-year/$64-million contract with $30 million guaranteed upon signing, locking him in with the Panthers until 2022. Viewed as an inauspicious move following the recent batch of mega-deal busts at the position, CMC’s contract marked the largest for a running back ever. Worse yet, Carolina will incur a dead money hit of $41 million (23.5 per cent of 2020’s cap allocation), doling out annuities to departed players. The big-brained front office decided — during a rebuild — to offer man-of-glass Teddy Bridgewater a three-year contract worth $63 million, and then proceeded to offer fellow-man-of-glass Robbie Anderson a two-year, $20 million contract while Curtis Samuel and D.J. Moore are still on their rookie contracts. CMC simply won’t repeat his performance, and whether it’s because of injury, lack of talent or personnel change is anyone’s guess. Still, before you start feeling sorry for him, just remember he’s banging this…

2. Alvin Kamara, RB, New Orleans Saints (ADP: 5, RB4): The PPR-friendly back will enter his fourth year in the league after missing weeks seven and eight in 2019. Kamara racked up 304 yards on 86 carries as well as 276 yards on 33 receptions (39 targets), averaging 3.5 yards per carry and 7 yards per target before his midseason absence. After returning, he produced 424 yards on 85 carries (4.9 YPC) and 257 yards on 48 receptions (58 targets) for 257 yards (4.4 YPT), averaging four fewer carries per game in an effort to trade opportunities for efficiency. Bleaker yet, passes thrown to him averaged a depth of target (ADoT) of 0.3 yards, 1.5 yards lower than 2018, again in an effort to create efficiency. Kamara averaged 6.9 yards after catch (YAC) in 2019, a whole yard lower than 2018. These trends are a concern, as is his durability.

3. Chris Godwin, WR, Tampa Bay Buccaneers (ADP: 15, WR6): Godwin finished as Fantasy’s second-ranked wide receiver in PPR leagues after recording a line of 86 receptions on 121 targets for 1,333 yards and nine touchdowns. Despite the positive narrative of Tom Brady and his slot receivers, we believe this success was a product of HC Bill Belichek‘s inside-first-outside-last offensive philosophy. Tampa Bay HC Bruce Arians strongly signaled an increase of 22 formation, designating Godwin as the left wide receiver. Furthermore, regression is likely to hit as Godwin had a 71 per cent catch rate and 4.77 YAC per reception on an ADoT of 10.8 yards — 43 per cent of every yard gained is attributed to YAC, a non-predictive metric compared to air yards.

5. Leonard Fournette, RB, Jacksonville Jaguars (ADP: 34, RB15): Fournette put in a serviceable Fantasy season last year, buoyed by 79 receptions (on 100 targets) for 522 yards. On the ground, he rushed for 1,152 yards on 365 carries with three touchdowns. Of Fournette’s 259.4 Fantasy points, 50 per cent of his value was derived from short passes with an ADoT of 0.2 while commanding a target share of 18 per cent. The acquisition of Chris Thompson hurts Fournette’s value tremendously. Known as a pass-catching prototype on third downs in Washington, Thompson is reunited with OC Jay Gruden in Jacksonville. Expect Fournette to finish 2020 with half the targets he saw in 2019.

6. Le’veon Bell, RB, New York Jets (ADP: 43, RB19): HC Adam Gase has managed to sink a lot of careers, probably none more so than Bell and Sam Darnold. After publicly announcing his dismay at the signing, Gase refused to tailor the offense to fit either Bell or Darnold and proceeded to deploy his star running back in the most brainless fashion possible. Bell finished as 16th in Fantasy points with 789 yards and three touchdowns on 245 carries and 66 receptions (on 78 targets) for 461 yards and one touchdown despite having signed a four-year, $52.5 million contract, the largest for a RB at the time. The team will incur a league-high cap hit of $15.5 million (7.4 per cent of total cap) in 2020 for Bell. In true Jets fashion, the team then caved to Gase and signed Frank Gore to a one-year, $1 million contract, further eating into Bell’s value. Last season under Gase in Miami, Gore finished with 722 yards on 156 carries with 12 receptions (on 16 targets) for 124 yards and a touchdown.

7. A.J. Green, WR, Cincinnati Bengals (ADP: 54, WR29): After missing 2019 during HC Zac Taylor‘s first year and the installment of a new quarterback set, Green is back. Especially in a Covid-stricken year, Green is unlikely to get as many reps from Joe Burrows as he would like. Furthermore, Green’s 2017 “down year” spelled the beginning of the end. His 52.4 per cent catch rate, 7.5 yards per receptions and 67.4 yards per game were all career lows. In 2018, Green averaged 15.1 yards per reception (tied for the second highest in his career) and 59.7 per cent catch rate before undergoing a season-ending surgery for torn ligaments in his knee. He missed the entirety of the 2019 season because of ankle surgery. Even though the Bengals did franchise Green, drafting Tyler Boyd at a similar ADP reduces risk dramatically.

8. Cam Akers, RB, Los Angeles Rams (ADP: 75, RB29): During Todd Gurley‘s dynamic 2018 regular season, Los Angeles’ offensive line ranked first in adjusted line yards and subsequently first in running back yards, all while getting stuffed just 14.6 per cent of the time (second lowest in the league). Of the historic OL in 2018, only three remain: LT Andrew Whitworth, RG Austin Blythe and RT Rob Havenstein. The departure of LG Rodger Saffold and C John Sullivan was detrimental as last year the OL finished 19th in adjusted line yards, and 18th in running back yards despite being first in pass protection, according to adjusted sack rate. Nevertheless, Akers is likely to become the lead back, despite a probable timeshare with Darrel Henderson and Malcolm Brown. And the truth is, Akers’ college reels weren’t great.

9. Will Fuller, WR, Houston Texans (ADP: 82, WR36): If someone were to create the most one-dimensional receiver, it would be Fuller. With hands of stone and a body made from glass, his redeeming attribute is his blazing speed (4.23s 40 yard dash). HC Bill O’Brien, bless his heart, tried early in the season to feature Fuller over DeAndre Hopkins. In the first five weeks of 2019, Fuller notched 400 yards on 24 per cent target share versus Hopkins’ 347 yards on 28 per cent target share. Both receivers were almost identical in ADoT and in weight opportunity rating (WOPR). Fuller’s aforementioned shortcomings weighed heavier as he finished the year with 670 yards on 49 receptions (71 targets) and three touchdowns while his departed counterpart finished with 1,165 yards on 104 receptions (150 targets) and seven touchdowns. Fuller played 11 games in 2019 and had a drop rate of 8.5 per cent (11th in the NFL).

10. Austin Hooper, te, Cleveland Browns (ADP: 99, TE9): Cleveland signed Hooper to a four-year, $44 million contract in the offseason following his breakout year with Atlanta. Newly minted HC Kevin Stefanski has strongly signaled a preference for the 12 formation, lining up David Njoku and Hooper at the tight end position. During Stefanski’s time in Minnesota as an offensive coordinator, his tight ends were likely either blocking or setting up play actions as an extension of the run. Slot receivers like Jarvis Landry or Adam Theilen are Stefanski’s preferred method of attacking the middle of the field. Of Baker Mayfield‘s 521 projected attempts, Landry and Odell Beckham Jr. should retain close to 50 per cent target share, leaving around 260 targets to divide between Nick Chubb, Kareem Hunt, Njoku, Hooper and the WR3.

In 1979, Azymuth released Light as a Feather, which was the closest thing it ever had to international success. From this album comes “This Exists (Existo Isto),” a tune sampled in 2004 by O.S.T.R.

Now it’s your turn. Let us know in the comments below which players you’re wary of drafting for your Fantasy football team this season.

By Lucas Chan
Tags: 2020 NFL Draft Kit
This entry was posted on Sunday, July 19th, 2020 at 7:28 pm and is filed under 2020 NFL Draft Kit, Busts, FOOTBALL, Lucas Chan. You can follow any responses to this entry through the RSS 2.0 feed. Both comments and pings are currently closed.