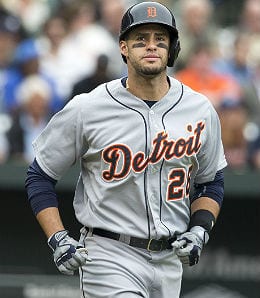 Outfield is a vital position given that you start anywhere from three to five players depending on your league, so obviously this is not an area you can ignore. Fortunately, there are tons of juicy options here to help you with whatever your needs are — power, speed or average, and in many cases, a combination of all three.

Some questions facing this position for the remainder of the season as August marches on: is Ryan Braun truly back as an All-Star? Can Nelson Cruz continue to buck the odds and defeat Safeco Field’s power restrictions? Can Jacoby Ellsbury pick up where he left off before getting hurt?

1. Mike Trout, Los Angeles Angels (1): The reigning AL MVP continues to put on nightly shows with his glove and bat. Earlier this season, he was walked to load up the bases with no outs so the opposing team could get to Albert Pujols. Just think about that for a moment.

2. Bryce Harper, Washington Nationals (7): What Harper has done so far this season has him making his case as the best hitter in the game or at least the most popular star. Through the first two months, he pretty much led the majors in everything.

3. Andrew McCutchen, Pittsburgh Pirates (3): McCutchen’s power was down early on, but we didn’t worry too much. This is a top five player, and soon enough the cream rose the to the top and his extra-base pop began to show up more often. Just look at his slugging by month after April. And defense? Wow. Take a look at the video below to watch Cutch catch ’em.

4. J.D. Martinez, Detroit Tigers (NR): Martinez has put in the work to improve his mechanics and make himself a better hitter. The results are starting to show themselves as he enjoyed a superb June and then an even better July.

5. Carlos Gomez, Houston Astros (8): Gomez was beaned early on this year, but shook it off and it was nice to see him show some great sportsmanship about the incident.

6. A.J. Pollock, Arizona Diamondbacks (92): The D-Backs’ first rounder in 2009 is proving last season was no fluke. Pollock is just entering his prime and, man, can he ever hit.

7. Ryan Braun, Milwaukee Brewers (5): Braun has bounced back this year and is on pace for his most runs since 2012.

8. Adam Jones, Baltimore Orioles (4): Jones is enjoying a better season, but early on it looked like he was headed for a career year. An ugly May and an even uglier August (so far) has stalled his pace.

9. Jose Bautista, Toronto Blue Jays (14): Bautista’s power has been in decline for several years, yet he remains one of the safest hitters to own in the game. He’s capable of driving in so many runs in the Toronto lineup.

10. Carlos Gonzalez, Colorado Rockies (2): Acquired by the Rockies in the Matt Holliday deal in 2008, 29-year-old Venezuelan Gonzalez experienced a major drop in his extra-base power last year, and he started even worse this season, slugging just .347 in April and .318 in May. However, he’s regained his pop since then, slugging by month .548 in June, .841 in July and .714 so far in August. CarGo is back, baby.

11. Nelson Cruz, Seattle Mariners (33): Cruz took his AL-leading 40 homers from last year to Seattle to breathe life into the Mariner offense. How’s that working out for him? Pretty freaking awesome; he’s even upped his walk rate.

12. Jacoby Ellsbury, New York Yankees (6): Ellsbury’s extra base pop was almost non-existent and his work on the basepaths had suffered before he hurt his knee. He’s back now, but Year Two of his ill-advised massive deal is not going as well as the first season — which wasn’t a great year, either.

13. Lorenzo Cain, Kansas City Royals (85): Cain ended the first half hot, going 8-for-16 with two homers, six RBI and a steal over the last four games before the break to cap a tremendous first half. He’s really improved his batting eye and is finally consolidating all the skills he previously flashed.

14. Brett Gardner, New York Yankees (41): Notwithstanding his ongoing struggles against David Price, Gardner is enjoying a career year. He could flirt with 20 homers, 25 steals, and his highest full-season BA ever.

15. Justin Upton, San Diego Padres (18): The durable Upton is headed for a fifth straight season of at least 550 at-bats, he’s improved his contact rates and has reached double-digit steals for the first time since 2012 (going nearly perfect on the basepaths). Unfortunately, after a great start, his BA has plummeted, taking him off his career year trajectory.

16. Starling Marte, Pittsburgh Pirates (28): Marte was as hot as anyone in the game in July as he enjoys his most productive season yet.

18. Yasiel Puig, Los Angeles Dodgers (11): Puig is a superb batsman, although his BA has slipped in each season since his rookie effort. Still, through almost 1,200 career at-bats, he’s a .294 hitter.

19. Yoenis Cespedes, New York Mets (22): Cespedes made better contact last year, and while he’s stayed healthy so far this season, he wasn’t nearly as productive as a Tiger, and since getting dealt to the Mets, the early returns are not promising, either.

20. Charlie Blackmon, Colorado Rockies (105): Blackmon has turned into a serious offensive instigator for the Rox. He’s been very durable this year, putting him on pace for a career best in runs.

Is Father Time finally catching up with Ortiz as he inches toward 500 career dingers? He definitely seems to need more rest this season — especially against tougher lefties.

Beltre is getting long in the tooth, but remains one of the safest options at third base. He got off to a bit of a slow start in 2015 before snapping a mini skid. Many believe that Beltre will really regress this year, and certainly the power drop off last year was worrisome, but we’ll believe it when we see it. We’re definitely expecting his BA to dip after last year’s .345 BABIP, but otherwise he’ll be a very productive option once again.

Unfortunately, a hamstring injury delayed the start of Meadows’ 2014 season, but that didn’t stop him from showing what he’s capable of at full-season ball, hence his major boost from last year. He was very productive during his time in the Sally League, although we’d like to see him make better contact because that could be an issue as he moves up and faces better competition. Meadows also hit way more groundballs than usual last year, and we’re hoping that trend reverses itself so he can take advantage of his power potential. He’s begin the season at High-A in a very productive manner and, really, all he needs at this point is a stretch of good health so he can develop into his immense potential.