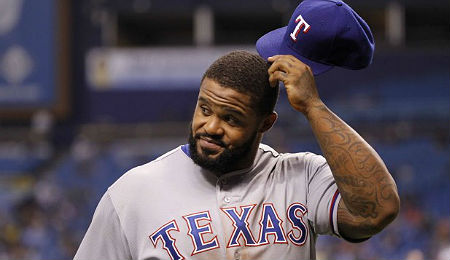 The 2015 RotoRob MLB Draft Kit rages forward today with yet another cheat sheet. So while you wonder whether Jacoby Ellsbury will be ready when the games count, let’s review the top 50 first basemen in Fantasy baseball for 2015.

First base is loaded with studs, easily more than any other infield slot. This year, a newcomer has slugged his way into the top tier after Jose Abreu lit up the bigs in 2014.

This is a massively deep position with plenty of stars to choose from. As many as a half dozen of these dudes could go in the first round. If you don’t get the player you want early on, don’t worry about it, you can still find value with a mid to late round pick, while piling up on scarcer positions early on.

Questions heading into this season: What can Abreu do for an encore? Is this the year Anthony Rizzo breaks through for 40 bombs? Can Mark Trumbo stay healthy and bounce back? Will Matt Adams ever hit lefties enough to live up to his potential?

Players that will soon be first base eligible, but are not listed here include: Pedro Alvarez, Ryan Zimmerman and Chris Carter.

1. Paul Goldschmidt, Arizona Diamondbacks (1): A hot streak in early July had Goldschmidt’s slash line up from his massive 2013, and while he continued to roll that month, a broken hand on August 1 ended his season. He was likely headed for a career high in runs.

2. Jose Abreu, Chicago White Sox (14): Abreu settled in as the No. 3 hitter in the White Sox lineup last year, and he’ll reprise the role in 2015. He instantly proved he was one of the best bats in the majors, mashing 36 homers, scoring 80 runs on a bad team and hitting nearly .320. A 964 OPS as a first-year man? Holy crap. Small wonder he was considered for the 2014 RotoRob Fantasy Baseball Stud of the Year. Oh, and Abreu can pick it at first — in any language (see video below).

3. Miguel Cabrera, Detroit Tigers (1 at 3B): An 11th straight 25-homer season has Cabrera within shouting distance of 400 career dingers and he won’t be 32 until next month.

4. Edwin Encarnacion, Toronto Blue Jays (6): EE’s games played at first base has risen each season since his first full year in Toronto, going from 25 to 68 to 79 to 80 last year. He’s slowly declined since his career year in 2012, but still scored 75 runs last year for the fourth time in his career.

5. Anthony Rizzo, Chicago Cubs (12): Rizzo just keeps getting better and despite a late-season injury that cost him most of the final month, he was at his best in September, going 15-for-38 (.395) with five doubles and a 1205 OPS. Still just 25, he had a whopping .240 ISO while his K rate rose only slightly. In fact, just two players in baseball had a higher ISO with a strikeout of under 20 per cent: David Ortiz and Encarnacion. If Rizzo stays fully healthy this year, expect 40 bombs.

6. Adrian Gonzalez, Los Angeles Dodgers (8): The durable Gonzalez had 660 plate appearances last year — the seventh time he’s had at least that many. He also put up his most total bases since arriving in L.A., and while the declining OBP is a concern, he remains an extremely productive hitter and excellent source of power.

7. Freddie Freeman, Atlanta Braves (5): Freeman has exhibited an exceptional batting eye against fastballs and has racked up at least 175 hits in each of the last two seasons, although — not surprisingly — he was unable to duplicate his superb 2013.

8. Albert Pujols, Los Angeles Angels (7): In mid-August, Pujols tied Ted Williams, Frank Thomas and Willie McCovey on the all-time home run list. Phat Albert stayed healthy last year and managed to bounce back after a down year in 2013, reaching 105 RBI for the 13th time on his way to topping 1,600 for his career. Now 35, he’s definitely fading, but remains a highly productive hitter.

9. Prince Fielder, Texas Rangers (2): The normally highly durable Fielder was limited to 150 at-bats last year because of surgery to repair a disc in his neck. Although his walk rate was up, it was obvious something was drastically wrong with him while he was active. Expect Fielder’s slugging to bounce back now that he’s healthy.

10. Victor Martinez, Detroit Tigers (3 at DH): V-Mart sure has made collectors of his cards happy with his play in recent years. The knee remains a big worry, but this dude can flat out rake and last year enjoyed his best walk rate since 2009 as part of a career season — at the age of 35.

11. Joey Votto, Cincinnati Reds (4): Last year, a knee problem caused Votto to miss 100 games, forcing the Reds to shift third baseman Todd Frazier over to first. Votto is healthy again, and looking to play a full season in 2015 as he tries to return to his former glory.

12. Mark Trumbo, Arizona Diamondbacks (10): Need power? Trumbo’s your man, as it’s by far his best attribute. However, he whiffed 184 times in 2013 and while he improved his contact rate in his first season with the D-Backs, no one will accuse him of being a solid contact hitter. Trumbo also qualifies in the Outfield.

14. Todd Frazier, Cincinnati Reds (18 at 3B): Frazier enjoyed a breakout season last year as he just missed 30 dingers and he continues to launch homers this spring. There may not be a ton of upside here, but he’s already a productive hitter. Frazier also qualifies at Third Base.

15. Brandon Belt, San Francisco Giants (18): Belt looks good this spring, which is just what we wanted to see after his 2014 campaign was ravaged by injuries. Looking for a bargain later in your draft? Belt has the capability of being a start-worthy first baseman in standard formats if he stays healthy.

17. Carlos Santana, Cleveland Indians (28): Santana tied his career high in dingers last year, while setting a new personal best in RBI. His overall hitting wasn’t as good, but the fact that many of his doubles became homers was something his Fantasy owners were not going to gripe about. Santana also qualifies at Third Base.

18. Adam LaRoche, Chicago White Sox (21): Just when it looked like LaRoche was bottoming out, he enjoyed a nice comeback season in 2014, despite missing about a month. His slugging bounced back, although not quite to normal career levels. LaRoche’s overall numbers may dip with the move to Chicago, but expect a nice boost in dingers.

19. Chris Davis, Baltimore Orioles (3): You know the deal with Davis. He’s one of the most extreme power hitters with very poor contact skills. Last year, he “only” launched 26 as he battled injuries and a suspension, yet he still whiffed nearly 175 times. Davis also qualifies at Third Base.

20. Justin Morneau, Colorado Rockies (24): When Josh tapped Morneau for his RotoDerby team, he said Morneau could top last year’s homer total by the All-Star break. Well, Morneau came close, but second half injuries limited him to just four jacks, so while his slash line was much improved, he was unable to build on 2013’s good health.

By RotoRob
Tags: Jacoby Ellsbury, MLB Draft Kit
This entry was posted on Monday, March 23rd, 2015 at 1:35 pm and is filed under 2015 RotoRob MLB Draft Kit, BASEBALL, Cheat sheets, Michael Seff, RotoRob. You can follow any responses to this entry through the RSS 2.0 feed. Both comments and pings are currently closed.