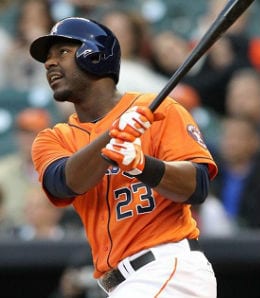 Our series of 2015 Fantasy baseball cheat sheets continues today. So while you wonder if Rafael Soriano has anything left to help the Cubs, let’s review the top nine designated hitters in the game.

Designated hitters may be a boring necessity to list, but that’s not to say that there aren’t some very nice players in here that simply fall through the cracks because they don’t qualify elsewhere.

1. David Ortiz, Boston Red Sox (1): Is Father Time finally catching up with Ortiz as he inches toward 500 career dingers? He definitely seems to need more rest this season — especially against tougher lefties.

2. Chris Carter, Houston Astros (NR): Carter is not hitting as well this year, but remains a great source of power (see video below) and is drawing tons of walks.

3. Kennys Vargas, Minnesota Twins (NR): A recent demotion punched a hole in Vargas’ value, but this kid has serious pop and now that he’s back after three weeks on the farm, he should be motivated to mash.

4. David DeJesus, Tampa Bay Rays (NR): DeJesus remains a solid contact hitter, is doing a great job of getting on base, and his extra-base pop has improved a tad.

5. Jimmy Paredes, Baltimore Orioles (NR): Paredes started the season like a house on fire, but has cooled. Still, his productivity has been impressive.

6. Joey Butler, Tampa Bay Rays (NR): A 15th round pick in 2006, Butler has had a long road to the majors and now that he’s finally getting a real shot, he’s been hitting up a storm, batting .330 through 30 games with nice power. He failed to stick in Texas or St. Louis, but seems to have found a home in Tampa Bay.

7. Corey Hart, Pittsburgh Pirates (NR): This former top prospect’s career has been fizzling thanks to injuries and ineffectiveness. At this point, Hart is merely a pinch hitter for the Pirates — and not a very good one at that.

8. Jesus Montero, Seattle Mariners (NR): Why the offensively struggling Mariners haven’t called up Montero is a mystery. His power is down a but, but he’s batting .315 at Triple-A.

9. Zach Walters, Cleveland Indians (NR): Walters is a .280 hitter in his minor league career, but has yet to come close to duplicating that in the majors, where his career average is over 100 points lower through 75+ games.

Now it’s your turn. Let us know in the comments below who is too high or too low or missing.