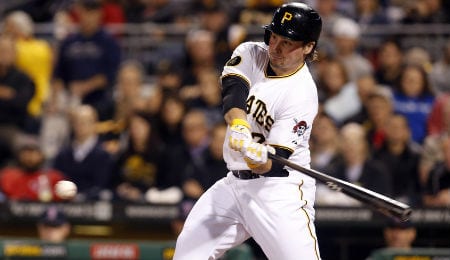 Travis Snider is expected to be the starting RFer in B-More. (Charles LeClaire-USA Today Sports)

Now they face the challenge of repeating with a roster that is almost identical, with the only real serious addition being outfielder Travis Snider — a player we recommended on the wire in August — from the Pirates. He’s got some skills (see video below), but if this is your marquee offseason addition, people have reason to question you.

You’ve got to figure all four other teams in the East — the Yankees, Blue Jays, Red Sox and Rays — will be marginally to significantly better this year, but the O’s pretty much opted to rest on their laurels after taking home their first division crown since 1997 and reaching the ALCS.

Nelson Cruz and his league-leading 40 homers are now gone to Seattle to try to breathe life into a struggling Mariner offense. Long-time B-More outfielder Nick Markakis has moved on, and while the Orioles may miss his durability, they won’t miss his waning productivity. Also gone is southpaw Andrew Miller, who played such an important role in the Baltimore bullpen last season, but has moved over to the Yankees, where he could get a chance to replace departed closer David Robertson. There are concerns that the Orioles’ bullpen lacks the depth it needs given this loss.

So how in the hell can this team possibly be as good as it was in 2014?

The key for Baltimore is health, and the fact that it is getting a trio of players back this year that struggled with injuries or were hampered by ineffectiveness/suspension in 2014 suggests that there could be enough organic improvement to compensate for executive VP Dan Duquette’s lack of activity this winter.

The list of returning stars begins with catcher Matt Wieters, who was sidelined for most of the year because of Tommy John surgery. He had smashed five homers and was batting well over .300 — finally showing the power-BA combo we had expected of him for years — before going down. The three-time All-Star’s ability to build on that breakout is paramount to the Orioles’ chances this season.

The infield will also be bolstered by the return of third baseman Manny Machado, who underwent season-ending surgery on his knee and missed almost half the campaign. The good news for Fantasy owners is that they’ll be able to get him for a song this year — Machado has a chance to massively outperform his ADP if he can finally stay healthy. Keep in mind that he won’t turn 23 until midseason.

The other vital bounceback Baltimore is counting on is first baseman Chris Davis, who dealt with some injuries and a 25-game suspension to end the season as he fell galaxies shy of what he did in 2013, dropping exactly 300 points in OPS.

No one player has a chance to infuse major power back into B-More more than Davis, who walloped 53 homers two seasons ago. The team has made some recent depth moves — signing Jayson Nix and the pending signing of Everth Cabrera — but it will be Davis’ ability to get closer to his 2013’s numbers that will really dictate how well Baltimore does this season.

Now it’s your turn. Let us know in the comments below whether you think Baltimore defend its AL East crown this season.