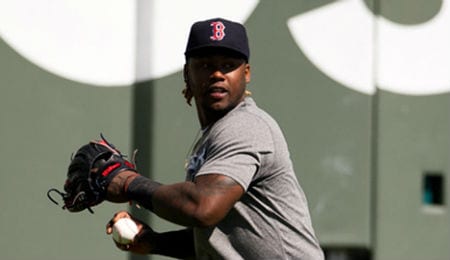 We’re back with yet another cheat sheet. So while you wonder whether Shane Victorino deserved to beat out Rusney Castillo for a job, let’s turn our attention to the infield, specifically the top 50 shortstops in Fantasy baseball.

Yuck. The shortstop landscape in 2015 is short on talent. If you want a top player, you better dip in early or risk getting stuck with a big question mark. Note that even our No. 2 shortstop this year (Hanley Ramirez) is likely going to lose eligibility at the position after 2015, clouding the situation even further next year. Yes, there are some nice prospects on the way to help beef up shortstop (Carlos Correa, Addison Russell and Corey Seager, among others), but it’s unclear any of them will be arriving this season to bring depth.

There’s a big drop off after the top handful of shortstops are off the board, and while many of the lower ones will help you in steals, that may be about all they’ll do. So this is a position that may require some overpaying at.

Some key shortstop questions heading into 2015: As we ask every year, can Troy Tulowitzki stay healthy? Will learning the Green Monster affect Hanley Ramirez’s offensive output? Can Alexei Ramirez continue his power renaissance? How will Ben Zobrist adjust to life on the west coast? Can Jhonny Peralta stay healthy and continue to build on that Cardinal magic? When will Javier Baez be back in the bigs and will things go better for him this time?

Note that Marcus Semien is expected to be the starting shortstop for the A’s, but does not yet qualify at the position. If he did, he would rank 16th on this list.

1. Troy Tulowitzki, Colorado Rockies (1): Tulowitzki is reportedly healthy this spring, but the big test will be in his getting through, say, 150 games without some kind of medical issue. He tore his hip labrum in 2008 and finally had surgery on it last year. Last season, Tulo only managed 375 plate appearances, which is shame as luck was on his side — a .355 BABIP helped him post a .340 BA. Don’t pay for a repeat of that high an average, but there’s no better power source at SS than a healthy Tulowitzki.

2. Hanley Ramirez, Boston Red Sox (2): Ramirez is back where it all began for him, only now he’s an outfielder who has to learn the intricacies of playing the Green Monster. Let’s hope that doesn’t affect his offensive performance in what will likely be his final season with shortstop eligibility. Based on Ramirez’s Opening Day show, which included two dingers — the latter of which was a grand salami (see video below) — we’re guessing it won’t have an impact on him.

3. Ian Desmond, Washington Nationals (4): With four straight seasons of at least 21 steals, Desmond has become a dependable source of speed. And while he did manage a career-best 46 walks last season, if you’re playing in a league that tracks walks, he’s not your best bet. Still, Montreal’s third rounder from 2004 has put together three straight 20-20 seasons, a definite gold standard at shortstop. The fact that Desmond has become a smarter baserunner only adds to his appeal.

4. Jose Reyes, Toronto Blue Jays (3): Assuming good health, Reyes is in line for a crapload of runs batting atop a lineup featuring returnees Jose Bautista and Edwin Encarnacion plus newcomer Josh Donaldson. The fact that Reyes is murdering the ball this spring doesn’t hurt. He’s just 45 swipes shy of 500 for his career, and while we doubt he reaches that this year, he won’t be far off by the time 2016 rolls around.

5. Starlin Castro, Chicago Cubs (8): Castro gained consideration as the 2014 RotoRob Fantasy Comeback Player of the Year as he enjoyed a productive, albeit injury-shortened season. We love the fact he showed some modest progress in his walk rate — long his weakest area. Castro also cut down on his strikeouts to really consolidate some batting eye gains. If those are for real, and his speed comes back in 2015, he could easily rise in these rankings.

6. Alexei Ramirez, Chicago White Sox (10): Ramirez struck out more than usual last year, but has always been a very strong contact hitter. Drawing walks, however, has never been his thang. After showing serious progress in this regard in 2011, it took Ramirez a combined three years to surpass his 2011 walk total. He didn’t hit quite as well last year, but made up for that by experiencing a power renaissance.

7. Jimmy Rollins, Los Angeles Dodgers (17): After spending his entire career with the Phillies, Rollins moves to the west coast where he’ll try to help the Dodgers take the next step. The move to Dodger Stadium may slightly reduce his numbers, but it won’t be a large factor by any means. A more likely scenario is Father Time creeping in again after Rollins enjoyed a bit of a recovery last year. We have our doubts about him being quite as productive this season, but he remains a very solid bet at shortstop thanks to his speed and power.

8. Elvis Andrus, Texas Rangers (6): Even though he’s been around for what seems an eternity, Andrus is still very young, and is coming off his first 35-double season. Unfortunately, that boost in extra-base pop came at a cost as his work on the basepaths regressed dramatically last year. Andrus dealt with a back problem this spring, and that may help explain what’s been a sluggish start to 2015. Texas signed him to a massive extension, but don’t be shocked if he’s peddled at some point this year, depending on how the Rangers fare.

10. Jean Segura, Milwaukee Brewers (5): With 64 steals in the past two seasons, Segura is all about the speed, but he’s also a superb contact hitter whose K rate has dipped each season. Unfortunately, patience is not his thang, although he did show modest improvement in that regard last year. This Dominican lost a lot in the power department last year, but is young enough to recover that. What we really need out of Segura this year is a return to the 30 steal mark.

11. Alcides Escobar, Kansas City Royals (16): This former Venezuelan League batting champion has been inconsistent, BA-wise, in his career to date, but last year managed a fine .285 mark while topping 30 swipes for the second time in three years. Escobar had a career high in runs last year, and could shatter that mark again batting atop the KC lineup in 2015.

12. Jhonny Peralta, St. Louis Cardinals (19): In June, Peralta’s stock was dropping, although he did manage a season-best 10 doubles that month. He picked up his game in July, getting on base at a better clip before enjoying his finest month in August. Peralta really cooled off down the stretch, going just 20-for-90 in September with a season-worst .290 OBP. Overall, the vet had a major bounce back, seeing his most at-bats since 2009 and proving to be a productive part of the Cards’ attack.

13. Xander Bogaerts, Boston Red Sox (15): Okay, so Bogaerts didn’t tear the house down last year. Still, there was plenty to like about his rookie season. He scored plenty of runs and held his own BA-wise in his first full season. Remember, this kid was just 21 last year. Bogaerts is a superb post-hype target this spring. Bogaerts also qualifies at Third Base.

14. Erick Aybar, Los Angeles Angels (18): Believe it or not, Aybar is now one of the longest serving positional players who has played with just one team in his career. He’s settled in with respectable pop, having recording four straight seasons of at least 30 doubles, and while he’s still failed to top his 2011-12 level, he bounced back last year after a down season in 2013, setting a new personal high in runs scored.

15. Danny Santana, Minnesota Twins (NR): After spending most of his rookie campaign in the outfield, Santana will be the Twins’ Opening Day starter at short this season, likely ensuring he’ll again qualify at the position in 2016. He enjoyed a splendid rookie campaign, but his .405 BABIP screams serious regression. Still, we’re wondering how Santana’s 70 runs in just 430 plate appearances will translate over a full season. Santana also qualifies at Outfield.

16. J.J. Hardy, Baltimore Orioles (11): Hardy (shoulder) will begin the season on the DL, but is unlikely to miss more than a few days of action. He’s never had much of a batting eye, but at least he made some progress in that regard last year. We were a tad surprised the O’s gave him a three-year extension, as they have the potential to regret the move.

17. Andrelton Simmons, Atlanta Braves (12): Despite his solid contact skills, Simmons hasn’t been able to reach even .250 over the past two seasons. And that 17-homer season he put up two seasons ago is looking a little like an outlier, although in fairness, he may still have untapped power potential. So with a middling BA, very little power and almost no speed, Simmons’ appeal is waning as we enter 2015.

18. Jordy Mercer, Pittsburgh Pirates (33): Mercer took over as the Pirates’ everyday shortstop last year, and while his tools are respectable across the board (except for patience), he doesn’t do any one thing extremely well. Last year was his most productive campaign in the bigs, and he even made modest progress in his walk rate, although it remains substandard. Without a real spike in that regard, Mercer’s OBP will remain a liability, capping his overall value.

19. Wilmer Flores, New York Mets (41 at 3B): Flores has his share of fans, especially after showing decent development as a hitter last year. He’s a great contact hitter, but doesn’t provide the speed you usually expect out of a middle infielder. Having said that, there’s untapped power here, and that — with the potential for some solid averages — is where Flores’ appeal lies.

20. Nick Ahmed, Arizona Diamondbacks (NR): Two years ago, Ahmed was part of a crowded shortstop situation in Arizona, but now he’s finally won the gig. The rookie has very little MLB track record — just 25 games and 70 at-bats last season — but he’s flashed very nice contact skills in the minors. Most intriguing is Ahmed’s speed potential. This is a dude that swiped 40 bags at High-A in 2012 and 26 at Double-A the following year. Ahmed’s steal totals have waned as he’s risen through the ranks, but he obviously has the capability to be an asset in this regard.

21. Chris Owings, Arizona Diamondbacks (27): In most leagues, Owings only qualifies at shortstop to begin the season, but that will soon change as he’s been named the D-Backs’ starting second baseman, pushing Aaron Hill to the trade block. Owings enjoyed a decent rookie effort last year, seeing much more action while flashing developing extra-base power. The key for him will be figuring out how to get on base more often.

Crave more in-depth Fantasy analysis? Then join us every Thursday at 9 p.m. EST for RotoRob Fantasy Baseball Weekly Podcast on Blogtalkradio as we entertain and edify you for an hour or more each week. We’re off this week, but will return live on April 16 with guest Tim McLeod from Pattonandco.com. Tune in here.