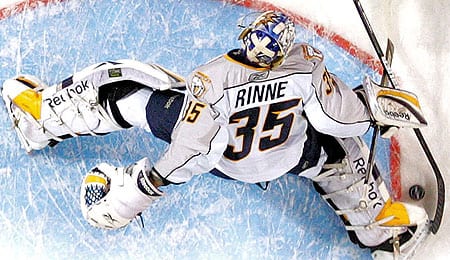 Pekke Rinne picked up his play at the right time last season.

The 2013 RotoRob NHL Draft Kit races forward today with another cheat sheet. Stay tuned for our rankings of the three forward positions, coming shortly. So while you wonder whether Travis Zajac is worth all that money, let’s review the top 35 goalies for the 2013 Fantasy hockey season.

The truncated schedule is going to open things up a good bit this Fantasy season. Martin Brodeur is another year older but has had a few months extra rest. Some guys like Cam Ward could see their fortunes improve a bit with upgrades on their team. Then there is the uncertainty of Roberto Luongo which is going to drive Fantasy owners batty. Either he will be showcased or actually get traded just before or just after the season starts.

The bigger problem with some goalies is the season length. Do we know if Jonathan Quick will truly be 100 per cent after offseason back surgery? Will Cory Schneider flourish as the No. 1 in Vancouver? Can Ilya Bryzgalov play more like his .925 second half save percentage or will he worry more about the Russian Space Program and monkeys? Then there are the backups like Thomas Greiss, who could see enough time to maybe steal a position because of the shortened season. Oh and then there is the split between St. Louis netminders Jaroslav Halak and Brian Elliott. We could go on and on here, but for now, let’s just get to those rankings, shall we?

1. Jonathan Quick, Los Angeles Kings (11): We did have a feeling Quick would come on last season, but no one could have known he would have six shutouts by the beginning of December. All he did was put up incredible numbers for a team that spend three-quarters of the season trying to figure out how to score goals. Quick’s 1.95 GAA, .929 save percentage, and 10 SO should have made him a Vezina winner, but voters are voters. He was our 2012 Fantasy Stud of the Year and could do it again this season. Back surgery? No problem. Stanley Cup hangover? What hangover? Quick is 100 per cent and ready to go. That is fine by us.

2. Henrik Lundqvist, New York Rangers (4): It is tough not to rank the reigning Vezina winner number one but, hey, just watch us. Why? The late season swoon Lundqvist had was too much to ignore. In Fantasy crunch time (from March on), he posted a meager .895 save percentage and was well rested. Add in the burdens of being a new father and you have to wonder how he will respond. Lundqvist did end up with 39 wins and a .930 save percentage last season — not too shabby. With the shortened schedule, he could see around 38-to-40 starts and produce Vezina-caliber numbers.

3. Pekka Rinne, Nashville Predators (2): Rinne did slip a bit last season, but he picked it up right before the playoffs and that is key. He can play a ton while getting better in the process. The shortened season seems to be ideal for a workhorse like Rinne. Despite the slippage, he still won 43 games and was knocking on the Vezina door once again. Nashville has a pretty solid squad in front of Rinne again so expect another Fantasy season of joy.

4. Tuukka Rask, Boston Bruins (36): Hey, let’s take a few stabs in the dark, but Rask will be the number one while Tim Thomas finds whatever he is looking for and a way out of Boston. Rask will split a little time with Anton Khudobin, but that will help keep his stamina up. Boston has a bit easier schedule than most in the East and that should help Rask build a rhythm that could set up for a very nice Fantasy season. Being in a good division to pad his stats a bit should translate into solid numbers. For this season, Rask is a 1 or 1A in leagues, so get him!

5. Cory Schneider, Vancouver Canucks (35): With Luongo eventually taking a back seat (whether by getting dealt or just shifting to the bench), the job is now Schneider’s. The Canucks make it pretty easy to be a goaltender that can contribute Fantasy-wise in a big way. In limited time, Schneider shouldered the load and was more effective against the Los Angeles Kings than Luongo ever was. Yes, his number of starts might be a bit fewer than the top guys, but the numbers will be there.

6. Mike Smith, Phoenix Coyotes (33): Smith went a whole month without losing a game and literally was the best Fantasy goalie last season come playoff time (his .940 save percentage after March 1 led everyone). With a defense first coach in Dave Tippett and some emerging players, it seems all Phoenix needs is a goalie and a system for good things to happen. Thankfully for your Fantasy team, Smith can deliver… right, Neo? Right!

7. Braden Holtby, Washington Capitals (NR): Youth has been served among the NHL goaltender ranks, so people are going to see a lot of new names heading the list. Holtby nearly got the Capitals to the Conference Finals — if only his team could have scored a couple more goals along the way. His talent is undeniable and this is another situation where the season length helps. Holtby can help a Washington team take it to that next level if the offense comes along. Consider him a breakout/not so sleeper candidate.

8. Semyon Varlamov, Colorado Avalanche (26): Varlamov proved he could stay healthy then got it together for a pretty nice run at the end of the season. That should serve him well for this season. Colorado has a team that can make some noise, but it needs its goaltender to be “the man.” While he is not at elite status yet, Varlamov has the tools to get there. He is another sleeper choice and is worth the pick.

9. Kari Lehtonen, Dallas Stars (29): Lehtonen would be higher if we knew what Dallas was going to look like with all the changes. His numbers were great on a below average team. The bonus is Lehtonen’s durability — a glaring knock on him in his time with Atlanta — should not be considered an issue anymore by Fantasy owners. Dallas will be hanging around the playoff conversation because of Lehtonen.

10. Ilya Bryzgalov, Philadelphia Flyers (5): Bryzgalov had one of those uneven seasons in 2011-12, but for some reason I think he can get it together long enough to be Fantasy viable and relevant this season. The 48-game schedule helps in this case and while the Flyers face a daunting schedule, they have enough firepower so that a solid Bryzgalov performance would get the job done for Fantasy owners. Cosmonauts be damned!

11. Carey Price, Montreal Canadiens (3): Price would be in the top five if the team in front of him ever could figure out how to support his efforts. He is an all world goaltender, but some nights his team has no clue what to do and when they do, it is never consistent enough. Yet Price plays on and he has to be given a ton of credit for that. He also appeared in a whopping 65 contests last season and that may bode well for this season. He could carry the Habs to a near .500 record by himself.

12. Miikka Kiprusoff, Calgary Flames (22): The Kipper is a battler no matter how much age is catching up and I just guess he gets underestimated because Calgary has been around eighth to 10th place in the West the last few seasons. His 2.35 GAA and .921 save percentage on an average defensive team is pretty solid. The Flames are in too much of a state of flux to rank Kiprusoff any higher, but he is worth a pick after the top goalies are taken. People could do much worse, right?

13. Brian Elliott, St. Louis Blues (NR): Elliott came out of nowhere with a .940 save percentage and a GAA that resembled the elite in KHL leagues at 1.56. When you have nine shutouts in 36 starts, that is going to garner attention and in a Ken Hitchcock system, that means Fantasy gold if you have Elliot. Granted, Elliot won’t start more than, say, 25 games, but in those starts you’ll get value. Just think ‘one in four, one in four.’ Elliott is a pretty good No. 2 to have because for one more season at least it will work in St. Louis.

14. Jaroslav Halak, St. Louis Blues (19): Halak was only asked to play in 46 games last season so he should be plenty fresh for this season’s “sprint.” He’ll likely appear in 25-to-28 games and put up numbers a little higher than last season but still good enough to be a good number two. A 2.00 GAA is out of the question but 2.10 or 2.20 would still be pretty acceptable. It will be worth it for one more season until Hitchcock’s system begins to disintegrate.

15. Cam Ward, Carolina Hurricanes (13): Ward has definitely seen a pretty good upgrade in talent around him with the likes of Jordan Staal and Alexander Semin. While Ward’s GAA may not be as good as others, his save percentage and win total should improve as Carolina is the second best team in the Southeast on paper. That might get the Canes into the playoffs, so a hot stretch run may mean something. He is a good number two… maybe even 1B.

16. Martin Brodeur, New Jersey Devils (10): Hopefully, Brodeur is getting in shape for training camp because if you saw “Operation Hat Trick,” well, it was not pretty. The old guy can still produce and in the playoffs, he led New Jersey to within a couple games of another Stanley Cup. No one expected that, not even Brodeur. His numbers are still respectable and again he will be protected in the early and middle parts of the season.

17. Marc-Andre Fleury, Pittsburgh Penguins (8): Fleury has lost his way and it happened before the Flyers shellacked him in every way imaginable during the playoffs. It will take some time for him to get his groove back fully and that is why Tomas Vokoun was brought in. Vokoun could spell Fleury with the condensed schedule and that does not hurt in the least. Fleury could go higher but we will wait for now.

18. Jimmy Howard, Detroit Red Wings (16): The retirement of Niklas Lidstrom just leaves me feeling a little sour on Howard. The divisional play could also be problematic. Howard really has something to prove this season and I am not sure if he can do it to be honest. The Red Wings really could finish third or fourth in the Central. Call it a hunch.

19. Ondrej Pavelec, Winnipeg Jets (20): Pavelec has improved, but not quite enough to crack the Top 15. He has the skill set, but for whatever reason cannot put it together consistently enough. Winnipeg’s brutal travel schedule may be the biggest reason for this ranking and why if you can stay away from a guy like Pavelec, you may be better off.

20. Antti Niemi, San Jose Sharks (17): Alert! Greiss may ultimately steal this job away from Niemi so keep an eye on this throughout the season. Greiss has definitely seen results under a new exercise regimen and people have noticed. Niemi is good enough, but can he fend off the feisty German? Time will tell.

It will be interesting to see what happens next as we head to the forwards, but I can tell you this: expect even more surprises. Happy drafting!

By Chris Wassel
Tags: Martin Brodeur, Travis Zajac
This entry was posted on Thursday, January 17th, 2013 at 12:05 pm and is filed under 2013 RotoRob NHL Draft Kit, Cheat sheets, Chris Wassel, HOCKEY. You can follow any responses to this entry through the RSS 2.0 feed. Both comments and pings are currently closed.