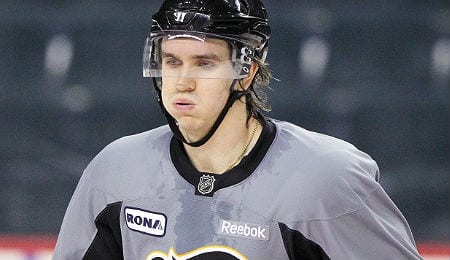 Mikael Backlund, C, Calgary Flames (ESPN: 4.2 per cent; CBS: 14 per cent): A first round pick of the Flames in 2007, Backlund has never scored more than 18 goals or 39 points through parts of seven seasons. He has shown flashed of talent (see video below), but has generally been a disappointment. With that in mind, four goals and nine points so far on the season don’t seem like much. However, when you consider he’s played just 14 games, that changes things.

After struggling through abdominal surgery and its accompanying issues, Backlund appears to be back and better than ever. In three appearances in Week 13, the Swede collected three goals, five points, a plus-3 rating, a shorthanded point, a game-winning goal, 11 shots on goal, 19 face-offs won, three hits and a block. Keep your eyes on this guy; he could be the perfect mid-season steal for your Fantasy team. Backlund may have been our 47th ranked centre to start the season, but he could potentially finish much higher.

Shane Doan, LW/RW, Arizona Coyotes (ESPN: 28.2 per cent; CBS: 35 per cent): The Coyotes may be on track for their worst season in a long time, but don’t tell that to our 38th ranked right winger, Doan. The former seventh overall pick had a great week with a goal, three points, six penalty minutes, three power play points, 12 shots on goal and 10 hits. He sits fifth on the team in total points (22) and has nine goals with a minus-13 rating.

Eric Fehr, RW, Washington Capitals (ESPN: 8.8 per cent; CBS: 23 per cent): He may be sixth on the Caps in total point scoring, but Fehr’s 13 goals are tied with top line centre Nicklas Backstrom for second-best on the team. In 38 games, Fehr has 21 points and a plus-13 rating, including two goals, five points, a plus-5 rating, a shorthanded point, six shots on goal, 23 face-offs won, four hits and two blocked shots last week alone.

Melker Karlsson, C, San Jose Sharks (ESPN: 1.9 per cent; CBS: 10 per cent): An undrafted Swedish pivot, Karlsson has been a surprising stud for the Sharks, scoring six goals, 10 points and a plus-4 rating in 14 games. He’s currently on a five-game goal streak, and had four goals, a plus-2 rating, a power play point, eight shots on goal, a hit and five blocked shots in Week 13.

Mike Fisher, C, Nashville Predators (ESPN: 26.5 per cent; CBS: 25 per cent): After taking longer to recover than expected from an Achilles injury, “Mr. Carey Underwood” appears to be back to normal with seven goals, 14 points and a plus-3 rating through 20 games with the league-leading Nashville Predators. Fisher notched two goals, three points, a plus-2 rating, seven penalty minutes, eight shots on goal, 39 face-offs won, two hits and three blocks last week.

No. 1. David Backes, C/RW, St. Louis Blues: Week 13 was an absolute blast for Backes. In three games, the big power forward had five goals, eight points, a plus-4 rating, two penalty minutes, two power play points, 10 shots on goal (50 per cent shooting percentage, wow!), 17 face-offs won, eight hits and a blocked shot. It certainly didn’t hurt for Backes to have a four-goal effort in a 6-0 clobbering of the Coyotes, just three days removed from a 7-2 thrashing of San Jose.

No. 2. Joni Ortio, G, Calgary Flames: Making his first appearance on RotoRob.com, the young Finn is this week’s No. 2 “Stud” with a 36-save shutout in one appearance.

No. 3. Niklas Svedberg, G, Boston Bruins: The Bruins backup wasn’t asked to make many saves, but he stopped all 14 shots faced last week for the easy shutout.

No. 1. Kari Lehtonen, G, Dallas Stars: Lehtonen once again finds himself a victim of the RotoRob.com “Studs and Duds Role Reversal Curse” — for the third week in a row. In three appearances last week, the Stars’ No. 1 netminder was winless with a 3.99 goals against average and a save percentage of .870. He hasn’t won a game or allowed less than two goals since a 7-1 thrashing of Minnesota back on January 3.

No. 2. Jonas Hiller, G, Calgary Flames: While Ortio had a stellar week, Hiller struggled tremendously, allowing eight goals for a 5.58 goals against average and a save percentage of .818 in two games in Week 13.

No. 3. Mike Smith, G, Arizona Coyotes: Smith has been among the worst netminders in the league all season, and last week was more of the same. In three games, the mangy ‘Yote collected one win, a 4.01 goals against average and an .888 save percentage.

And that’s it for our coverage of Week 13. How did you do? Tell us in the comments section below.