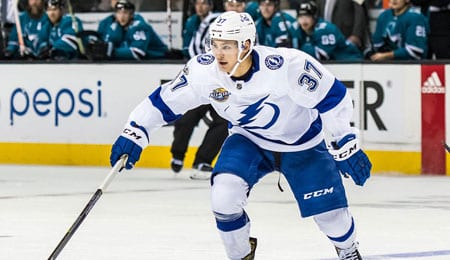 Yanni Gourde would be a second or first liner on any other team. (Douglas Stringer/Icon Sportswire)

The 2017-18 Fantasy hockey season is now finito, and here’s hoping you had a great campaign and that our waiver wire picks helped you kick some ass.

The dates in parentheses represent when we recommended them.

Dustin Brown, RW, Los Angeles Kings (Week Two): He probably wasn’t thrilled about how the season ended, but Brown sure reached into Fountain of Youth and came up with a fantastic campaign. After looking like a Fantasy non-factor for the last four seasons, he put together a 61-point effort for a new career best. Brown remains a tough as nails competitor, too, one whom you don’t want to keep your head down when you’re playing against.

Yanni Gourde, LW/RW, Tampa Bay Lightning (Week Seven): Man, the Lightning just keeps coming up with these amazing young players. Gourde was the most recent to become a Fantasy staple after busting through for 25 goals (seven on the PP) and 39 assists this season. And he’s Tampa Bay’s No. 3 right winger! That’s about as dependable a third line winger as you’ll find. Gourde has continued his great season into the playoffs, playing a key role on the power play (see video below).

Mattias Ekholm, D, Nashville Predators (Week Seven): Already shutdown defender, Ekholm broke through with his first double-digit goal season, while going a career high +25. To prove that was no fluke, all he did was get six points and go +9 in Nashville’s six-game, first round victory over Colorado.

Erik Haula, LW/C, Vegas Golden Knights (Week 11): Originally drafted by the Wild, Haula showed a bit of potential as a secondary source of scoring, but nothing that prepared us for what he’d do with Vegas this season. Then again, the Golden Knights’ roster was filled with such stories. Haula broke through for a career-best 55 points, firing more shots on goal than ever before. He was one of five Vegas players to score 20 or more goals as part of a very balanced attack.

Carter Hutton, G, St. Louis Blues (Week 11): As an unrestricted free agent, Hutton will likely be in demand this offseason after establishing himself as perhaps the best backup goalie in the game. He faced the most shots since his rookie season in Nashville, when he was in a timeshare. Hutton finished 10 games over .500 this season, which is damn impressive considering he played fewer than 35 games.

Nate Schmidt, D, Vegas Golden Knights (Week Five): Plucked from the Capitals in the expansion draft, Schmidt was yet another Golden Knight that proved to be a jackpot for Vegas. He scored a career-best five goals while more than doubling his personal highs in assists and points. Schmidt — who had never recorded a power play point in his career before this season — proved instrumental for the Knights with the man advantage, logging 10 helpers.

Travis Konecny, C, Philadelphia Flyers (Week 10): Konecny seemed to have a shoot-first mentality this season, but has untapped playmaking potential. Taken 24th overall by the Flyers in 2015, he really broke out this season, and with a tad more consistency and some maturity, this kid is really going to be something going forward.

Cam Ward, G, Carolina Hurricanes (Week 11): Just when it appeared 34-year-old Ward was nearing the end of his career, he once again emerged as the No. 1 goalie for the Hurricanes. While he didn’t have to make nearly as many saves last season, he did so at an improved rate. Now, after 13 seasons in Carolina, Ward is an UFA, so this could be the end of his long run with the team.

Tom Wilson, RW, Washington Capitals (Week Nine): Wilson is still one tough-ass mofo, but after being moved to the top line in Washington with Evgeny Kuznetsov and Alex Ovechkin, he proved that his hands have uses other than pummeling people. One thing is not like the other two here, is it? Wilson came through with a career best 35 points while going +10, and is now feared as a goal scorer as well as a serious pugilist.

Now it’s your turn. Let us know in the comments below which Fantasy hockey waiver wire pickups helped you the most this season.

After ending November in a slump, Fiala has absolutely been on fire this month, getting points in all seven games (six goals, three assists). His +6 rating in December has him back to even. Through just 31 games, Fiala has already tripled his assist total from all of last season. In fact, since playing his first NHL game in 2014-15, he had accumulated five helpers in 60 games. In basically half the number of games this season, he has 15 helpers. Can you say breakout?

Ward has been off the charts good this month, especially lately, with a shutout Tuesday and just three goals allowed over his last three games — all wins. He now has a winning record, and should easily shatter last season’s total of 23 wins. There’s a reason Ward has been one of the week’s hottest pickups, but there’s still time to jump on his train if you need netminding assistance.

A change of scenery and an upgrade in linemates could do wonders for these players on your Fantasy team. If any are available on your league’s waiver wire, you might consider taking a chance on one.