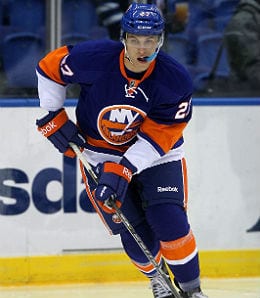 Since the All-Star Break, there has been no hotter team in the National Hockey League than the Minnesota Wild. Having improved from a mediocre 20-20-6 and 46 points to 28-20-7 and 63 points in nine games, it’s clear Fantasy owners should be jumping on the bandwagon with names like Zach Parise, Jason Pominville, Thomas Vanek, Mikko Koivu, Ryan Suter, Devan Dubnyk and others ready to be had at relatively reasonable prices on the trade market. Trust us, they’re worth checking out.

That said, it’s a bunch of New Yorkers making the list this week, and, for some decent scoring players, they can be had for nothing on the waiver wire.

Anders Lee, C/LW, New York Islanders (ESPN: 12.3 per cent; CBS: 44 per cent): For a guy with 18 goals, 28 points and a plus-11 rating in 50 games this season, Lee is widely available in the leagues above, and even more so in a Yahoo format in which he’s owned in just 15 per cent of leagues. In Week 18, he had three goals (see video below), eight points, a plus-6 rating, two penalty minutes, a power play point, a game-winning goal, 15 shots on goal, eight hits and a blocked shot. We suggest you jump on this guy if you’re in need of some scoring.

Kevin Hayes, C/RW, New York Rangers (ESPN: 3.2 per cent; CBS: 13 per cent): Hayes is one of many rookies having a quality debut. Through 51 games, he has 10 goals, 25 points and a plus-7 rating, good enough for eighth-best among NHL greenhorns and three points shy of seventh-leading rookie scorer Lee. The big (6’5″, 225-pound) forward had three goals, six points, a plus-6 rating, two penalty minutes, a shorthanded point, 11 shots on goal, 13 face-offs won, two hits and four blocks last week.

Josh Bailey, LW, New York Islanders (ESPN: 6.2 per cent; CBS: 33 per cent): It boggles our minds just how available some of these players are. In Week 18, Bailey had three goals, five points, a plus-5 rating, four penalty minutes, 10 shots on goal, a hit and two blocked shots. Through 44 games this season, he has 11 goals, 28 points and a plus-11 rating.

Dwight King, LW, Los Angeles Kings (ESPN: 0.5 per cent; CBS: 3 per cent): Are you in a league with 12 or more teams and in need of some secondary scoring options? King might be just the dark horse candidate you’re looking for. As a fourth line role player, he’s been pretty solid this season with 10 goals, 18 points and a minus-2 rating through 54 games played. In addition, he’s currently on a three-game point streak with three goals, five points, a plus-5 rating, 12 shots on goal and nine hits last week.

Carl Hagelin, LW, New York Rangers (ESPN: 5.3 per cent; CBS: 28 per cent): Hagelin is another New York player doing well this season. Through 54 games, the speedy Swede has 12 goals, 24 points and a plus-13 rating. In Week 18, he managed two goals, three points, a plus-4 rating, four penalty minutes, a shorthanded goal, a game-winning goal, 15 shots on goal, a hit and a blocked shot.

No. 1. Kari Lehtonen, G, Dallas Stars: Lehtonen hasn’t had the best of seasons, but he sure had a pretty good week with three wins, a 1.66 goals against average, a .957 save percentage and a shutout.

No. 2. Dustin Byfuglien, D/RW, Winnipeg Jets: It was a banner Week 18 for Byfuglien, who had two goals, seven points, a plus-2 rating, six penalty minutes, four power play points, a game-winning goal, 18 shots on goal, eight hits and two blocked shots. When you consider he’s a very versatile player in Fantasy leagues with dual defenseman/forward eligibility, is there anything this guy can’t do (aside from staying away from donuts, that is)?

No. 3. Marian Hossa, RW, Chicago Blackhawks: If you thought “Big Buff” had a great week – don’t worry, he did – but his former Blackhawks teammate, Hossa, beat him in goals with and points with seven biscuits in the basket, eight points, a plus-2 rating, three power play points, a game-winning goal, 13 shots on goal, two hits and a block. Someone should tell the 12-time 25-goal scorer he’s 36, because he sure isn’t playing like it.

No. 1. Semyon Varlamov, G, Colorado Avalanche: Varlamov did manage a win this week, but nothing else went right as he allowed 11 goals, a 3.81 goals against average and an .869 save percentage.

No. 2. Ryan Miller, G, Vancouver Canucks: Miller also notched a win and allowed one fewer goal than Varlamov, but posted a horrendous goals against average of 4.10 and an .867 save percentage. On Monday, he’s headed for his third showdown with the surging Wild in three weeks. Seeing as he hasn’t fared well in the previous two, we could be looking at either a similar outcome or one of his best games of the season as he looks to put the past behind him.

No. 3. Zdeno Chara, D, Boston Bruins: Chara has had an uncharacteristically poor season, scoring just three goals, 13 points and a minus-3 rating. In Week 18, the hulking rear guard was scoreless with a minus-6 rating, five shots on goal, five hits and three blocked shots.