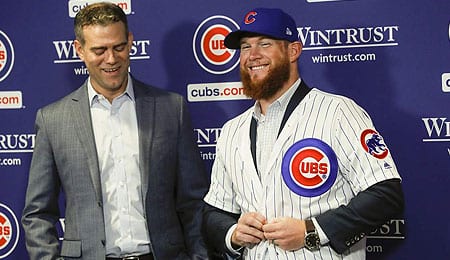 So now that Craig Kimbrel has finally found a new home, signing with the Cubs last week, how can we expect him to fare as the new closer at Wrigley?

Hell, even the best sportsbooks online are likely loathe to take a bet about how long a Cubs closer will stick around.

After all, this is a gig that has seen its fair share of talented arms in recent years, but really has been a revolving door. There was Mitch “Wild Thing” Williams; the very rotund Rod Beck; Carlos Marmol, whose control issues likely made even Wild Thing blush; LaTroy Hawkins, who famously stopped talking to the media in Chicago; the licorice-eating Turk Wendell; Aroldis Chapman; Randy Myers, who was superb, but had the misfortune to blow a save on the same day the team offered his poster as a giveaway; Kerry Wood, who found success as a closer after injuries derailed his starting career; Wade Davis; and Rick Aguilera, among others.

By addressing its biggest weakness, Chicago has definitely improved its chances of getting to the World Series. If nothing else, the Cubs themselves are stoked about this signing (see video below).

Kimbrel’s three-year deal (with an option for 2022) will pay him $43 million, but the seven-time All-Star isn’t quite ready to take the mound in anger considering he hasn’t pitched since last season. As we discussed in last week’s Wire Troll, he’s expected to be ready to pitch in the majors in about two and a half weeks, perhaps a bit sooner.

We know that when Kimbrel is on his game, he’s an elite closer, but when we last saw him in last year’s playoff run by Boston, he was shaky, recording a 5.91 ERA in the postseason. During the regular season, he was solid, but not nearly as effective as he’d been in 2017.

Kimbrel did match his career high in wins last year, but do you really want your closer earning wins? It usually means he blew a save in the same game. In fact, his five blown saves last year was the second highest total of his career.

Kimbrel’s first five seasons — all with Atlanta — were among his most consistently dominant, although he probably had his greatest season ever in 2017 with the BoSox.

Last year, Kimbrel continued to post an elite K rate, but his walk rate regressed after he showed such improvement in that regard in 2017. After setting a career high with a 93.9 per cent strand rate in 2017, that dipped to 83 per cent last year, more in line with his career norm.

Still, the reduction in his command last season is something to watch this year — especially early on as he tries to shake off the rust. Kimbrel’s always had unhittable stuff, but if these command issues get any worse, it could hurt him.

Traditionally a groundball pitcher, he skewed into more of a flyball hurler in Boston, and this is something to watch in the sometimes not-so-friendly-to-pitchers confines of Wrigley Field.

From a Fantasy perspective, Steve Cishek has just had the rug pulled out from him. Pedro Strop can also be sent packing, had you been holding onto him.

As for Kimbrel, by the time he’s ready to return, he should garner 20 or more save chances over the remainder of the season, and will likely convert nearly all of them — think 18-21 saves — with his usual solid ERA, WHIP and K numbers.

Italian prog rockers Delirium originally formed in 1969, sticking around until the mid-’70s and then reuniting in the early 2000s. The band’s biggest hit is “Jesahel,” released in 1972. Here’s the B-side, “King’s Road.”

Now it’s your turn. Let us know in the comments below how you think Kimbrel will fare with the Cubs.

By RotoRob
Tags: Craig Kimbrel
Posted in BASEBALL, RotoRob, Transactional analysis | Comments Off on What to Expect From Craig Kimbrel as the Cubs Closer

While it’s true that he is human and will occasionally turn a situation sticky, he remains perfect in save chances early on this year. Okay, so if you want to call his ERA rising two-tenths of a run last year alarming, go ahead. You’re probably also a germaphobe. There aren’t many hurlers that can blow hitters away with such ease as Kimbrel can. Let’s see… 900 hitters have now faced him since he arrived in the majors and he’s struck out 392 of them (44 per cent). What do you think? Kimbrel has been the clear No. 1 on this list for a couple of years now and considering how tough it is to take him yard, we don’t see him going anywhere as long as he’s healthy.

Kipnis was one of the main reasons why the Indians went from AL Central basement dwellers to finishing a game behind the Tigers for the division title. The 26-year-old quietly had a good year, showing the ability to hit for average and power, drive in some runs, get on base at a good clip, and steal 30 bags. Some owners might find Kipnis to be a better bang for their buck than Cano as you won’t need to use a first round pick on him. As Kipnis enters his fourth big league season, he could be sitting on a breakout year. His ability to steal bases and his power potential make him one of the elite keystone corner dudes in the game. If Kipnis is able to hit over 20 long balls this year, and it’s very possible, come next year, we could see him at the top of this list.

He was a workhorse last year, and even though his WHIP rose slightly, he was able to cut his ERA by giving up just one freaking homer all season long. Mr. Stingy doesn’t like when fans get a souvenir, apparently. Bell’s strikeout rate has risen the past two years, something Fantasy owners aren’t likely to complain about, but it’s also meant that it’s taking him longer to get through innings, and that’s something that could take a toll down the stretch. As good as Bell has been as a closer, he’s someone that could be traded and wind up in a less significant role on a contender. Food for thought.