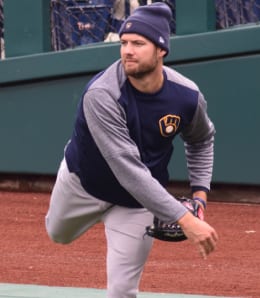 Welcome back to another week of Fantasy baseball. We’re past the halfway mark of August now, so with just a few weeks left to go in the season, there’s no time to let up. Work the wire!

This week, Yu Darvish became just the second pitcher to record four straight starts of at least eight Ks with zero walks; Pete Alonso tied the NL record for homers by a rookie with his 39th jack; and Cody Bellinger became the first player in the majors to reach 40 long balls this season.

Adrian Houser, RP/SP, Milwaukee Brewers (ESPN: 1.8 per cent; CBS: 9 per cent): Since returning to the rotation at the end of last month, Houser has looked extremely sharp in three of his last four starts, including a 10-K performance over six innings last Saturday to earn his fifth win of the season. On Friday, he went a career high seven innings and then talked about how dialed in he is currently (see video below). Houser’s K rate has taken a huge step forward this year, and while neither his record nor his ERA is great, there is a lot to like here, especially if you’re seeking a streaming option. He doesn’t offer a ton of upside, but he deserves your attention while he’s starting, especially considering how dominant the 2011 second rounder looked in the rotation at Triple-A to begin the year.

Ivan Nova, SP, Chicago White Sox (ESPN: 10.1 per cent; CBS: 38 per cent): Nova is as hot as any hurler right now, recording a 4-0 record and an ERA of 0.49 with a pair of complete games over his last five starts. Why didn’t any contender want him at the deadline? Strange stuff. At any rate, Nova’s gotten better and better as the season has progressed, and he’s been rather durable the past few years. Hell, he’s even shutting down top teams like Houston (two wins, three earned runs allowed in 16 IP). Pick up Nova and see if he keeps this rolling down the stretch.

Adam Haseley, OF, Philadelphia Phillies (ESPN: 0.5 per cent; CBS: 5 per cent): Haseley was recalled after Andrew McCutchen was lost for the season. While Haseley has cooled off a tad lately, he has hits in back-to-back games and swiped his first bag of the season on Thursday. This was significant as the Phils’ 2017 first rounder had showed modest speed in the minors, but this was the first sign of it in the bigs. Haseley’s strikeouts are worrisome, but judging by his minor league track record, he has a chance to be a real asset in OBP leagues.

Mychal Givens, RP, Baltimore Orioles (ESPN: 15.8 per cent; CBS: 16 per cent): Givens’ WHIP keeps rising since that breakout season in 2017, yet he’s worked his way into the closer gig regardless. Homers have been a huge issue for him this year, but if you desperately need saves, give him a look.

Logan Webb, SP, San Francisco Giants (ESPN: 0.2 per cent; CBS: 2 per cent): Webb is scheduled to make his MLB debut on Saturday against Arizona. You may recall that he was tearing through the Giants system before getting dinged with an 80-game PED suspension. Well, Webb is back now, and given how dominant he looked over four minor league levels, we’re curious about what he can do in the bigs. This 22-year-old has a chance to be a special pitcher for the surprising Giants.

Sean Manaea, SP, Oakland Athletics (ESPN: 6.7 per cent; CBS: 33 per cent): Manaea will be activated off the IL very shortly after missing nearly a full year following shoulder surgery. His workload increased every season before getting hurt as he showed signs of becoming a hurler capable of pitching deep into his starts. Manaea’s had some hiccups in his recovery, so the A’s will likely ease him back, but you cannot ignore this dude.

Kevin Gausman, SP, Cincinnati Reds (ESPN: 31.8 per cent; CBS: 24 per cent): Gausman was surprisingly waived by the Braves, landing on the Reds. But instead of putting him in the rotation, Cincy is trying him as a multi-inning reliever. It’s an idea so crazy it just might work! The decrease in workload will affect Gausman’s value, but if he can turn things around, it’ll be worth it. We’re very interested to see how this plays out.

Mike Yastrzemski, OF, San Francisco Giants (ESPN: 10.9 per cent; CBS: 37 per cent): Carl’s grandson is proving he can hit as well, bashing three dingers on Friday, giving him five jacks in the last four games and six in the last seven. Yastrzemski isn’t exactly a prospect (he turns 29 next week), but he’s making the most of his rookie season, showing he can hit well enough to stick around the Show for a while.

Queen formed in London in 1970, and is still going at it today, nearly 50 years later. In 1975, the band released its fifth album, A Day at the Races, which included the lead single “Somebody to Love.” The B-side to that was “White Man.”

By RotoRob
Tags: Adrian Houser
This entry was posted on Saturday, August 17th, 2019 at 3:25 pm and is filed under BASEBALL, RotoRob, The Wire Troll. You can follow any responses to this entry through the RSS 2.0 feed. Both comments and pings are currently closed.