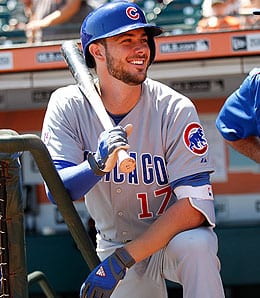 Kris Bryant had plenty of reasons to smile after his brilliant season. (Whiskey Riff)

Welcome back to another of our 2016 Fantasy baseball cheat sheets. Now that we’re into the offseason, we enter the “review” period of the season, while beginning to make plans for 2017. So these rankings represent our view of the landscape at third base as of the end of the 2016 season… with an eye towards 2017 (but, in most cases, without the assistance of knowing how players’ roles or homes may change). Much can happen between now and then, and even a great casino like Bodog Sports probably would have a tough time predicting how things are going to play out this offseason.

Note as well that all of these players qualified at third base for 2016; they may not all remain qualified at the position for 2017, so be sure to check your individual league eligibility rules.

Need a third baseman for your Fantasy baseball team this offseason? While you wonder whether adding Wade Davis will improve the Cubs’ chances of repeating, we look at the top 45 players at the position as of the end of the 2016 season. Special thanks to JB (@JBsFantasyHelp) for his excellent work with the rankings.

Third base saw some changes this year, thanks to some nice young talent joining the ranks as well as some established players earning qualification. Look at some of the newbies this year — Daniel Murphy, Jonathan Villar and Eduardo Nunez all qualified at the hot corner for 2016, while youngsters like Miguel Sano, Ryon Healy and Hernan Perez started to make their mark. Old standbys stepped up: Kyle Seager showed he’s a more complete player; Adrian Beltre still has plenty left in the tank; Maikel Franco took a huge step forward early before fading; and youngster Nicholas Castellanos also made nice strides before getting hurt.

This is no longer a shallow position as it was heading into the 2015 season, and thanks to some nice surprises (Villar and Nunez, we’re looking at you), there’s a lot more depth here as we begin to think about 2017.

1. Kris Bryant, Chicago Cubs (17): This massive man-child stayed healthier last year, improving his numbers nearly across the board en route to his first MVP trophy. What is Bryant’s power prime going to look like? Hell, he’s such a celebrity now that he’s been on Jimmy Kimmel Live, but sorry ladies, he’s getting married soon (see video below). He also qualifies at Outfield.

2. Nolan Arenado, Colorado Rockies (4): Baseball-Reference suggests that Arenado, at this current age, most similarly compares to Scott Rolen. Imagine him having a Rolen-like career without the injuries and with the benefit of Coors Field. Arenado is a franchise player already.

4. Josh Donaldson, Toronto Blue Jays (1): Voted Toronto’s best player in 2016, Donaldson had another MVP-type effort and has proved extraordinarily durable, although his extra-base pop was down a smidge this year.

6. Kyle Seager, Seattle Mariners (6): Seager turned in his first 30-homer campaign in what was easily the finest effort of his career.

7. Matt Carpenter, St. Louis Cardinals (12): For Carpenter’s profile, see our Second Base Rankings. He also qualifies at First Base.

8. Daniel Murphy, Washington Nationals (13 at 2B): For Murphy’s profile, see our Second Base Rankings. Murphy also qualifies at First Base

9. Adrian Beltre, Texas Rangers (2): Beltre turned in another amazing season both on offense and on the field. He’s now just 58 hits shy of the magical 3,000 mark for his career.

11. Evan Longoria, Tampa Bay Rays (5): Longoria was again very healthy last year as he has been in recent seasons, but it’s a surprise to see him most compared to Geoff Jenkins on Baseball-Reference.com. Anyone else shocked by that?

12. Todd Frazier, Chicago White Sox (3): The Homer Derby champ from 2015 has been very durable and in moving to the AL last year, pounded 40 long bombs for the first time. He also enjoyed a nice season on the basepaths, but his BA took a beating.

13. Alex Bregman, Houston Astros (NR): Part of the young core the Astros have built that has them perhaps one veteran from contention, Bregman actually upped his walk rate in Houston over what he had done in Triple-A — a fantastic sign for a young player. The upside here is tremendous.

14. Jose Ramirez, Cleveland Indians (26 at SS): For Ramirez’s profile, see our Shortstop Rankings. He’s also listed in our Second Base Rankings and qualifies at Outfield.

15. Justin Turner, Free agent (45): We recommended Turner as a waiver wire pickup in June last year, and it was a great call as he raked to the tune of a .330 mark that month and then hit even better in July before cooling. In 2016, he built on that with his most productive campaign.

16. Miguel Sano, Minnesota Twins (NR): By cutting Trevor Plouffe, the Twins have opened up the hot corner for Sano, who didn’t really have a full-time home on the field last year. If Sano stays healthy, expect him to make a run at 35 homers in 2017. Sano also qualifies at Outfield.

17. Maikel Franco, Philadelphia Phillies (44): Franco broke through for a career high in homers last year, but his walk rate and BA went south.

19. Jake Lamb, Arizona Diamondbacks (32): Could Lamb be dealt to the Yankees as some rumours suggest? If he could combine 2016’s power with 2015’s hitting, we’d really be onto something here.

Goldy’s home run power has waned so far this season and he’s not molesting lefties the way he usually does.

Glasnow, a towering righty the Pirates nabbed in the fifth round in 2011, has surged into our top 10 this year after proving he can win at Double-A and then posting an even better ERA after a promotion to Triple-A in 2015. He’s only been taken yard 20 times in five professional seasons (including this year) while maintaining a lifetime BAA under .180. Really?!? All the while, Glasnow has racked up the punchouts, averaging 11.69 K/9 since being drafted out of a California high school. Best of all, he’s been durable, and it’s clear based on the consolidation of his superb Triple-A results this year that he’s ready for the majors as soon as Pittsburgh needs help. The only worry is his control, but he’s made strides in that regard this season as well.