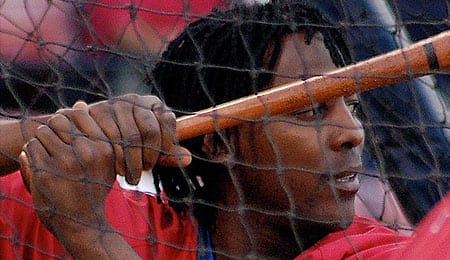 We’re expecting Vladimir Guerrero to bounce back somewhat now that he’s in Texas.

We’re back with more of the 2010 RotoRob MLB Draft Kit with the release of another cheat sheet. While Francisco Rodriguez deals with a family emergency, let’s take a look at the top designated hitter options.

Don’t forget about these players, who sometimes fall through the cracks on your cheat sheets. Just because they don’t fit anywhere else doesn’t mean they don’t have value; however, make sure you understand they are locked in to your DH spot, so if you grab one of these dudes, you may need some position flexibility elsewhere.

1. David Ortiz, Boston Red Sox (1): Despite the fact that Ortiz stayed healthy for the most part last season, he really struggled for a good chunk of the year. His extra-base pop declined for the third straight season, his batting eye really weakened, and it’s not as if Big Papi has any speed. Through the end of May, he had shockingly only managed one home run, prompting Red Sox Nation to call for his benching. Fortunately, Ortiz turned things around, smacking 27 dingers from June on, so let’s not throw dirt on his grave just yet. Expect him to get back to his customary 30 homer, 100 RBI range this season.

2. Vladimir Guerrero, Texas Rangers (12 at OF): Vlad the Impaler is getting on in years and has become a major injury risk, but Texas is a great place for him to land, and he should help the Ranger offense bounce back. Limited to 100 games because of injuries last year, Guerrero endured his lowest home run total since his rookie year and was quite unproductive. He failed to bat .300 for the first time in his career, but it’s reasonable to expect him to bounce back as the new clean-up hitter in Texas.

3. Hideki Matsui, Los Angeles Angels (52 at OF): With Vladdy leaving for the Rangers, the Angels signed Matsui to take his place. Godzilla’s knees are still a concern, but he should be okay this season. Last year, Matsui enjoyed a fine bounce back, reaching 90 RBI for the fifth time since coming over from Japan. He struck out more often, but more than made up for it by increasing his walk rate even more. Matsui never had much speed, but because of his knees whatever he had is now gone. Still, the 2009 World Series MVP should provide a nice power boost for the Halos, not to mention how valuable his winning experience will be for this team.

4. Pat Burrell, Tampa Bay Rays (39 at OF): Burrell ranked as a top 40 outfielder a year ago, but after playing just two games in the outfield during a dreadful 2009 season, his value has not only plummeted, but it’s been severely restricted because of the positional inflexibility. Herniated discs in his neck dogged Burrell all season long, resulting in his lowest run total ever and a decreased walk rate that sent his OBP plummeting. The Phils let him walk away after winning the World Series in 2008, not even offering him arbitration, and now they look pretty smart for doing so.

5. Jim Thome, Minnesota Twins (2): It’s a good thing Thome’s back in the AL, because he’s not much of a pinch hitter and hasn’t played an inning defensively since 2007. Some minor aches and pains, Interleague play and ultimately a move to the NL, where he only came off the bench conspired to limit Thome’s action, thereby brining his run and hit totals down. Worse yet, his extra-base pop continues to decline and obviously he has no speed at all. So let’s see, an aging slugger with slug-like speed who can’t slug any more. Sound good to you?

6. Andruw Jones, Chicago White Sox (NR): Jones was a serious bust in 2008, and he didn’t exactly burst back in 2009. Still, there were some good signs. His extra-base pop was at its best since 2006 and he enjoyed his highest walk rate ever. Hell, Jones even pitched in with a few steals, but realistically, it’s been almost a decade since this was a big part of his game. Jones will DH against lefties (and possibly emerge with the FT gig) this season, and could find himself seeing some more action in the outfield. If he gets his 20 games, he could be somewhat valuable.

7. Randy Ruiz, Toronto Blue Jays (NR): Ruiz was a Wire Troll recommendation in mid-August, and it was a wise one as he had a strong August followed by a very big September and October. He saw more action last year and looked very strong in his limited time with the Jays, displaying fantastic power. Ruiz’s walk rate dipped, but he also reduced his strikeouts. This spring he’s gunning for a bench job (and role he’s probably clinched) with Toronto and at this point is probably best employed as an in-season pickup.

8. Ken Griffey Jr., Seattle Mariners (80 at OF): It’s troubling to watch this former defensive whiz reduced to a DH role. Hopefully the weight he lost this offseason will help Griffey rebound from his worst season ever. While his extra-base pop bounced back a bit last year, it’s nowhere near where it used to be. Griffey cut his strikeouts, but has absolutely no speed anymore – another reason he so rarely dusts off his glove. Griffey’s OPS last season was 735. For perspective, consider that his career mark is well above 900. How the mighty have fallen. Let’s hope for the sake of history that he can squeeze one more decent season out of his 40-year-old body before ‘The Kid’ hangs ‘em up.

9. Travis Hafner, Cleveland Indians (4): We ranked Hafner fourth in last year’s DH rankings, suggesting he had hit rock bottom. Well, we right, as Pronk bounced back in 2009 – somewhat. His extra-base power and OBP rebounded, but are still nowhere near what he used to be capable of. Small wonder that Hafner is lasting until the 19th round of AL-only drafts this spring. Let’s face it, we’re talking about a plodding, injury-prone dude who doesn’t play the field and somehow who despite adding almost 200 points of OPS last season was still miles from the numbers he was racking up in his prime. The Pronk era is over.

Catcher
First Base
Second Base
Shortstop
Third base
Outfield

By RotoRob
Tags: MLB
This entry was posted on Sunday, April 4th, 2010 at 4:01 pm and is filed under 2010 RotoRob MLB Draft Kit, BASEBALL, Cheat sheets, RotoRob, Tim McLeod. You can follow any responses to this entry through the RSS 2.0 feed. Both comments and pings are currently closed.