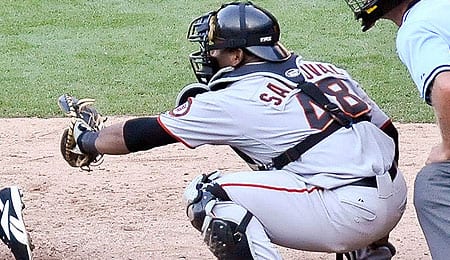 His days of catching are unfortunately over, but Pablo Sandoval still qualifies at the corners.

Finally, we’re back with more of the 2010 RotoRob MLB Draft Kit and the serious push is now on. While you consider Dwight Gooden’s most recent indiscretion, let’s check out the top third basemen in the game.

This is a position that quickly gets very ugly. After the top five or six, you start to get into some risky plays, so the hot corner is not a position we’re thrilled with this year. The key takeaway here is that if you don’t get a stud, don’t overspend.

Previous rankings are in parenthesis.

1. Alex Rodriguez, New York Yankees (4): A-Rod missed 38 games last year, yet still reached 30 homers and 100 RBI for the 12th straight time. He was a more patient hitter than ever last season, and it even paid off with him finally exorcising his playoff demons. Hell, the dude is even porking Cameron Diaz now. Life’s good on top.

3. Ryan Zimmerman, Washington Nationals (8): Zimmerman stayed healthy last year and put up a career season along the way. He had a career high in runs scored and averaged a long ball every 18.5 at bats – a massive increase on his previous high. He’s been going in the third round in recent mocks.

4. Kevin Youkilis, Boston Red Sox (NR at 3B; 9 among 1B): You can read about Youkilis in our first base rankings.

5. David Wright, New York Mets (1): Wright was the biggest bust in all of Fantasy baseball last season. Yes, injuries limited the normally durable Wright to his fewest at bats in a full season, but where the hell did his power stroke go? Throw in way more Ks and less walks, and you can see how Wright ruined many a Fantasy owner’s season. Obviously, Wright remains a key part of the Mets, and he’s expected to bounce back big time this year, so on the plus side, he may never come cheaper.

6. Mark Reynolds, Arizona Diamondbacks (17): We already discussed Reynolds in our first base rankings.

8. Aramis Ramirez, Chicago Cubs (2): As a second round pick in 2009 drafts, Ramirez really killed a lot of owners as shoulder problems cost him almost half the season. His power dipped, and there’s obviously concern that it may never come back to the levels we’re accustomed to. However, when he was in the lineup, Ramirez remained extremely productive, recording his fifth 900 OPS season in the last six years. His batting eye slipped a bit, but if you’re looking for reason to be optimistic, consider that Ramirez will be highly motivated as he can opt out of his deal after the season.

9. Chone Figgins, Seattle Mariners (6): Figgins stayed healthy last year and his extra-base pop bounced back nicely. More importantly, he took a more patient approach than ever before, setting a career high in OBP, which is what he needs to be truly successful as an offensive table setter. The Angels are really going to miss this sparkplug, but Figgins should be a perfect match in Seattle, where the spacious nature of the park is well-suited to speedsters. Yes, stolen bases are plentiful in this year’s draft, but Figgins remains one of the most dependable sources of them.

10. Gordon Beckham, Chicago White Sox (NR): Beckham, who is going around the eighth round of most drafts, is likely ready to take another step forward this year – at least he better be for the sake of the White Sox offense. He was an average third baseman last season, and will now shift over to the keystone corner, begging the question of how long it will take him to adjust to the move.

11. Michael Young, Texas Rangers (12): The normally durable Young got hurt last season, playing in his fewest games since he was a rookie, yet Texas managed to remain in the race until fairly late in the season. This former Gold Glove shortstop resisted moving to third base at first, but has now settled in at the hot corner, enjoying one of his finest offensive seasons ever. Young cut his strikeout rate, and will again be a fixture in what is a very potent-looking top half of the Ranger batting order.

12. Adrian Beltre, Boston Red Sox (7): After Beltre suffered through an injury-riddled season during which his extra-base pop and walk rate reached new lows and his BA slipped for the second straight year, Seattle said see ya. The Red Sox swooped in and time will tell whether they got a bargain or an albatross, but remember that in five years in Seattle and its pitching-friendly park, Beltre still swatted over 100 home runs, and that’s counting his crappy 2009 season in which he failed to reach double digit bombs.

13. Jorge Cantu, Florida Marlins (13): The question of whether Cantu can build on his second career 100-RBI season is a valid one, one we tackled recently. While he missed some time with dizziness, Cantu was still very productive and his walk rate also rebounded. After splitting time at the corner positions in 2009, Cantu will play exclusively at the hot corner this season, opening the door at first base for a couple of Marlin prospects to slug it out. However, he is also listed in our first rankings as he’ll qualify there for 2010.

14. Chipper Jones, Atlanta Braves (5): Jones played 15 more games in 2009 than he did in 2008, yet he scored less runs. Of course, losing 100 points in BA will do that to you. To make matters worse, Chipper suffered through his worst power year ever. However, there is reason for some optimism. If Troy Glaus is healthy, he’ll offer a big right-handed stick to protect Jones in the lineup and Chipper believes he’s solved whatever the mechanical flaw was that caused his horrible slump over the final few months of last season.

15. Casey Blake, Los Angeles Dodgers (16): Although the cost was steep (Carlos Santana was sent to Cleveland in the deal), Blake’s arrival in LA reportedly helped address chemistry issues with the Dodgers. Last season, injuries cost Blake some time, and his extra-base pop slipped as a result of his hamstring woes. However, he reached the .280 mark in BA for just the second time in his career, and that helped offset his power slippage to an extent.

16. Kevin Kouzmanoff, Oakland Athletics (14): Kouzmanoff’s BA has been declining for a couple of seasons, and his power has slipped every season he’s been in the majors. Discussed in many trade rumours this offseason, Kouzmanoff was finally dealt to the A’s – another weak offense that shouldn’t help his run totals. He simply isn’t showing any development as a hitter and it’s not as if he has any speed. Don’t expect much if any improvement from Kouzmanoff and you won’t be disappointed; if he does finally break out, it will be a pleasant surprise.

17. Ian Stewart, Colorado Rockies (60 at OF): We already discussed Stewart in our second base rankings.

18. Alex Gordon, Kansas City Royals (10): In 2009, Gordon again failed to live up to his billing as the second overall pick in 2005, as hip surgery cost him most of the season and his extra-base power slipped. On the plus side, he stole bases more frequently, but that’s not what we’re waiting for here. In a strange move (are there any other kind in KC?), the Royals added Josh Fields this offseason, and while the team is committed to Gordon, perhaps this move will light a fire under him. Or perhaps the team is simply collecting failed third base prospects. Either way, at 26, Gordon needs to deliver on his promise this season…or else.

19. Mark DeRosa, San Francisco Giants (57 in OF): DeRosa was not having a great year for the Indians (his extra-base pop had dipped, but he was getting plenty of ribbies thanks to a nice .271 mark with runners on base), and then he struggled even more after being dealt to the Cards. Despite DeRosa’s substandard year, he landed a two-year contract with offensively-desperate San Francisco. He’s expected to play LF for the Giants, but as usual, should see action all over the diamond, which tends to be his saving grace as far as Fantasy value goes. DeRosa is also listed in our OF rankings.

21. Brandon Inge, Detroit Tigers (26): Inge may be considered a fine role model, but he’s pretty much a one-trick pony (power). Last season, his strikeout rate soared, his walk rate dipped, and he was horrible on the basepaths. Yet somehow, Inge’s BA was up (that’s not saying much), and he enjoyed his best season since 2006. Coming off two knee surgeries, Inge is ahead of schedule, but may be limited to DH duties at the very beginning of the season.

22. Casey McGehee, Milwaukee Brewers (34): We already discussed McGehee in our second base rankings.

23. Chase Headley, San Diego Padres (93 at OF): Headley didn’t exactly light the world on fire last season, but he did increase his walk rate and reached double digits in steals. Perhaps a shift back to his natural position at the hot corner will get Headley going offensively, and if he winds up batting behind 40-homer man Adrian Gonzalez, he could be a big-time sleeper. Headley is also listed in our OF rankings.

24. Mike Lowell, Boston Red Sox (19): Lowell saw a bit more action last year, but he’s been quite brittle in recent years and is already dealing with a thumb problem this spring. His production dipped ever so slightly, but Lowell made up for it with a rebound in batting average. The Sox tried to peddle him to Texas this winter, but Lowell is back in Beantown for a fifth season.

25. Scott Rolen, Cincinnati Reds (24): The Phillies haven’t been the same at third base since Rolen was traded in 2002; unfortunately, he hasn’t really been the same either, managing just a few solid seasons since. Rolen seems to have morphed into a first-half player in recent years, so if he gets off to another good start, you should look to deal him before his swoon begins. Last year was a mixed bag for the veteran; he had his most at-bats and hits since 2006, but his walk rate slipped. He enjoyed the second highest average of his career, but his extra-base pop was way down. Rolen is no longer much of a threat on the basepaths, having failed to reach double digits in swipes since 2003. The Reds and Rolen’s Fantasy owners could really use a full season out of him, but the last time he eclipsed 142 games was 2003, so let’s keep our expectations in check.

By RotoRob
Tags: 2010 MLB Draft Kit
This entry was posted on Friday, March 26th, 2010 at 9:51 am and is filed under 2010 RotoRob MLB Draft Kit, BASEBALL, Cheat sheets, RotoRob, Tim McLeod. You can follow any responses to this entry through the RSS 2.0 feed. Both comments and pings are currently closed.