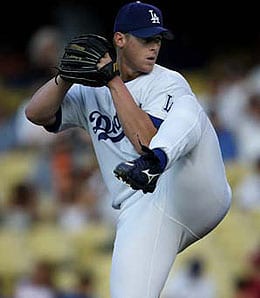 Note that this is a forward-looking list; we have tried to project how we think these hurlers will perform from this point on in 2009. Each player’s previous ranking is in parentheses.

1. Roy Halladay, Toronto Blue Jays (12): There are concerns about the groin injury, but it sounds minor. He’s been a bit more hittable this season, yet still leads the bigs in wins.

2. Tim Lincecum, San Francisco Giants (30): Lincecum has also been a bit more hittable so far this season, but he remains as dominant as they come. Is he headed towards back-to-back Cy Youngs? Ironically, the last NL pitcher to do it was Lincecum’s rotation mate Randy Johnson, who won four straight between 1999 and 2002.

3. C.C. Sabathia, New York Yankees (5): Yes, he’s a notoriously slow starter, but despite pitching half his games in the homer-haven that is new Yankee Stadium, Sabathia is headed for another big win total. In fact, he’s probably one of just a couple of current pitchers who retains an outside shot of one day reaching 300 wins. Either way, the Yankees are counting on this horse to lead the way on a staff that’s been having problems.

4. Chad Billingsley, Los Angeles Dodgers (35): Billingsley, now the Dodgers’ ace, has shown improvement this year by reducing his hit rates. One concern I have, however, is that his PPA has risen, meaning he won’t quite be able to work as deep into games as you’d hope. So far, that hasn’t hurt him, but it could be a factor.

5. Johan Santana, New York Mets (1): Santana got off to a brilliant start, but he’s looked quite human since, getting battered by the Yanks recently for the worst start of his career. The bottom line is, he’s giving up a few more baserunners than normal, but he’s still among the best in the biz. The Mets think they’ve identified a mechanical flaw that’s caused Santana’s recent struggles, but it’s still too early to tell if this will force him back up the rankings.

6. Zack Greinke, Kansas City Royals (60): Greinke has taken another step forward this year, enjoying another big increase in his strikeout rate and putting in a strong enough early-season effort to make it onto our early All-Star team. What concerns me is the amount of complete games he’s tossed already (five after totalling three in his first five big league seasons) and the pace he’s on as far as innings pitched goes. Sure, no one wants to hand a lead off to the Royals’ relievers, but is Greinke’s right arm going to hold up at this pace?

7. Dan Haren, Arizona Diamondbacks (10): Haren’s had another amazing start, and no starter in baseball has been harder to hit. He’s upped his K/9 rate slightly from last season’s career best, but unfortunately, Haren’s win total has been restricted by a weak Diamondback bullpen. Regardless, he’s enjoying a career year so far, culminating in a nod on our early-season All-Star team, but do be aware that he’s struggled in the second half of recent seasons. Right now, Haren is showing no signs of letting up, but because of his past, he’s an awesome sell-high candidate.

8. Josh Beckett, Boston Red Sox (6): Beckett had an awful start to his season, but up until his last start, he’s been cruising since the calendar flipped to May. His overall numbers and K/9 are down slightly, but again, given the roll he’s been on, there’s nothing to worry about from Beckett. Hell, he even went yard in a recent start.

9. Matt Cain, San Francisco Giants (23): Cain just keeps shooting up the rankings thanks to his improved hit rates. His command has slipped slightly the past couple of seasons, but if you look at his recent work, there’s been absolutely nothing wrong with how sharp he’s been. Back in Spring Training, we wondered if he’d finally get the run support he needed, and the answer is a resounding “yes.” The Giants have supplied Cain with almost three more runs per game over last season, and that’s why it’s only mid-June, yet he already has more wins than he had in either of the past two seasons. Cain could arguably be the best pitcher in the National League right now, and if this keeps up, he’ll be in the top five very shortly.

10. Cole Hamels, Philadephia Phillies (15): Okay, Hamels hasn’t exactly pitched like he did during his World Series MVP performance last year — I’m especially worried about all the dingers he’s coughed up — but after a shitty start, which included an ankle injury, he’s gotten better as the season has progressed, so he should be good to go from here on out.

11. Justin Verlander, Detroit Tigers (9): Verlander also endured a sluggish start, but he’s been absolutely sick since late-April. He’s never been harder to hit, and he just keeps getting stingier with the long ball even though he’s giving up more flyballs than ever before. That’ll give you some idea of how sharp Verlander has been as he heads towards a career year that includes a massive hike in his K/9 to personal-best levels.

12. Felix Hernandez, Seattle Mariners (13): King Felix just keeps getting better, and at the tender age of 23, you have to wonder just how high is this dude’s upside. His K rate has shot up to a new personal high and that’s helped his command rebound after a stumble in 2008. How good has Hernandez been lately? Well, until his last start, it had been over a month since the last time he surrendered more than one earned run in a start. Ya, I suppose he’s not bad.

13. Cliff Lee, Cleveland Indians (NR): We all knew that Lee wouldn’t be able to duplicate his ridiculously sublime 2008 Cy Young effort, but he hasn’t been too far off. He’s actually giving up less home runs, but all his other indicators are headed in the wrong direction: more walks, less strikeouts and a hit rate that has never been higher in his entire career. On the plus side, Lee has been getting better and better as the season progresses, so we don’t recommend selling low on him.

14. James Shields, Tampa Bay Rays (26): Shields keeps lowering his long ball rate, but his lack of overall consistency has resulted in far fewer wins at this stage of the season than you’d expect. We expressed concern about his hit rates last August, and it’s been even worse this season, yet a look at his ERA tells you he must be doing something right. Right?

15. Josh Johnson, Florida Marlins (NR): Johnson is absolutely rolling now, and now that he’s finally healthy, the Marlins are allowing him to throw more pitches per start. And hell, why not? The dude has never been harder to hit. We liked him when he came off the DL last season, and he’s continued to prove us right since then.

16. Jered Weaver, Los Angeles Angels (50): Weaver has finally started putting up the results to match the hype that surrounded him when he first burst onto the scene back in 2006. He’s been healthy this season, and is on pace to smash his previous career high in innings pitched, and that’s definitely something we’d recommend monitoring in the second half. Weaver has improved his control, offsetting a slight reduction in K/9 as he continues to trend even further towards extreme flyball tendencies.

17. Jair Jurrjens, Atlanta Braves (NR): Jurrjens had a superb start to the season, but he’s come back to earth since. While his control is slightly better this year, he’s been rather unlucky lately, suffering from a lack of run support that’s left him with a mediocre record. Jurrjens deserves a better fate, but I’m not sure he’s headed in that direction given his season trends.

18. Aaron Harang, Cincinnati Reds (18): Harang has bounced back impressively after a horrid 2008 season. His control is much improved, but his K/9 has dipped slightly. Still, he’s already just one win shy of matching his total from all of last season, and with a bit of luck, he would be there already.

19. Edwin Jackson, Detroit Tigers (NR): Jackson’s K rate has rebounded after a big dropoff in 2008 and he’s been very consistent so far this year. We identified him as enjoying a breakout early, and he’s done nothing to convince us differently since. In fact, Jackson has been absolutely rolling recently, going 5-1, 1.61 in his last seven starts.

23. Derek Lowe, Atlanta Braves (42): Lowe’s command hasn’t been nearly as good as it was last year, and he’s gotten progressively worse results as the season has grown older. I called him a sell-high candidate last month, and it’s possible I may have been bang on, as just two of his five subsequent starts have been solid.

26. Javier Vazquez, Atlanta Braves (19): Harder to hit than ever before.

31. Erik Bedard, Seattle Mariners (7): Was looking great, but back on DL again.

35. Edinson Volquez, Cincinnati Reds (NR): Many scoffed when we put him on our 2009 busts list.

37. Scott Kazmir, Tampa Bay Rays (14): Was getting hammered before landing on DL.

40. John Lackey, Los Angeles Angels (4): Had at least been limiting the HRs until recently.

41. Ryan Dempster, Chicago Cubs (NR): The long balls have been a problem, but are improving.

48. Francisco Liriano, Minnesota Twins (58): Control has been an issue as he struggles to rediscover his pre-injury form.

By RotoRob
Tags: Roy Halladay, Toronto Blue Jays
This entry was posted on Monday, June 22nd, 2009 at 12:00 pm and is filed under BASEBALL, Cheat sheets, RotoRob, Tim McLeod. You can follow any responses to this entry through the RSS 2.0 feed. Both comments and pings are currently closed.