Can the Rangers Take the Next Step? 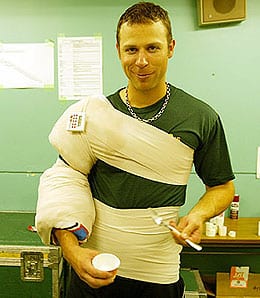 Last week, we examined the Angels’ chances of winning a fourth straight AL West title, and determined that with the teams below them closing the gap, things are going to be tougher this year.

One of those teams is the Texas Rangers, who have played bridesmaid in the AL West for the past two years. Do they have what it takes to get over that hump and win their first division title since 1999? Let’s take a closer look.

One of the big problems with the Rangers in 2009 was their offense. After leading the AL in OPS in 2008, Texas slumped to seventh last year, and injuries that limited Josh Hamilton to 89 games was a big factor. That’s why it’s so disconcerting that Hamilton is already dealing with a shoulder problem this spring. He’s only day-to-day and it doesn’t sound serious, but if Texas has any designs on reaching the playoffs, it will need the injury-prone outfielder (who has reached as many as 90 games once in three years) to perform more like the 2008 version of himself rather than a repeat of last year’s disappointment.

Another key for Texas is Rich Harden, signed as a free agent to replace the staff’s “ace” Kevin Millwood, dealt to Baltimore in December for reliever Chris Ray and a minor leaguer. We all know about Harden’s talent, but know even more about his injury history. Hell, if we call Hamilton injury-prone, how do we describe Harden? As the poster boy for WebMD? Harden has pitched over 148 IP exactly once in his seven-year career (while spending seven stints on the DL in the last five years), and Texas really could use 175 IP or so from him. But is that a pipe dream?

If Harden can’t log that number of innings, then the Rangers better pray Scott Feldman can somehow duplicate his 2009 season in which he came out of nowhere to win a club-record 17 games. Of course, both of these are two very big ifs, and smart Fantasy owners know that counting on either of these developments would be extremely unwise.

If Harden can’t stay healthy and Feldman can’t repeat his success, Manager Ron Washington will be under intense pressure to build a rotation that is competitive. Could Colby Lewis, back after a superb couple of years in Japan, be the answer? Well, the last time he was a full-time starter in the bigs was in 2003, and he recorded a 7.30 ERA that season, so clearly he’s a big question mark as well. The starters behind them – Tommy Hunter, Brandon McCarthy, Derek Holland, Neftali Feliz, C.J. Wilson and Matt Harrison – all come with concerns of their own.

Still, Texas somehow won 87 games last year – its first winning season since 2004 – despite having an offense that ranked near the bottom of the American League in OBP and BA. They only plated 784 runs, the team’s lowest total since 1992. But you have to know, given the history of this team’s hitting since Rangers Ballpark was unveiled in 1994, that hitting won’t be an issue two years in a row.

Personally, I’m expecting the team’s offense to bounce back in a big way. Finally seeing the real Jarrod Saltalamacchia would be a good start. The team will also need more from Chris Davis, who was so good in a half a season of work in 2008, but struggled last season. Ian Kinsler became a 30-30 man last year, so we can’t really pick on him, but what happened to his batting average? Michael Young had a great season, but injuries cost him a few weeks. A healthy Young (and he had been pretty durable for many years before 2009) will definitely help matters. It’s also reasonable to expect some offensive growth from youngster Elvis Andrus. Nelson Cruz could have some upside still, and it will be fun to see what Julio Borbon can do in his first full season. Oh, and then there’s the addition of some dude named Vladimir Guerrero. Clearly, there are plenty of reasons to expect the Rangers to boast a much more potent offense than last season.

In the end, though, it’s going to take some surprise performances from the pitching staff (Feliz? Holland? McCarthy?) for Texas to overcome the Halos, but assuming its hurlers can duplicate last season’s middle of the pack performance (which was actually pretty impressive after they finished dead last in AL ERA in 2008), the Rangers should be able to make a run at 90 wins. However, whether that’s good enough for a playoff spot remains to be seen.

By RotoRob
This entry was posted on Wednesday, February 24th, 2010 at 4:21 pm and is filed under BASEBALL, RotoRob, Team report. You can follow any responses to this entry through the RSS 2.0 feed. You can skip to the end and leave a response. Pinging is currently not allowed.