The Wire Troll: One Borbon, One Scotch, One Beer 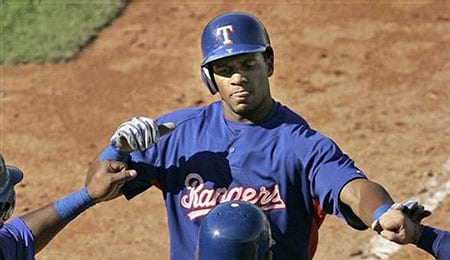 Julio Borbon could be the new lead-off man in Texas.

Julio Borbon, OF, Texas Rangers: The 23-year-old Borbon was recalled from Triple-A Oklahoma to fill the void created when the Rangers put Nelson Cruz on the DL this week with a sprained ankle. Down on the farm, Borbon put up a great .310 BA with 25 thefts. Saturday night against the Red Sox and Brad Penny, the Rangers had him batting in the lead-off slot and he responded in fine fashion, going 4-for-5, scoring two runs, driving in a couple and stealing four bases. Okay, before we pencil him in to break Ricky Henderson’s career stolen base record, let’s just remember it is only one game, but what a game it was. Do the Rangers have a new lead-off bat for the next several weeks? If you have the need for speed, run, don’t walk to your nearest waiver wire and get Borbon rostered.

Pedro Martinez, SP, Philadelphia Phillies: The much anticipated debut of Martinez as a Phillie came Wednesday against the Cubs. It certainly was a far cry from the Pedro of old, but he did manage a decent start, limiting the Cubs to three runs over five innings while striking out five. He reached the low-90 with his fastball, so it appears he has some giddy up left in the old heater. This is not your father’s Martinez, but he could be an asset down the stretch nonetheless. He faces the Diamondbacks and the Mets in a two-start week, and is a must start in all formats against those struggling offenses.

Alcides Escobar, SS, Milwaukee Brewers: The Brewers finally said enough is enough, and sent the struggling J.J. Hardy to Triple-A Nashville and Wednesday promoted the 22-year-old phenom Escobar. Escobar went 42-for-52 in the stolen base department at Triple-A Nashville with a great .298 BA. If he can manage to get on base, he could bring a plethora of stolen bases and runs scored to your Fantasy squad down the stretch. If you’re sitting on that Number One waiver priority in your Fantasy league this is a good time to use it.

Randy Ruiz, DH, Toronto Blue Jays: Surprise, surprise — Travis Snider is still at Triple-A Las Vegas. Many, including myself, anticipated that Snider would get the call after the Jays moved Alex Rios through waivers in a shocking move this past week, but it appears that we now have to wait a couple more weeks until September call-ups before getting another look at Snider. As for Ruiz, he was having a great year at Triple-A Las Vegas, hitting .320 with 25 homers and 106 RBI, making him a strong candidate for the Pacific League’s MVP. The former Twin smacked a homer in each of his first two games as a Jay, demonstrating that the power potential is very real and that he is worthy of a roster addition in AL-only leagues.

Jeff Baker, 2B, Chicago Cubs: The 28-year-old Baker is the current flavour of the week at second base in Chicago. Since being inserted into the lineup on a full-time basis last week, he’s been smacking the ball to the tune of a .500 BA with one homer and six RBI. Baker did manage to hit 12 long balls in 299 at bats for the Rockies in 2008, so he has the potential to generate some solid power numbers at a relatively weak position down the stretch.

Tom Gorzelanny, SP, Chiago Cubs: Since the trade to the Cubs, the ex-Pirate Gorzelanny has now pitched two gems wrapped around one total disaster. Saturday, against his former team, he pitched five strong innings, allowing only three hits and striking out eight in getting the victory. With that strong start Saturday he has earned at least another start as the Cubs try to play catch up in the NL Central. If Gorzelanny can return to that strong 2007 level of play, he would be an asset to both the Cubbies and your Fantasy squad down the stretch. However, with potential reward comes risk and there is no shortage of risk with Gorzelanny.

Bobby Parnell, SP, New York Mets: There has to be something to cheer about at Citi Field this year and Parnell might be the reason for optimism over the final six weeks of 2009 for the injury-ravaged Mets. Friday night against the Giants, the 24-year-old hurled six shutout innings with seven strikeouts. In his second start since being moved from the pen to the rotation, he was hitting the mid-90s on the radar gun into the sixth inning, a very good sign. Parnell should be rostered in AL-only and keeper formats.

Daisuke Matsuzaka, SP, Boston Red Sox: The Red Sox could use a return to form for the September run. This is worth a roll of the Dice.

Tim Hudson, SP, Atlanta Braves: With four rehab starts under his belt, a return to the Braves’ rotation is not that far away.

Justin Duchscherer, SP, Oakland Athletics: He completed his final rehab start at Triple-A Sacramento and was in fine form, tossing five scoreless innings. He could return to the rotation Tuesday against the Yankees, but could take a serious beat-down against a very strong offense.

Aki Iwamura, 2B, Tampa Bay Rays: He is currently on a rehab assignment at Triple-A. Ben Zobrist is hitting .159 in August. Is it time for a change in Tampa?

Mike Gonzalez, RP, Atlanta Braves: You really don’t think that Rafael Soriano can stay healthy for a full six weeks, do you?

Neftali Feliz, RP, Texas Rangers: Count those strikeouts and smile. A save or two before year’s end is not out of the question.

Matt Diaz, OF, Atlanta Braves: He has three thefts since the beginning of August and is hitting lefties a ton as he always does. Diaz is the ultimate platoon bat and with Nate McLouth currently suffering through a left hamstring strain, playing time should be a lock.

Elijah Dukes, OF, Washington Nationals: He has 15 RBI in August and is owned in just 22 per cent of CBS Leagues. Opportunity is knocking.

Gil Meche, SP, Kansas City Royals: He managed a win in rather shaky fashion in his first start off the DL. Will things mesh for Gil down the stretch?

Taylor Teagarden, C, Texas Rangers: Jarrod Saltalamacchi hit the DL so Teagarden has moved into a starting role for at least the next couple of weeks.

Jayson Nix, 2B, Chicago White Sox: He has eight homers and seven stolen bases in 156 AB and is temporarily replacing the injured Chris Getz. One could find much worse short-term solutions in the middle infield.

By Tim McLeod
This entry was posted on Sunday, August 16th, 2009 at 10:17 am and is filed under BASEBALL, The Wire Troll, Tim McLeod. You can follow any responses to this entry through the RSS 2.0 feed. You can leave a response, or trackback from your own site.