Can the Angels Four-Peat? 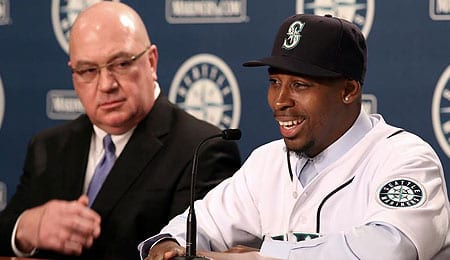 With Chone Figgins gone to Seattle, the Angels need a new lead-off man and third baseman.

As we continue to ramp up our baseball coverage in anticipation of the soon to be released 2010 RotoRob MLB Draft Kit, today we’ll take a look at another team, namely the Angels.

Although they haven’t been back to the World Series since taking the title in 2002, the Los Angeles Angels continue to dominate the AL West, having won three straight division crowns, taking home the title in 2009 by a whopping 10 games.

But with all the changes in personnel this offseason, including the loss of some serious core players, and the expected growth of both the Texas Rangers and Seattle Mariners (two teams we will discuss in more detail soon), can the Halos possibly hope to make it four straight AL West titles?

For starters, the Angels have lost their lead-off hitter with Chone Figgins having left as a free agent to division rival Seattle. Not only will the Halos be missing his spark at the top of the lineup, but the fact that he’s helped strengthen a team within their own division makes this loss really tough to swallow. Erick Aybar, who enjoyed a breakthrough season in 2009, is the likely candidate to replace Figgins at the top of the Angel order.

Aybar’s performance last year earned him a spot on the coveted AL All Wire Troll Team, but he doesn’t swipe nearly as many bases or draw walks at the same rate Figgins was capable of, so the Halos will need to make up for that loss. Expect Aybar to score a crapload more runs that he did last year, though.

Also gone is long-time clean-up hitter Vladimir Guerrero, who also left via free agent to a division rival – the Rangers. The Angels are sure going to be facing some familiar faces a lot in 2010, and Guerrero has a hell of a lot to prove after enduring his weakest season ever. Replacing Vlad as DH is free agent pick Hideki Matsui, who brings to the West Coast his championship experience from the Yankees. Godzilla could be a hugely important addition, as if he can stay healthy he provides the Angels with a big run producer from the left side of the plate.

Of course the biggest loss the Angels suffered this season was when ace John Lackey signed with the Red Sox. This leaves Jered Weaver and Joe Saunders as the team’s top two starters, which isn’t bad at all, but what LA really needs is for Ervin Santana to rebound. The team really doesn’t have an ace currently, but if Santana can rediscover his 2008 form, he could be that man. He was injured at the start of last year, and never really recovered. However, in looking at Santana’s second half work (7-3, 3.90), he looked a lot more like the 2008 version than we saw in the first half of 2009, so there’s definitely hope that he could emerge as the team’s ace.

What this team really has going for it is depth. Kendry Morales had a serious breakout in 2009, but if he were felled by an injury, Brandon Wood is quite capable of filling in. (In fact, although he’s pencilled in as the starting third baseman, the Angels are really counting on Wood to be a major contributor at multiple positions; his development is very important to the team’s fortunes in 2010.) And if either Aybar or the extremely injury-prone Howie Kendrick were to get hurt, Maicer Izturis has proven himself to be a fine backup (and his continued production is a big key). Freddy Sandoval is in the middle infield mix, too. Mike Napoli has Jeff Mathis behind him, and while Mathis only made modest improvements last year, I still believe there’s upside there. If nothing else, his incredible playoff performance in 2009 opened some eyes. And when Napoli isn’t catching, he’ll see more time at DH, spelling Godzilla and his troublesome knees.

The starting outfield of Bobby Abreu, Torii Hunter and Juan Rivera is not exactly young, but is solid. However, an injury to one of these three could prove troublesome as the Halos aren’t bursting with glorious options behind them. I mean, let’s get real – Matsui’s days of patrolling an outfield spot are done, so he’s an emergency fill-in at best. That leaves unsavoury and unproven options like Reggie Willits, Terry Evans and Chris Pettit behind the starting three outfielders. Willits was a revelation in 2007, but hasn’t hit worth a lick since. Evans has performed well at Triple-A, but has seen just 19 games of big league action, and doesn’t have much upside at age 28. Pettit has even less major league experience, but he also had a big year at Triple-A and is least young enough to have some room for growth.

The Angels have to be considered the favourites to again win the AL West, but I would not be shocked in the least if Texas overcame them this year — especially if the Rangers’ offense rebounds.

By RotoRob
Tags: Los Angeles Angels
This entry was posted on Friday, February 19th, 2010 at 4:15 pm and is filed under BASEBALL, RotoRob, Team report. You can follow any responses to this entry through the RSS 2.0 feed. Both comments and pings are currently closed.