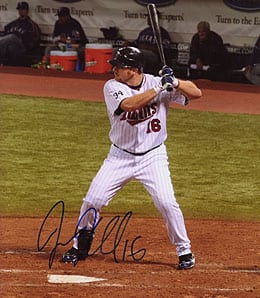 The way Jason Kubel has been taking it to the next level this year, you better hang on to that autographed 8″ x 10″.

We’re back, with more of our 2009 in-season Fantasy rankings, today focusing on the least glamorous offensive position there is — the designated hitter. Hey, somebody’s got to it, right?

Although he qualified at outfield last season, we’ve listed Jason Kubel here, as we expect him to mostly DH this year. If he was listed among the outfielders, he’d rank No. 67. Gary Sheffield was originally ticketed for this list, but when he wound up in the NL, we had to nix that idea. And it’s too late to include him among the outfielders which we already released last month, so the best we can do is tell you he’d currently rank No. 86 as an outfielder.

1. David Ortiz, Boston Red Sox: Wrist problems really brought Ortiz’s numbers down in 2008, and he wasn’t the hitting machine we’ve come to expect. He’s ostensibly healthy this season, yet, so far, he’s been struggling even worse than he did last year. Recently, we advised owners not to panic, but nothing has improved since then. Everyone is anxiously awaiting the real Big Papi to show up, but is it fair to wonder how much he misses the protection that Manny Ramirez used to provide?

2. Jim Thome, Chicago White Sox: Sure, he’s one of just five active players with over 500 career homers; in fact, Thome is now sitting just five shy of 550. But he’s been in decline for a couple of years now, especially in the BA department, and that’s something that is not likely to reverse itself soon. Sure, he remains an important part of a powerful Sox lineup, is still capable of launching the long ball, and remains a solid run producer, but he’s no longer a must-own Fantasy commodity in shallower mixed leagues.

3. Jason Kubel, Minnesota Twins: Kubel broke through with his first 20-homer season last year, and as he enters his power prime, he looks poised to take it to the next level. A productive start has made him a waiver wire fave in the early going, but note that with that the crowded Minnesota outfield, he won’t spend a lot of time shagging balls, even though he is a capable fielder. Look for Kubel to snag the occasional start in the outfield when one of the infielders needs a rest and takes over his DH spot.

4. Travis Hafner, Cleveland Indians: Hafner hit rock bottom last season, struggling through a right shoulder injury that sapped him of his once-feared extra-base pop and limited him to 57 games, ultimately requiring surgery in October. Pronk looked lost, striking out way more often and simply being unable to reach base consistently. This season, despite a sluggish spring, Hafner was making a great comeback, rediscovering his power stroke. Unfortunately, the same shoulder has become a problem again, landing him back on the DL. It’s awful news for those you who took a gamble on him with an 18th round pick and looked to be getting a great return on your investment for the first few weeks of the season.

5. Frank Thomas, F/A: Frank Thomas was better with the A’s than he was in Toronto, but not enough so to stop them from cutting him free. We wondered at the time if this was it for the Big Hurt, and while there are teams that could use help (how about having him finish his career back where it started with the White Sox?), so far there’s been no news of a possible deal with anyone. If he doesn’t land something by mid-season, Thomas will likely pack it in, 32 hits shy of 2,500 for his career.