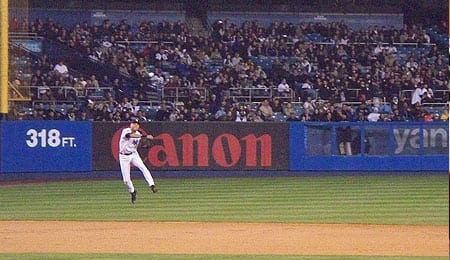 What kind of numbers could Derek Jeter put up in his walk year?

The 2010 RotoRob MLB Draft Kit rages on today with another of our Top 10 Lists Fantasy Owners Always Wanted But Were Afraid to Ask For. So while Cliff Lee owners scramble around for a replacement for the next little while, let’s have a look at that always interesting beasts — the contract year player.

Ah, contract year players. This is the time when you see players perform out of their minds and rise from mediocrity in order to trick desperate teams in free agency. A career .250 hitter will hit .330 out of nowhere in his contract year in order to get that $50 million deal. A career 4.50 ERA pitcher will lower that ERA to 3.70 and parlay that into a $48 million contract. The contract season either makes or breaks a player’s bank, and we are here to show you the top 10 players in the last year of their contract going in to 2010. These are players who have been good in the past and are likely to put up even more monstrous numbers in order to gain that huge contract. Hopefully, for prospective MLB teams, none of these guys turn out to be Carlos Silva or Andruw Jones.

1. Carl Crawford, LF, Tampa Bay Rays: Crawford is a speed demon. He is a web gem waiting to happen. He can go yard on you. He can hit for average. He can fly. He can save five babies from a burning building. You get the point…Crawford is a five-tool player and will be the number one outfielder in free agency next year. He hit .305 last season with 15 home runs and 68 RBI while stealing an ungodly 60 bases. The thing is, he gets better and better every year, so it’s easy to expect him to put up unreal numbers in his contract season. If Tampa is out of the running at the All-Star break, I would not be surprised to see Crawford traded to a contender, especially with Crawford Jr. (Desmond Jennings) ready for a big-league job.

2. Victor Martinez, C, Boston Red Sox: Martinez is probably the second best catcher in baseball behind Joe Mauer, a formerly potential free agent and No. 1 on our list until he signed a huge-ass deal on March 22. A mid-season acquisition from the Cleveland Indians’ fire sale of 2009, Martinez helped push the Red Sox to a post-season berth. Rumours are the Red Sox are already trying to sign him to an extension, but it has not happened yet and as per most team policies, contracts are not discussed during the season. Playing in hitter-friendly Fenway Park should benefit the switch-hitting Martinez who batted .303 with 23 home runs and 108 RBI last season. While he’s 31, there are no signs of him slowing down. A good hitting catcher is always a hot commodity.

3. Derek Jeter, SS, New York Yankees: The captain of the Yankees has never really had a bad season, and plays like a fine wine. Last season saw him bat .334 with 18 home runs and 66 RBI. His defense is not as good as it once was, but it is still about average. Chances are he remains a Yankee for life, but if a falling out occurs, all bets are off and Jeter could be in a uniform without pinstripes. While he is 35 years old, it is still expected he would get a three-year deal based on his career.

4. Cliff Lee, SP, Seattle Mariners: Lee’s start in Seattle has been a rough one. Spring Training has done him no favours as he was in a minor collision with Arizona’s Chris Snyder that ultimately led to a strained abdomen, and also received a five-game suspension from MLB for purposely throwing at Snyder’s head later in the game in a possible retaliation scenario. As we alluded to in the intro above, the injury landed Lee on the disabled list to start the season and he also had off-season surgery on his foot. If he can bounce back and prove these injuries are nothing to worry about, he will more then likely enjoy the spacious confines of Safeco Field in Seattle and produce huge numbers enabling him to land a contract in lines of fellow ace Felix Hernandez’s recently signed five-year, $78-million contract.

5. Derrek Lee, 1B, Chicago Cubs: The Cubs might be underachievers and suffering from a curse, but it’s not because of Lee who consistently gets better with age, producing monster numbers year in and year out. Last year he hit .306 with 35 home runs and 111 RBI for a Cubs team that missed the playoffs. While Lee is getting older (34 to be exact), he has shown no signs of slowing down and still produces Gold Glove caliber defense at first base. He will most likely get somewhere in the range of a three-year contract at the end of this season.

6. Josh Beckett, SP, Boston Red Sox: Another expensive Red Sox player, Beckett will likely command Hernandez/Justin Verlander-like money this offseason. Beckett’s regular season numbers seemed to slip a bit, but he is still untouchable in the playoffs. Last season, he went 17-6 with a 3.86 ERA. Beckett is still one of the better strikeout pitchers in baseball, finishing last season with a 199 Ks on the year. He’s only 29 and because of his outstanding track record, he will be getting paid big time after this season.

7. Javier Vazquez, SP, New York Yankees: Despite his outstanding stuff last season, Vazquez was one of the least talked about starting pitchers with the Braves. Atlanta shipped him to the Yankees this offseason as it has a plethora of starters. Vazquez was previously with the Yankees and had just average numbers, but this time around might be different in a contract year. Last season, he finished with a 15-10 record and a 2.87 ERA and most likely only had that many losses because he ranked just 164th in run support among all starting pitchers. His one previous season in New York in 2004 saw him go 14-10 with a 4.91 ERA although he did make the All-Star squad that season. Vazquez is getting up there in age (34), but a solid season in the Bronx could see him net one last big paycheque.

8. Mariano Rivera, RP, New York Yankees: The only reason he is so low on this list is because he is ancient and will more than likely either re-sign with the Yankees or retire. But if some other team can lure this stud closer away from New York, they would be in luck, despite Mo’s age. As Trevor Hoffman has proved since moving from the Padres to the Brewers, some closers just get better with age and Rivera is one of them. Last season, Rivera went 3-3 with 44 saves and a blistering 1.76 ERA. For his career, Rivera has 526 saves and is a sure thing Hall of Famer. As previously stated, it’s not likely he will ever play for a team other than the Yankees, but if some team could sway him away for the last year or two of his career, he is almost guaranteed to produce.

9. Adam Dunn, OF/1B, Washington Nationals: This 30-year-old does two things: he hits home runs and he strikes out. But Dunn is guaranteed to give you 30-plus whammies a year. His lowest home run total was 19 in only a half season in his rookie year in Cincinnati. Last season, Dunn mashed 38 dingers and drove in 105 runs for a horrible Nationals team. With Washington improving the team this offseason, it wouldn’t be surprising to see Dunn hit 50 home runs and drive in 120 runs, prompting a team to give him a huge contract. After all, he is not too old yet and consistently gives you home runs every year if you can live with his high strikeout totals.

10. Paul Konerko, 1B, Chicago White Sox: Konerko has had his ups and downs while playing with the Sox but one thing is certain — He’s a lock for 25 plus home runs every season. Last season saw him hit 28, and it would not surprise anyone to see the slugger knock out 40. While he is getting up there in age, 34 to be exact, he still produces. A .277 hitter last season, Konerko also drove in 88 and had a strong .353 OBP. He should be one of the top first basemen on the free agent market next season, probably getting one last multi-year contract for his career.

Don’t forget about these players, who sometimes fall through the cracks on your cheat sheets. Just because they don’t fit anywhere else doesn’t mean they don’t have value; however, make sure you understand they are locked in to your DH spot, so if you grab one of these dudes, you may need some position flexibility elsewhere.

This year, there are speed options all over the place, with guys like Juan Pierre, Scott Podsednik and Rajai Davis, plus there are plenty of speedy kids coming up. In fact, there’s more speed available than there’s been in many years, so it’s advantageous to grab power in OF and leave speed for later on.