Do the Mariners Have What it Takes? 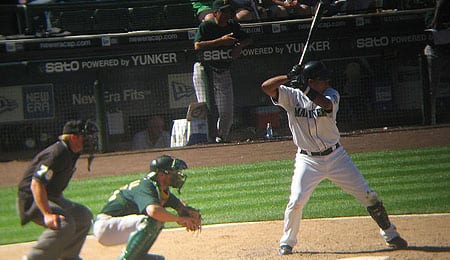 Are the Mariners serious about shifting Jose Lopez over to third base?

With February waning and the snow falling harder than it has all winter, it’s time to kick up our baseball coverage in a big way. We’ve already started the 2010 RotoRob MLB Draft Kit, and we’ve taken sneak peaks at the 2010 season for several big league teams, including the Angels and Rangers very recently. Today, we’ll examine the chances of another AL West club, namely the Seattle Mariners.

After struggling through 2008 (101 losses, the team’s worst showing in 25 years), the Mariners bounced back very impressively last year, increasing their win total by 24 and climbing out of the division cellar with 85 wins.

But despite that lofty turnaround, they still finished a dozen games behind the Los Angeles Angels in the West. Can the Mariners take another quantum leap this year to close that gap?

One of the biggest additions for the team this offseason was Chone Figgins – a man charged with helping to kick start the Mariner offense and to replace the departed Adrian Beltre at third base. At any rate, it’s assumed he’s replacing Beltre. Interestingly, the team is toying with the idea of using Figgins at the keystone corner this year, shifting usual second baseman Jose Lopez over to the hot corner. Should Figgins gain second base eligibility again – something he hasn’t had since 2005, when he was one of the game’s top super subs – his value will definitely increase, offering Fantasy owners some always welcome flexibility with their lineups.

Ichiro Suzuki will continue to serve as the lead-off hitter, with Figgins taking over in the two-hole – a spot mostly held by Russell Branyan last season.

One the mound, the biggest acquisition was Cliff Lee, who will team with Felix Hernandez to give Seattle a phenomenal top two. In fact, it could be the best in the game, with Lee already owning one Cy Young, and King Felix just missing out last year and a likely candidate for some hardware for the foreseeable future. What a fantastic lefty-righty combo, too. Now imagine if Seattle can get close to a full year out of Erik Bedard (who won’t start throwing off a mound until the end of Spring Training) as the No. 3 starter. That’s some deadly front three.

The southpaw Lee had minor surgery on his foot three weeks ago, putting him slightly behind the rest of the pitchers, but it doesn’t seem like this will be an issue. He should be on track to take his regular turn once Spring Training games get underway.

The bullpen, third best in the AL last year, could be improved if Chad Cordero can finally make it back from 2008 shoulder surgery. He’s lost a ton of weight this offseason, and is still just 27 years old, so he could emerge as a real sleeper in the Mariner pen.

Seattle was definitely busy this offseason. Beyond Figgins and Lee, the team added Yusmeiro Petit, who gives them another possible starting option, but is a long shot considering he’s not even on the roster anymore and was late to camp while attending a personal matter. Overpaid and underperforming hurler Carlos Silva was shipped to the Cubs for problem child Milton Bradley in one of those ‘let’s hope a change of scenery helps both players’ kind of deals. This could be a super move for the Mariners, as Bradley, who has been with eight teams as he embarks on this 10th major league season, still has plenty of offensive ability, and he’ll solve the revolving door situation they had in left field last year.

Also added to help the outfield was Eric Byrnes, who has been a colossal disappointment the past couple of years. However, given how little the Mariners will be on the hook financially here, it’s a good gamble to see if he can bounce back as a fourth outfielder type.

At first base, Branyan is gone, and the team has added Casey Kotchman and Ryan Garko to form a platoon. Even if Kotchman can’t bounce back offensively, he’s such a solid defender. Garko can smoke southpaws, so if he’s limited to that job, his numbers should continue to improve.

Utility infielder Chris Woodward has returned to Seattle, and he could be a useful spare part for the Mariners, but his days of Fantasy value (not that he ever really had much) are long gone.

Kenji Johjima has gone back to Japan, leaving the uninspiring trio of Rob Johnson (who is trying to recover from several off-season operations), Adam Moore and Josh Bard to handle the catching duties.

Of course, the question remains whether Seattle has enough sticks to catch Texas and LA. The team was dead last in the American League in almost every key offensive category last year, finishing 46 runs behind the Royals. Yes, that’s bad.

Bringing in Figgins helps, but Seattle still lacks a big bopper, so it will need to see improvements throughout the lineup. Can Ken Griffey Jr., re-signed to serve another season as the club’s DH, bounce back? Reports that he lost weight this offseason are promising; perhaps that means he can stay healthy enough to enjoy a renaissance of sorts. Hell, it’s hard to imagine him being worse than last year.

Seattle’s pitching should be a real strength and the team will also feature strong infield defense, but without a marked improvement in offense, I can’t see Don Wakamatsu’s squad bridging the gap on the top two teams in the AL. And in the end that means Seattle’s post-season drought will likely reach a decade.

By RotoRob
This entry was posted on Friday, February 26th, 2010 at 5:49 pm and is filed under BASEBALL, RotoRob, Team report. You can follow any responses to this entry through the RSS 2.0 feed. You can skip to the end and leave a response. Pinging is currently not allowed.