Baseball Links of the Day 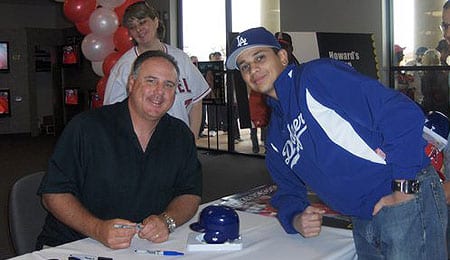 We don’t normally link to other sites, preferring instead to deliver original content, but as part of a new arrangement with TBS, we’ll be highlighting some of their content over the next few weeks. In return, they will be offering up some goodies which we will give to our readers through various contests. Swag! Sweet!

Chip Caray writes that, considering the job Mike Scioscia has done for the Angels in the wake of the Nick Adenhart tragedy, he deserves his second American League Manager of the Year nod. In Carey’s column this week, he predicts all of the award winners for the Junior Circuit. See if you agree with his choices.

Marc Fein, meanwhile, suggests that fans better bundle up for the playoffs this year, as it looks like they will mostly be held in cold-weather cities. In his Five Thoughts for the Week column, Fein also writes about what a good role model Brandon Inge of the Detroit Tigers is.

In his column, Dennis Eckersley answers reader questions about the always intense Boston Red Sox-New York Yankees rivalry. Wondering how this rivalry got so ugly over the years? Eck’s got the answer.

Over at Advanced Fantasy Baseball, Jon Williams offers up his choices as the top performers in the Southern League this season. It’s no surprise that the sport’s top prospect, Jason Heyward of the Atlanta Braves, heads this list.

In other baseball matters, Tim McLeod has been on vacation, preparing for winter, which will arrive where he lives about six hours from now. But don’t fret, he’s been hard at work picking his All-Wire Troll teams for both the American and National Leagues, and promises that those will be coming “soon.” Probably as soon as he defrosts his keyboard.

By RotoRob
This entry was posted on Saturday, September 26th, 2009 at 12:36 pm and is filed under BASEBALL, Links, RotoRob. You can follow any responses to this entry through the RSS 2.0 feed. You can leave a response, or trackback from your own site.