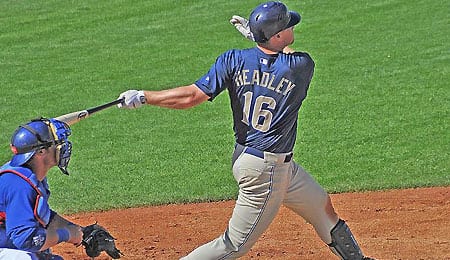 Chase Headley is shifting back to his natural position this year.

Coming off a terrible 2008 in which the Padres dropped 99 games, the franchise’s highest loss total since 1993, there was virtually no excitement surrounding the club entering last season. The team’s absurd stance on trading Jake Peavy (wait, it wasn’t a good idea to tell other teams you had to trade him for salary reasons?) resulted in a bunch of low ball offers and furthered soured the fan base. As if that wasn’t enough, the Padres also exercised a $9 million option on all-around tool Brian Giles despite his troubles off the field stemming from a video that appeared to show him knocking his then-girlfriend to the ground with a strike. A bad decision became worse when superior players started inking one-year deals for less money.

With expectations legendarily low, San Diego finally took the leap and began fielding a team of hungry young players looking to establish themselves at the major league level. The result was a surprisingly competitive and entertaining club that went 39-35 after the All-Star break to improve on its 2008 mark by 12 games. It ultimately ranks as little more than a moral victory considering San Diego finished 20 games out of first place (and 13 games out of third), but it was a step in the right direction.

There’s exactly one player on San Diego’s current roster that scares opposing pitchers, and that is first baseman Adrian Gonzalez. Despite working with little protection in the lineup, Gonzalez hit .277 with 40 home runs, 99 RBI and 90 runs scored. He also drew 119 walks (nearly twice as many as Chase Headley, who finished second on the team with 62) as pitchers clearly preferred to pitch around him in any key situation, an assertion further borne out by Gonzalez’s Barry Bonds-like .478 OBP with runners in scoring position.

A trio of youngsters showed some promise last year, led by shortstop Everth Cabrera, who took over early on from journeyman Luis Rodriguez and showed flashes of being a competent lead-off hitter. Cabrera’s final numbers (.255, 59 runs, 25 steals) weren’t amazing, but he possess the type of speed a team that plays in such a spacious park needs.

Mammoth outfielder Kyle Blanks showed prodigious power, socking 10 home runs in 148 at-bats before a foot injury shut him down. He still has a sizable hole in his swing (55 whiffs, more than one every three ABs) and lumbers a bit in left field, but he has the potential to hit behind Gonzalez and help provide him the protection he desperately needs.

Will Venable rounds out the group, posting a solid .256-12-38 line in 293 at-bats. He was actually cruising along at a .273 clip before going 1-for-22 to close the season. The Ivy League product has respectable speed and pop, and he looks ready to be the team’s primary right fielder this year.

The departure of Trevor Hoffman left a void at the back end of San Diego’s bullpen, but Heath Bell stepped into the role and the team didn’t miss a beat. Bell is a throwback on the bump with an aggressive style and powerful fastball to boot. Whatever shortcomings outgoing GM Kevin Towers had, his ability to spot and cultivate powerful bullpen arms is unquestioned.

With Bell moving into the ninth inning role, the team needed some unknown hurlers to step up and get through the seventh and eighth. They got that in spades with Mike Adams (0.73 ERA, 0.59 WHIP in 37 IP), Luke Gregerson (3.24 ERA, 93 Ks in 75 IP) and Joe Thatcher (2.80 ERA, 55 Ks in 45 IP) all turning in excellent performances. In particular, Adams’ work was nothing short of spectacular. The lanky right hander gave up just 14 hits and three earned runs in 37 appearances. In all, San Diego’s bullpen featured five pitchers (the four listed above along with Adam Russell) that averaged more than 10 strikeouts per nine innings, which demonstrates that the group wasn’t simply a product of PETCO Park.

It was a down year for San Diego’s rotation, however, with Kevin Correia (12-11, 3.91 ERA) operating as the team’s only reliable starter. In fact, Correia was the only Padre to start at least 20 games. Newcomer Clayton Richard looked promising after coming over from Chicago in the Peavy deal, as did homegrown arms Wade LeBlanc and Tim Stauffer. Towers’ decision to stockpile young arms over the years looks like it’s finally starting to bear fruit, though the longtime GM won’t be around to see it.

The aforementioned Giles made the decision to retain him look even worse with his play as the veteran never got going, hitting an abysmal .191 with just two home runs in 225 at-bats before mercifully being placed on the disabled list with a dislocated labia. Giles has shown his priorities to be banging skanks, working on his tan and ripping off the Padres (not necessarily in that order). One can only hope he’s played his last game in the majors.

Kevin Kouzmanoff didn’t finish with terrible numbers, but his average dropped for the third straight year while his steadfast refusal to work the count led to another season of low walk totals and the accompanying sub par OBP. His power numbers (18 HRs, 88 RBI) weren’t great for a third baseman, either, though at least he cut down on his strikeouts.

San Diego’s two highest paid starters (Peavy and Chris Young) combined to make 27 starts, going 10-12 in less than 160 innings of work. Their health woes and disappointing performances were mirrored by countless others as the Padres’ rotation resembled a revolving door. Amazingly the team had 15 different players start games, including seven taking between 10 and 19 turns in the rotation.

The only two pitchers to pitch more than 100 innings (besides Correia) were Chad Gaudin and Josh Geer, who just happened to do arguably the worst job of anyone thrust into the role. Gaudin (4-10, 5.13 ERA, 1.53 WHIP) was dealt to the Yankees before the trade deadline, while Geer (1-7, 5.96 ERA) was sent outright to the minors following the end of the regular season.

Gonzalez’s name was once again bandied about in trade talks, but it’d be hard to deal him yet considering he’s only 28 and still has two years on his contract at an incredibly affordable $10.25 million. Even beyond what he does on the field, Gonzalez is arguably the team’s only marketable star, and the fact that he’s of Hispanic descent is important given San Diego’s proximity to Mexico. The Padres have to entertain offers, but don’t expect them to deal Gonzalez until they develop another signature player or are completely overwhelmed by the package of players being offered.

Conversely, the team did finally pull the trigger on dealing Kouzmanoff as part of a four-player trade with the A’s that netted them some much needed outfield depth. It’s arguable as to whether or not they received enough value for Kouzmanoff, but the move allows the team to move Headley from left field to his natural third base while opening up a spot for Blanks. Bringing back Scott Hairston, whom they traded last year, gives them a solid fourth outfielder that owns some pop and speed. The downside with him is his inability to stay healthy. Aaron Cunningham, the other player acquired, is still young and is a fairly well regarded prospect, but he doesn’t figure to play much in 2010.

San Diego also signed Jerry Hairston Jr., giving them another brother tandem and adding a versatile bat with speed to their bench. In terms of moves flying under the radar the Padres’ decision to claim former O’s southpaw Radhames Liz could bear fruit down the road. Liz was ranked Baltimore’s No. 2 prospect by Baseball America in 2008 so keep an eye on him.

The NL West tends to fluctuate wildly from one season to the next. The Dodgers tightened their purse strings considerably, San Francisco still hasn’t addressed its offensive deficiencies and the last time Colorado reached the playoffs it followed that up with a 74-88 effort. Still, it seems like a stretch to think the Padres are ready to leapfrog three clubs to compete for a divisional crown. Incremental improvement and a push for .500 seem like more realistic goals.

By Herija Green
Tags: San Diego Padres
This entry was posted on Friday, January 22nd, 2010 at 9:09 am and is filed under BASEBALL, Herija Green, Team report. You can follow any responses to this entry through the RSS 2.0 feed. Both comments and pings are currently closed.