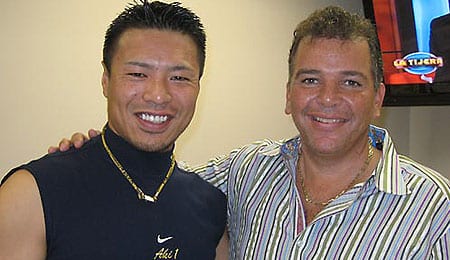 The Pirates have surprisingly taken on Akinori Iwamura’s (left) contract.

Congratulations to the New York Yankees on winning the World Series last week. After nine long years of suffering, the Bronx Bombers have again proved that grossly out-spending everyone in the game does in fact work. Well done! Moving on, let’s not disappoint our loyal Kansas City and Pittsburgh readers and take a quick look at some of the recent goings-on in the world of baseball.

The Tampa Rays sent Akinori Iwamura to the Pirates for Jesse Chavez. I’m a bit surprised that the Pirates would take on Iwamura’s $4.85 million salary for 2010, but don’t expect his stay to be long in the Steel City. The 30-year-old is looking at free agency in 2011 and is sure to be shopped to a contender in mid-summer of next year. The Rays now resolve what once was a congested middle-infield situation and can pencil in Ben Zobrist full-time at second base for 2010.

Aroldis Chapman, the 21-year-old southpaw flame thrower, is still making his rounds in an attempt to secure a deal that would make him both the highest paid MLB player — and for that matter the only player — from the Principality of Andorra. Is he ready for the majors? Question marks abound concerning his control, or lack thereof, but the allure of that 100 mph heat from a lefty is going to earn the top prospect a huge payday this winter.

Kenji Johjima exercised his opt-out clause and is returning to Japan for 2010. This lets the Mariners off the hook for that much-criticized April 2008 contract extension. He has since signed on with the Hanshin Tigers for a reported $22.2 million over four years plus performance-related bonuses. Ultimately, Johjima’s desire to play in a full-time capacity — something that was probably not going to occur in the majors — prompted his decision. Johjima was a class act during his time with the Mariners and we wish him nothing but good fortune as he attempts to lead Hanshin to victory in the Japan Series in 2010.

The Twins exercised the $10.5 million option for 2011 on Michael Cuddyer’s contract. Yes, you read that correct, 2011. The Twins had five days to make a decision and after his monster year in 2009 it is a solid move. Injury free in 2009, Cuddyer posted the numbers that many expected after his breakout campaign in 2006. The Twins are going to need a big season out of him in 2010 if they hope to repeat as AL-Central champions, but bear in mind that Target Field is supposed to play more neutral than the Metrodome, a place that really helped Cuddyer this season (910 OPS at home).

Bobby Abreu has reportedly re-signed with the Angels, penning a two-year deal worth $19 million plus an option year. The Halos’ signing of Abreu for $5 million in the 2008 offseason was a huge steal as he enjoyed a great year in 2009 with his seventh consecutive season of 100+ RBI and 11th straight season of 20+ stolen bases. He maintained his great strike zone judgment this year and looks to be a perfect fit for the Angels looking to 2010.

The Twins and Brewers completed a deal in which Carlos Gomez and J.J. Hardy changed teams. This deal is a win-win for both parties with the Brewers filling a hole at the top of their lineup with the young speedster Gomez, and the Twins acquiring a solid defensive shortstop to replace free agent Orlando Cabrera.

The White Sox have sent Chris Getz and Josh Fields to the Royals for Mark Teahen. The interesting news here is that Gordon Beckham, the converted shortstop, now looks to be a converted corner infielder, as the ChiSox are planning on moving him to second base for 2010. From the Royals’ perspective, this deal makes absolutely no sense at all. Getz moves to an already crowded infield with Alberto Callaspo, Yuniesky Betancourt and Mike Aviles currently on the roster. Alex Gordon is currently penciled in at third base so why add Fields? There is a reason the Royals consistently finish at or near the bottom in the AL Central and this deal doesn’t improve their chances for moving up in 2010. The White Sox, on the other hand, buy themselves some time while waiting for 20-year-old Dayan Viciedo to be Major League ready, but Teahen, with just 27 homers and a .263 mark over the last two seasons combined, is far from being all that much of an improvement over Fields.

The Marlins are rumoured to be working towards a $36 million total payroll heading into 2010. In New York, they call that A-Rod and a middle reliever. Florida has already moved Jeremy Hermida to the Red Sox for a pair of pitching prospects, but look for more moves in the coming weeks. If the Fish can find a home for Dan Uggla, outstanding rookie Chris Coghlan could return to his natural position at second base. Fantasy fans should be drooling over the possibility of Coghlan qualifying at second base in 2010.

Cameron Maybin is scheduled for surgery to repair a partially torn labrum in his left shoulder, but after his strong September is penciled in as the starting centrefielder for Florida in 2010. The 22-year-old is definitely on my “sleeper” list heading into 2010.

To wrap things up, let’s take a quick look at some of the option moves that have occurred over the past several days. In what is probably the biggest no-brainer to date, the Nationals declined the $10 million option on Austin “Lack of Powers Kearns. I guess that .195 BA and three big flies just wasn’t what the Nats were looking for. Kearns walks away with a $1 million buyout, so probably won’t be standing in line for food stamps any time soon. Some of the other player option moves in the past week are as follows:

By Tim McLeod
This entry was posted on Tuesday, November 10th, 2009 at 6:00 pm and is filed under BASEBALL, Tim McLeod. You can follow any responses to this entry through the RSS 2.0 feed. You can leave a response, or trackback from your own site.