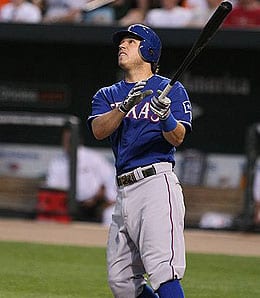 As good as Ian Kinsler was last year, Todd believes Aaron Hill was even better.

As you’ve already read, fellow RotoRob.com writer Tim McLeod and myself were invited to take part in the Fantasy Baseball Trade Market Slow mock draft. While I landed in the No. 2 spot of the draft, this is the first expert draft I’d ever been involved with, so to say I was a little intimidated was an understatement. My goals for this draft were: (a) not to embarrass myself; and (b) draft the best damn team out there.

With the second overall pick in the draft, I took Hanley Ramirez. Yes, I would have preferred Albert Pujols, but a five-category stud in a not so deep position is nice consolation.

After the long wait of 20 picks, I took a gamble early and went with Aaron Hill. He had better numbers than Chase Utley and Ian Kinsler last year. Now I’m not naive enough to think he can repeat 2009’s numbers, but if he can come close, I’ll be happy. Last year’s stinker of a season didn’t scare teams away from Grady Sizemore, who went in the middle of this round.

Sticking wth building my infield, I went with Ryan Zimmerman over Justin Morneau, Adrian Gonzalez or Kevin Youkilis here. I’m really liking the way my team’s pop is coming along at this point. However, I’m not happy about my lack of speed. Adam Lind goes two spots after my Zimmerman pick which is obviously a big leap from where he was going last year. Ichiro Suzuki goes late this round also. I’m continually surprised by how much love people have for this guy. Yes, he hits a ton, but he doesn’t really help in the HR and RBI categories and there are lots of guys who can steal the bases he does. In my opinion, Ichiro is one of the most overrated Fantasy players ever. Also in this round, the first pitcher (Tim Lincecum) is taken off the board, and surprisingly he’s taken by Tim – an ardent believer in offence first. He’s definitely going against the trend.

I addressed the speed issue here by taking B.J. Upton in the hopes that he shows some progress this year after the dog he put up in 2009. At the very least, I overpaid for stolen bases. At this point, the second pitcher goes off the board in Zack Greinke.

My man Youkilis was still handing around, and considering I had thought of taking him two rounds ago, I snatch him up. The first closer comes off the board right after I make my pick, with Jonathan Broxton starting a run of the big four in closers as Joe Nathan, Jonathan Papelbon and Mariano Rivera all go before the end of the round.

I decided that this is the round I want to start building my pitching staff. The rest of the experts are waiting a long time on pitchers, so it’s time to make my move. Unfortunately, I was hoping for Dan Haren, but he went two spots before my pick. So I settle for Justin Verlander.

I had my heart ripped out at this point when Gordon Beckham went one spot before my pick. Distraught, I consoled myself with more pitching, taking Matt Cain. I thought long and hard about Tommy Hanson, but decided to go with the more established track record of Cain.

At this point, Bobby Abreu – he of the seven straight 100 RBI seasons – was still sitting around. Yes, his power has faded, but he still flashes some speed. So if he can get me 20+ stolen bases, I’ll be happy. The run on burners started with Michael Bourn and Nyjer Morgan going in this round.

The need for speed kept on going, as Elvis Andrus, Juan Pierre and Rajai Davis all went in Round 10. Personally, I opted for Denard Span — not the stolen base threat of the players mentioned above, but he won’t kill me with single digit RBI totals and non existent home runs.

I made this pick amid great chaos at home. After settling on Brad Hawpe I just couldn’t pull the trigger so I zeroed in on a closer, only to feel that none was worth the risk at this point. Enter Russell Martin, who became my choice. I’m betting on a bounce back season from the young catcher.

We’re about to enter the money rounds now and I’ll be looking at players with upside here. It’s my belief that Pujols doesn’t win you Fantasy titles, but rather Lind or Aaron Hill do – guys who you pick up on a hunch late in the draft that turn in monster years. It’s just a matter of making the right pick. Easy, right?

By Todd Habiger
This entry was posted on Thursday, January 14th, 2010 at 2:13 pm and is filed under BASEBALL, Mock drafts, Todd Habiger. You can follow any responses to this entry through the RSS 2.0 feed. You can skip to the end and leave a response. Pinging is currently not allowed.