RotoRob Regulars: The Run for the Roses 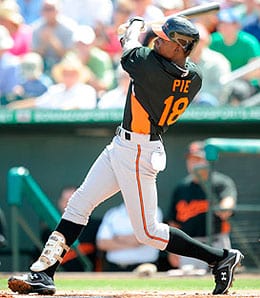 While Tim’s been eating humble pie, Cory has ridden Felix Pie into contention.

It has been a while coming, but it is time to take a quick look at how things are shaking down in the RotoRob Regulars 15-team Fantasy baseball league.

In this, our second year of running the site baseball league, we have seen a lot more of the same from last year’s winner Steve Parsons. The proud owner of the Hidalgo All-Stars is currently leading the pack with 122 points. As purveyor of the “Thrash and Dash Strategy,” he has made a whopping 236 moves as of this writing. Do the math, folks. We are looking at close to two transactions daily over the course of the full season.

More importantly, he has managed a great 12-plus point average across the board as he attempts to make it back-to-back titles. I’d list some of his more memorable acquisitions, but unfortunately I do have a 1,000 word limit per article (that I rarely follow) as imposed by RotoRob himself. Great job, Steve!

Cory Humes representing the fine folks over at MVN is currently running in second with 115.5 points, a scant six and a half points behind our current leader. Some rather astute pickups starting with Felix Pie, Matt LaPorta and Garrett Jones have been instrumental in Cory’s great surge that has vaulted him into contention over the past several weeks. Well done, Cory, and good fortunes keeping that Hidalgo guy honest as we head for home.

Next up on the leaderboard we have the sarcastic stylings of Team Razzball who spent most of the summer slugging it out with the Hidalgo crew for first place, only to have fallen back to 111.5 points and tough times over the past several weeks. His team BA has plummeted of late with Brad Hawpe, Raul Ibanez, and Andrew McCutcheon being the main contributors. The second half has not been kind to Grey and Rudy, but they do have a pile of innings to play with and a late charge can certainly not be ruled out.

Bob Sikon from Fantasy Baseball Trade Market is currently manning the fourth slot with 105 points. He has assembled a formidable pitching staff anchored by Justin Verlander, Wandy Rodriguez and Scott Baker. Bob is also one of the bravest men I know, picking up Barry Zito not once, but twice in the same week.

In fifth at 91 points we have none other than the master of mockery himself, Geoff Stein from Mock Draft Central, who has been rolling along at a steady clip right from the get-go. That Ben Zobrist pickup back at the beginning of May was certainly a great one.

Moving down the ladder I’d be totally remiss if I didn’t pass on congratulations to RotoRob writers Todd Habiger and Jordan Frank, who are currently holding their own at sixth and seventh respectively. Team Habiger has bounced back rather nicely after a disappointing 12th-place showing last year. When you’re a life long Royals’ fan, anything outside of the basement is certainly reason for celebration.

Other than our fearless leader Steve, who I find it a bit of a reach to call “regular,” it has been a tough year for our reader challengers. I must mention the great effort put forth by Doug Mitchell from the Cannot Cantu squad who has played it hard right out of the gate and continues to give it 100 per cent as we head for home. I certainly take my hat off to him as he continues to struggle through myriad injuries while striving to improve his lot down the stretch. Good job, Doug!

In ninth we have last year’s runner-up, Dave McBride of Full Mountie fame. Next year, Dave, remember there are more than five categories and I’m sure we’ll see you right back up at the top of the leader board.

Rounding out our Top 10 is Kevin Orris from FantasyPros911, who I personally have to thank for stealing Mike Aviles from under my nose in the 10th round. After fighting for the rights to Aviles through countless mock drafts this spring I can extend my heartfelt congratulations to Kevin for beating me to the punch in the real deal.

Right on the heels of Orris is our half-time substitution, Andrea LaMont from Blogtalkradio. Thanks for stepping up to the plate and trying to right an abandoned ship. Just imagine what those results could have been if you had a full season to fill that roster with your favourite players from Beantown.

Normally I wouldn’t spend much time analyzing the last few stragglers, but this year I’ve had the opportunity to actually be one of them. When your first four picks happen to be Jose Reyes, Aramis Ramirez, Vladimir Guerrero and Geovany Soto, it isn’t looking real pretty. Toss in a sprinkling of Daisuke Matsuzaka, Audrey (oops, I meant Aubrey) Huff, and Brandon Morrow and it is easy to see how I’m currently slugging it out in 13th with two inactive teams. Erik frigging Bedard…what was I thinking, or was that not thinking? Adam Jones’ injury just proved to be the icing on the proverbial cake. The game of Fantasy baseball can be a very humbling experience and humbled I most certainly am.

Finally, I’d like to thank all the participants this year. It has been another fun-filled year and in the true spirit of the game I have been very fortunate to continue many good friendships and establish many new ones, playing one of the greatest games known to man. Good fortunes to all as we head into those last few crucial weeks.

By Tim McLeod
This entry was posted on Monday, September 7th, 2009 at 4:38 pm and is filed under BASEBALL, Fantasy Leagues, Tim McLeod. You can follow any responses to this entry through the RSS 2.0 feed. You can skip to the end and leave a response. Pinging is currently not allowed.