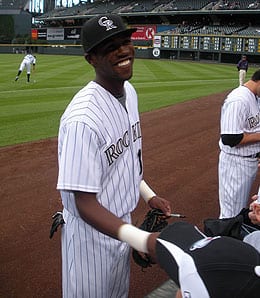 Owners who take a flier on Dexter Fowler may be smiling back at him before season’s end.

The 2009 RotoRob MLB Draft Kit continues today with our final installment of the Top 10 Lists Owners Fantasy Always Wanted But Were Afraid to Ask For. As an added bonus (how much do we love our readers?), here is an archive of all the Top 10 Lists:

When you get deep into your draft, it starts to become a bit of a crap shoot. But if you’re going to take fliers in that final round, why not select one with the RotoRob seal of approval? Here is a list of 10 players we like as last-round fliers.

1. Dexter Fowler, OF, Colorado Rockies: Fowler is my favourite sleeper rookie, though as Dickie V would say, “HE’S A RIP VAN WINKLE, BAY-BEE!!!” Which when translated into English (and Canadian, eh) means he’s a deep sleeper. Colorado has a lot of bodies out there even with Matt Holliday and Willy Taveras gone, but the team has pretty much proven to me they have no love for Ryan Spilborghs or Steve Smith, and Fowler has a ton of upside as he’d likely hit atop that Rockie lineup if he got the call.

2. Mat Gamel, 3B, Milwaukee Brewers: Yeah, I know his work at the hot corner makes Ryan Braun look like a young Scott Rolen, but the Crew has the uninspiring duo of Bill Hall and Mike Lamb penciled in ahead of Gamel. Sticking with the Braun example, Milwaukee broke camp in 2007 with Craig Counsell and Tony Graffanino at third base, but made the switch to Braun by late May. If Gamel gets the chance, he could make an impact around midseason.

3. Josh Fields, 3B, Chicago White Sox: Let’s go back to back with third basemen as Fields finally has a clear path with Joe Crede and his ailing back out of the Windy City. Fields hit 23 bombs in 2007 but washed out last year, thus dropping him off the radar of many a fantasy owners. He has had a very respectable spring and could be a steal if he re-emerges as the player everyone thought he’d be last year.

4. Alexi Casilla, 2B, Minnesota Twins: The Twins’ second sacker quietly posted a .281-7-50 line in fewer than 100 games and has plus speed (18 steals in 21 attempts over the past two years) to boot. The presence of Nick Punto and Brendan Harris means that Casilla may not be an everyday player when all three are healthy, but I’m rolling the dice on Casilla late in deep drafts.

5. Carlos Villanueva, RP, Milwaukee Brewers: Villanueva has had a rocky spring, but he went 2-2 with a 2.12 ERA and 62 Ks in 59 1/3 innings out of the bullpen last year. Plus, now that Trevor Hoffman is hurting, the ninth inning role is in his sights to open the season. He’ll probably end up as a set-up man for most of 2009, but don’t underestimate how quickly a 41-year-old closer can fade.

6. John Baker, C, Florida Marlins: Did anyone else happen to notice how well he played as a rookie last year? After posting an impressive .321 mark with Triple-A Albuquerque, Baker hit .299 with five home runs and 32 RBI in 61 games with the Marlins. I like him late in NL-only leagues or as your No. 2 backstop in deep mixed leagues that start two catchers.

7. Micah Hoffpauir, 1B/OF, Chicago Cubs: You’re just going to have indulge me here as I know Hoffpauir doesn’t carry the major league credentials of most of the players on this list. However, he hit .342 in limited work for the Cubbies last year and posted a .362-25-100 line for Triple-A Iowa. He’s a flier to be sure, but just take a look at Chicago’s outfield. Alfonso Soriano has missed 80 games the last two years, Kosuke Fukudome was a bust once pitchers figured him out and Milton Bradley couldn’t stay healthy if they played the game with a whiffle ball in zero gravity. I just love Hoffpauir’s potential.

8. Joe Crede, 3B, Minnesota Twins: Crede signed late this offseason, so is flying under the radar to an extent. That, combined with the competition that Brian Buscher is providing and the fact that Crede is coming off back surgery is causing many people to overlook him. But the fact is, Minny needs the pop that Crede can provide, so if he’s still sitting there in the final round, he could prove to be a very astute selection.

9. Randy Winn, OF, San Francisco Giants: This is a player that simply never gets any love, yet is consistently an attractive waiver wire choice early in the season once people remember he exists. Why not beat your fellow owners to the punch by actually drafting Winn?

10. Jared Burton, RP, Cincinnati Reds: Francisco Cordero is hobbling with a foot injury he suffered last fall and is getting lit up like a Christmas tree this spring. Burton, meanwhile, is completely off of most people’s radar, yet he stands to provide a fantastic return should Cordero get knocked out. We think Burton is worth the gamble.

Can the White Sox get back to the playoffs with Dewayne Wise batting leadoff? The Chicago White Sox enjoyed a great recovery last season, riding a strong rotation and great team power to 89 wins and the AL Central Division Crown. They put up little resistance to eventual AL Champion Tampa Bay in the playoffs, […]

Mike Brown is the fourth youngest coach to guide his team to a 60-win season. We’ve been so focused on the 2009 RotoRob MLB Draft Kit, that we’ve been remiss with our basketball coverage in the past couple of weeks. I thought I’d rectify that situation today by checking in on the NBA’s best team, […]

Matt Holliday has reason to smile, with the promise of huge bucks just around the corner. We’re back with more of the 2009 RotoRob MLB Draft Kit, today with another of the Top 10 Lists Fantasy Owners Always Wanted, But Were Afraid to Ask For. There’s nothing like the lure of a huge free agent […]

Now that Alexei Ramirez has shifted to the left side of the infield, he heads the list of tier two shortstops. By Tim McLeod and RotoRob We’ve got a little bit of time this afternoon before March Madness starts again, so we’ve hammered out more of the 2009 RotoRob MLB Draft Kit. We’re back with […]